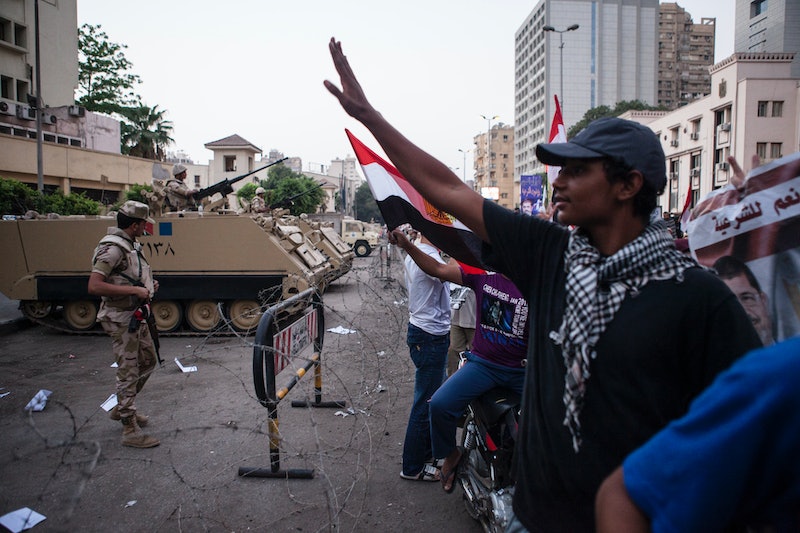 Only days after Friday's clashes left four dead, violence again erupted across Egypt between opponents and supporters of ousted President Morsi Sunday, the anniversary of the Arab-Israeli war, leaving at least 34 dead — the largest number since August's bloody protests that sunk the country into a state of emergency.

Thousands of Egyptians gathered in the city's central Tahrir Square to support the military and to mark the anniversary of the 1973 Arab-Israeli war, brandishing posters of General Abdel-Fattah el-Sissi and waving Egyptian flags, while soldiers blocked the entrances to the square with armored vehicles and barbed wire.

At the same time, pro-Morsi crowds of equal number demonstrated across Egypt, marching through the streets of the capital. Clashes between the protestors and security officials were reportedly prompted when demonstrators tried gaining access to the central square, with police forces firing gunshots into the air and using tear gas to stop the Morsi supporters from getting in — according to the BBC, at least 34 were killed and at least 80 were wounded in the fighting.

"There is a great deal of determination among the marchers to reach the square, despite the fear of the violence. They think they have as much right to be in the square as the pro-military groups," said one Al-Jazeera correspondent.

"The people have one demand: Remove el-Sissi and the president," the pro-Morsi demonstrators reportedly chanted.

According to officials, roughly 335 Morsi supporters were arrested across the country, some of them allegedly members of the Muslim Brotherhood.

The violence follows earlier warnings from the interior ministry that it would confront any "attempts that may disturb the 6 October celebrations", according to the Mena state news agency. Interim Prime Minister Hazem Beblawi had also called on Egyptians to "stand together, be optimistic about the future," calling it a "critical time" for the nation.Since Mohammed Morsi was militarily ousted in July, hundreds of protestors have died in the on-going violence. Sunday's death toll is the highest since the military crackdown on August 16, when over 500 Muslim Brotherhood supporters were killed. But the interim government is making legislative moves to quell public anger, including reviving a law that would allow the government to reduce the cost of fruit and veg by 25%, and raising the government staff's minimum wage.