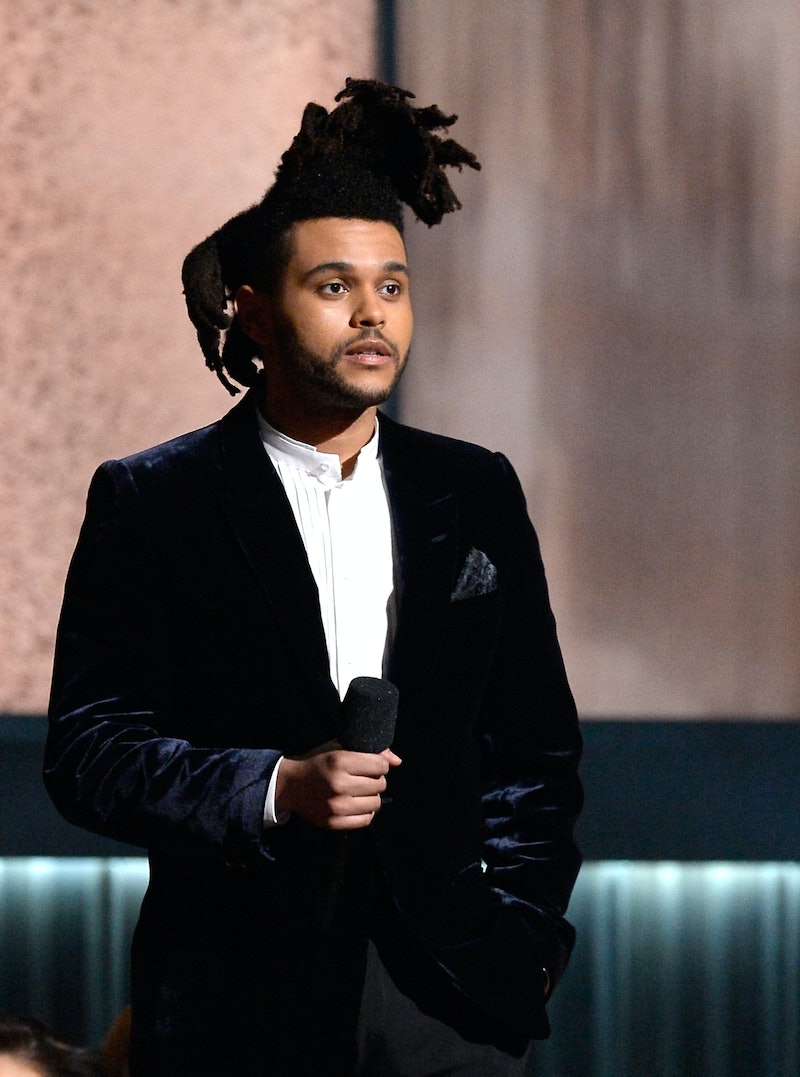 Thankfully, I’ve gotten over my thing for angsty boys — mostly. My boyfriend isn’t, like, 100 PERCENT SATISFIED WITH LIFE AT ALL TIMES, but he’s generally pretty cheery and positive. He doesn’t flaunt his angst all over the place. However, my celebrity crushes are the guys who slouch and brood and croon about how sad they are. The No. 1 heartthrob being Abel Tesfaye, a.k.a. The Weeknd.

Tesfaye isn’t perfect. Like basically every dude in the world, he’s something of a misogynist. My judgment is based on two things: The one-dimensional, hyper-sexualized girls that he sings about, and a comment from the first interview he ever did, with Complex Magazine. Asked about his signature “air of mystery,” Tesfaye answered, “In the beginning, I was very insecure. I hated how I looked in pictures... I was very camera shy. People like hot girls, so I put my music to hot girls and it just became a trend.” (Italics added for effect.) All the girls who front his songs, particularly on the mixtape House of Balloons, are skinny white girls. It’s kind of the opposite of Drake saying, “I like my girls BBW... so thick that everybody else in the room is so uncomfortable.” Which I don’t approve of either, for what it’s worth. Us girls are accustomed to being objectified, aren’t we? And fat women — and I don’t say “fat” negatively — are especially used to either being denigrated or fetishized. It really, really sucks. Kelly Faircloth wrote a good article about that particular Drake lyric for Jezebel.

SO, with the caveat that these guys are probably not the best of people...

Late-Night Smoke Sesh With The Weeknd

The Weeknd is the guy who sang, “Gettin’ sober for a day got me feelin’ too low,” so show up ready to party or have really strong willpower. I would wear sweatpants, but sexy sweatpants. Luckily, leggings are the marriage of loungewear and wanting to show off your butt! Another sartorial consideration: You’re going to be sloshing your drink around, at least if your drunken balancing act is anything like mine. Wear a top that you don’t mind spilling on. A black graphic tee that you messily cut into a crop top is a good call. Bellies are great so feel free to put yours on display, no matter how squishy it is!

I haven’t kept up with Panic! At The Disco since Vices & Virtues came out, but I still think Brendon Urie is a total babe. Based on his hats, facial hair, and tattoos (*cough* HIPSTER *cough*), I’d take him to the spacious Blue Bottle Coffee in Oakland, where we would order iced New Orleans chicory-flavored coffee. (Actually I would get something decaf because otherwise I have heart palpitations. That is an exaggeration.) To fit the locale, I would build my outfit around a brown leather purse — a boho satchel from Buffalo Exchange, perhaps with fringe. Gladiator sandals. My imaginary date is taking place in May or June. As a finishing touch, I would layer two bronze-ish necklaces and lots of mascara.

Daveed Diggs is not as famous as the other stars that I’ve mentioned. He’s the front man of Clipping, a semi-obscure noise-rap band. They are BRILLIANT. I’m really bad at explaining why I like the music that I like, but Clipping is genius. If you enjoyed, say, Yeezus by Kanye West, then you will probably enjoy Midcity by Clipping. Here’s a measure of how good the band is: I spent money on Clipping even though most of their stuff is available for free on the internet.

Daveed Diggs specifically is “an actor, rapper, writer, and educator, in no particular order.” He’s been in numerous plays and released a solo album, Small Things To A Giant, which you can download for free. Diggs is a fluent MC and his lyrics are full of surprising images — some of which are gut-punches. Clipping’s music especially is not for the faint of heart; they dabble in horror stories.

Anyway, going to an experimental art show with Daveed Diggs, I would wear a dress. Dresses are my favorite garments; I feel most confident when I’m femmed up. To counteract any frills or lace, I would wear dark lipstick — something deep purple or coppery. Boots with a slight heel, or perhaps proper stomping boots like my boyfriend’s heavy Doc Martens. Silver bracelets, preferably chunky, would complement the entire ensemble.

There you have it! Those are my celebrity dream dates, and the accompanying sartorial choices. Feel free to hit me up on Twitter if you think any of my outfit concepts were misguided, and I will adjust my mental image(s) accordingly.

More like this
Beyoncé Wore A Golden Sheer Gown At Her VIP Dubai Concert
By Sam Ramsden
Harry Styles Has Become An Accidental Vinted Model
By El Hunt
Austin Butler Recalls Lisa Marie Presley Showing Him Elvis’ Bedroom
By Jake Viswanath
Linda Ronstadt’s “Long Long Time” Plays A Pivotal Role In The Last Of Us
By Brad Witter
Get Even More From Bustle — Sign Up For The Newsletter
From hair trends to relationship advice, our daily newsletter has everything you need to sound like a person who’s on TikTok, even if you aren’t.