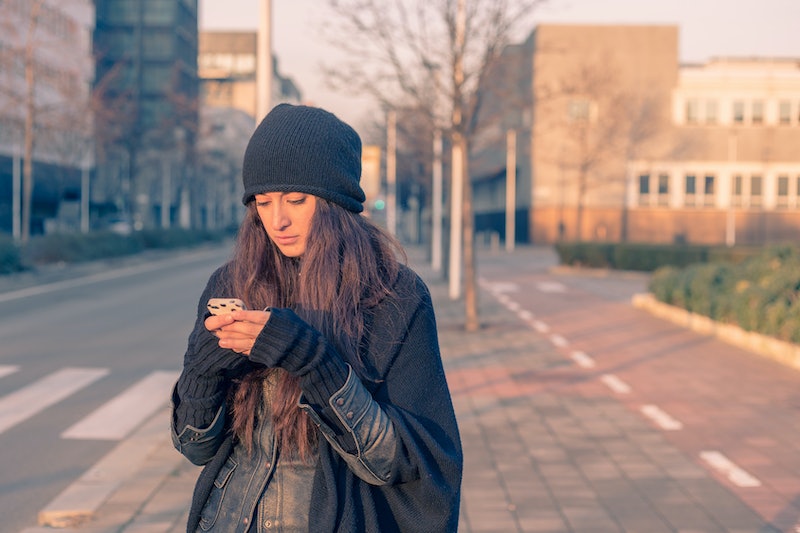 Doing things with people is hard. That may seem like an unreasonably simplistic assertion, but it’s true. Even if you’re meeting up with someone you really like to do something you really enjoy, the prospect of putting on clothes, leaving the house, spending money, and being charming can be daunting. DAUNTING.

This impulse to stay snuggled up indoors with Pad Thai and Candy Crush is exacerbated by the fact that there are thousands of ways to bail on a person — via text, email, Facebook message, Snapchat, and more. Technology not only facilitates the canceling of plans, but also helps corroborate lies made to get out of said plans. (The basics: Don't Instagram a partying selfie if you told another friend you were sick. Do send a sad Snapchat selfie to the friend you told you were sick, with the caption, "Mehhhhhhh I hate my immune system.")

This technology-mediated flaking phenomenon has been brewing for a while. The Times was on it in 2012: “Not long ago, the only way to break a social engagement, outside of blowing off someone completely, was to do it in person or on the phone. An effusive apology was expected, or at least the appearance of contrition,” wrote Caroline Tell.

More and more, we feel compelled to lie about the reason why we're canceling plans, maybe so we can seem like better people. A 2012 British study found that 65 percent of people who cancel plans at the last minute are lying about the reasons why they can’t meet up.

Lying and flaking go hand-in-hand. If you flake out of plans at the very last minute, you may craft a lie to make your flaking more understandable, less awful: I have food poisoning. My dog has food poisoning. I have to stay late at work or else I’ll get fired. Lies where, if they were true, no reasonable person could fault you for bailing.

1. You’re not as good a liar as you think you are.

There’s only one thing worse than being bailed on last minute, and that’s being bailed on via A TRANSPARENT LIE last minute. You think you're slick saying you have the flu every time you don't feel like going to Brooklyn? You're not slick. Not slick at all.

"It's usually pretty easy for me to tell when people are lying for why they can't meet up," a friend told me at brunch recently. "I don't really believe that your dog ate a marijuana brownie and is tripping on your couch for the second time this month. People really aren't that rigorous with their fake excuses."

2. Because it's hard keeping track of lies, however small.

The last time you bailed on Ashley, did you tell her it was because your second cousin in China died and you were attending the funeral via Skype? If that's the case, you probably won't want to use that one on her again. See, keeping track of all these lies is already so overwhelming!

Getting wrapped up in a series of lies can make you feel trapped. "If you’ve ever found yourself holding onto a lie, you know the feeling of freedom that comes when you are able to tell the truth," writes Donna White for Psych Central . "When we tell the truth we feel better mentally and physically."

3. You shouldn’t be making plans you know you don’t want to go to in the first place.

Even though lying to get out of something at the last minute feels like a spontaneous decision — ugh, I just don’t want to go, I’m tired and can feel a pimple brewing on my nose — there’s a good chance when you made the plans (they seemed so far away!) that you knew you wouldn’t be excited about actually doing them. Before you make the concrete plans, try to envision yourself doing the thing you’re agreeing to do. Put yourself in Future You's position: Will you actually want to grab drinks on a Monday night, the same Monday you'll likely be ambushed by your period? Probably not. When you lie to get out of an obligation, you're divorcing yourself from the reality that you never wanted to do it — and should never have agreed to —in the first place.

Richard Gunderman puts it perfectly in The Atlantic:

When we are honest, we ground ourselves most completely in the world we actually inhabit, being as real as we can with others, and reducing as much as possible the distance between the way things seem to be and the way they really are. In the final analysis, honesty means avoiding illusion and unreality, instead keeping life as real as we possibly can.

4. It feels awful when you're on the other end.

As previously discussed, leaving the safety of your apartment for any sort of social engagement is a struggle. That's why it feels awful when someone bails on you after you've arranged your day based on these plans; after all, you set aside time to pluck your eyebrows, put your face on, and not eat a pound of jelly beans so that you had room for soup dumplings.

5. It feels awful when you're on this end, the lying end, too.

Lying can cause significant spikes in anxiety. A University of Notre Dame study, "The Science of Honesty," found that participants who reduced the amount of lies they told in a 10-week period experienced dramatic improvements in physical and mental well-being. Those who minimized their white lies felt less tense and sad, and reported fewer physical complaint — of sore throats and headaches, for example.