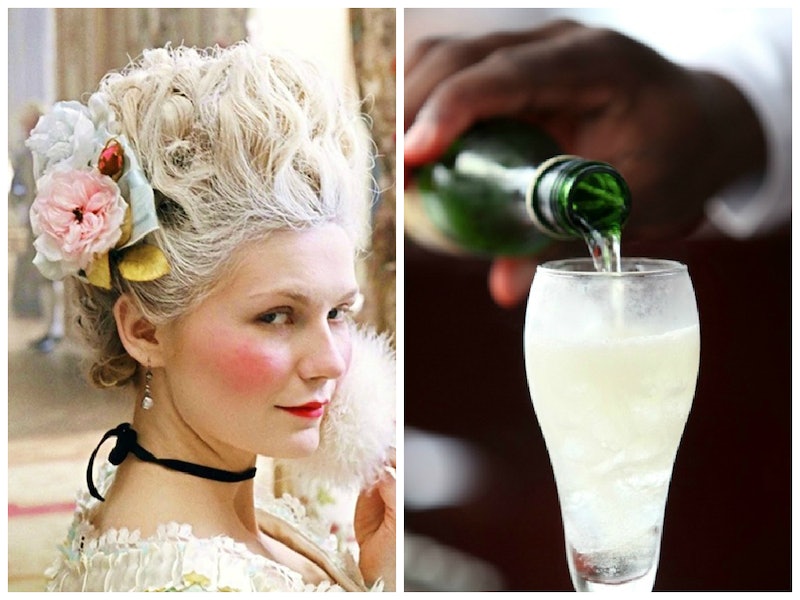 Recently, I've started getting into cocktail culture, mixing various syrups and sodas with both liqueurs and liquors. It's a throwback to underground saloons in the 1920s when Prohibition was strict — though not well-enforced, judging by wild parties from The Great Gatsby. Sipping a drink with more than two ingredients, out of a glass rather than a red Solo cup, makes me feel fancy and dramatic. So I have to assemble fancy, dramatic outfits to enhance the atmosphere, right?

When you delve into a new endeavor, such as learning about aesthetic alcohol imbition, which I want to be the noun form of "imbibe" but apparently isn't, start with the classics! (Similarly, I suggest that rookie fashionistas start with dresses. Everybody, wear dresses all the time! Or if dresses aren't comfortable with your gender expression, ask somebody else because I've exhausted my advice.) In order to start with the classics, you have to figure out what the classics are. I had a vague idea, ready to mention hyper-popular drinks like Margaritas and Martinis. However, I wanted to expand my horizons! (On my horizons, a Tequila Sunrise dawned. Bahaha. I'll be here all week.) Anyway, I searched "best cocktails" and immediately clicked on a list by Serious Eats blogger Michael Dietsch, "25 Cocktails Everyone Should Know." Dietsch has different reasons for perusing these recipes:

I will wear that dress and everybody will cry because I will be an angel of booze, visiting the plebs bearing a platter of delectable drinks. Such as...

An Old Fashioned, Basically Made Out Of Sugar

This cocktail pops up fairly often in literature but I was intimidated because I don't have much vintage cred. I routinely shop at thrift stores, but depressingly often I just buy castoffs from Target. (Mossimo is my brand, yo.) As it turns out, an Old Fashioned simply consists of whiskey, sugar, and bitters. Actually, it's somewhat more flexible; Michael Dietsch reminds us that "the original definition called for spirits of any kind. You can make a tasty Old Fashioned from whiskey, of course, but also from tequila, mezcal, brandy, rum," or whatever "robustly flavored spirits" you have at your disposal. As to the other essential ingredients, if you're like me and don't know what "bitters" are, foodie blog The Kitchn will teach you to make them yourself.

Important part: What will you wear while you drink this? The Old Fashioned is an appropriately antique cocktail, so I suggest going whole-hog and dressing modern-medieval. I delight in the irony that anachronism is always trendy, although the fêted decade varies. Off-white peasant blouse, warm-colored vest, and a long earth-toned skirt. Bam.

The Daiquiri, For Your Citrus-Berry Sweet Tooth

Another Serious Eats writer, Paul Clarke, admonishes us that "an old-school daiquiri is an exercise in purity, as beautiful in its unadorned simplicity as a well-made Martini or Manhattan. Of course, 'well made' is a big factor here... to fully realize the daiquiri's inherent beauty, be sure to measure your ingredients; free-pouring... frequently leaves you with an odd-tasting drink." Yessiree. The ingredients for the basic daiquiri are rum, lime juice, and sugar. I advise ignoring Clarke's austerity and making a frozen strawberry version! When drinking strawberries, wear pink. Do it on a Wednesday. And display this gilded poster on your wall:

The French 75, Gin And Champagne And Cherries, Oh My!

The French 75 is truly an obscure cocktail. I'd never heard of it before reading the Serious Eats list. Notable ingredients are, as I mentioned, gin and sparkling wine and a "cocktail cherry," which I am choosing to interpret as "maraschino cherry" because I love those things.

This is a Francophile drink. Either go classic and dress baroque, like Marie Antoinette, or play the monochrome minimalism card and emulate Chanel instead.

Save yourself the workout and use a blender to make this New Orleans favorite, which contains cream, egg whites, multiple kinds of citrus, and most crucially, gin! Can't be a Gin Fizz without gin. (A similar, tempting concoction is the Pisco Sour.) Because of the un-resemblance to an egg cream — egg creams are actually both dairy and egg-free — now's your chance to ironically evoke 1950s New York, the proverbial golden age of the diner. Wear a poodle skirt! Or a dainty pleated skirt with a cardigan tucked in, if your taste is little more understated.

The reality is that you should wear whatever strikes your fancy, or is otherwise practical, at any given moment. (As I write this, I'm curled up in owl-patterned pajamas. So.) That is the reality — but who wants reality? Often I prefer the fantasy, in which my careful clothing choices weave an aesthetic dream, making my experiences more special and memorable. I want to have a healthy relationship to alcohol, and part of that is focusing on the capital-e Experience instead of rapidly getting crunk. (For me, that's what it means. Your choices are your own choices; your reasons are your own reasons.) Dressing intentionally makes every aspect of my life more special, including partying.

More like this
Phoebe Dynevor Serves ‘Bridgerton’ Underboob In Stunning Floral Gown
By El Hunt
5 Signs You Have A Toxic Relationship With Yourself
By Lexi Inks
23 Super Sweet Things To Write In A Valentine's Day Card
By Karen Belz and Lexi Inks
What Is Pamela Anderson’s Net Worth? She Was Never Paid For Her Stolen Sex Tape
By Hugh McIntyre
Get Even More From Bustle — Sign Up For The Newsletter
From hair trends to relationship advice, our daily newsletter has everything you need to sound like a person who’s on TikTok, even if you aren’t.