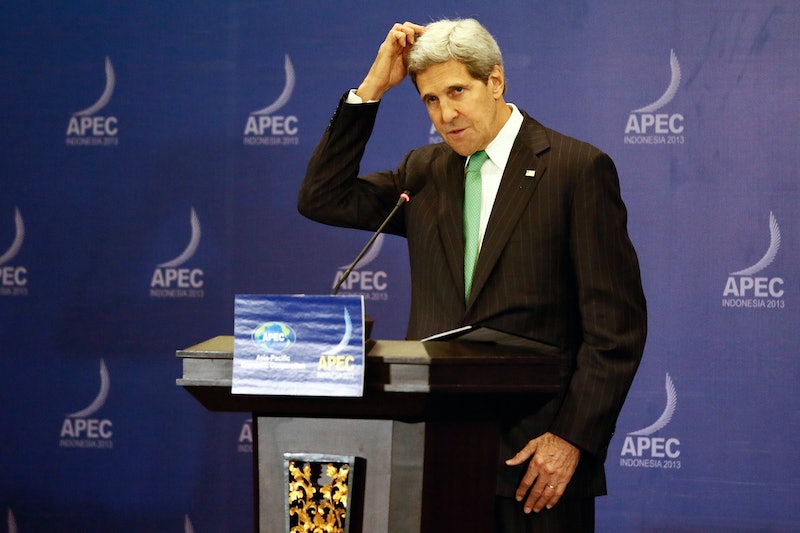 A day after the Libyan government accused the U.S. of "kidnapping" a suspected terrorist and Libyan citizen, Secretary of State John Kerry defended the use of American Special Forces in the capture of the wanted suspect, saying the accused was a "legal and appropriate target" for the U.S. military.

The weekend raid in the Libyan capital of Tripoli captured an alleged Al Qaeda leader, Nazih Abdul-Hamed al-Ruqai. He's also known as Abu Anas al-Libi, the suspected mastermind behind the the U.S. embassy bombings in Kenya and Tanzania in 1998 that killed over 220 people. Libi is thought to be behind an al Qaeda manual that offers instructions for "blasting and destroying the embassies and attacking vital economic centers," which has been used as evidence in several trials involving terrorist activity in recent years.

The capture prompted complaints from the Libyan government, who appeared to have been taken by surprise by the military action.

"I hope the perception is in the world that people who commit acts of terror and who have been appropriately indicted by courts of law, by the legal process, will know that United States of America is going to do anything in its power that is legal and appropriate in order to enforce the law and to protect our security," Kerry told reporters Monday.

According to a report from the New York Times, the suspect is currently being held in military custody on a Navy ship in the Mediterranean, the U.S.S. San Antonio, which was brought in especially for the operation. Although he's still being interrogated, he's expected to be taken to New York for criminal prosecution.

"I think it's important for people in the world not to sympathize with alleged terrorists but to underscore the importance of the rule of law," he added, saying also that Libi will have a chance to defend himself, having been indicted by a U.S. court.

"An indictment is an accusation," Kerry said. "In our legal system the defendant is presumed innocent until proven guilty, but he will now have an opportunity to defend himself and to be appropriately brought to justice in a court of law."

This isn't the first time the Obama administration has held and interrogated a terrorist suspect without a lawyer present. In 2011, an ex-military commander of the Somali terrorist organization Al Shabab was captured by the U.S. military and interrogated for roughly eight weeks, without having been read his rights, or given access to an attorney. He was eventually advised of his rights (which he waived) and sent to New York for prosecution.

Kerry also took the opportunity to point out that, in spite of improved relations between Iran and the U.S., Washington won't be letting Iran off the hook over its nuclear program, and won't remove its missile defense system aimed to intercept an Iranian attack.

“We’re waiting for the fullness of the Iranian difference in their approach now. But we’re encouraged by the statements that were made in New York, and we’re encouraged by the outreach,” Kerry said, adding: “It’s way too premature to make any determinations about where we would wind up with respect to the deployment of the missile defense. As long as that threat is there, we still have to deal with that issue.”

The weekend raid in Africa was one of two by American Special Forces. The second was a failed mission in Somalia that had been intended to seize a member of Al Shabab, the Somali terrorist group who took responsibility for last month's hostage crisis in a Nairobi mall. Although the first Libyan raid was successful, there are concerns that the capture will prompt angry reactions from terrorist groups, as well as accusations directed at America regarding the legality of the capture.