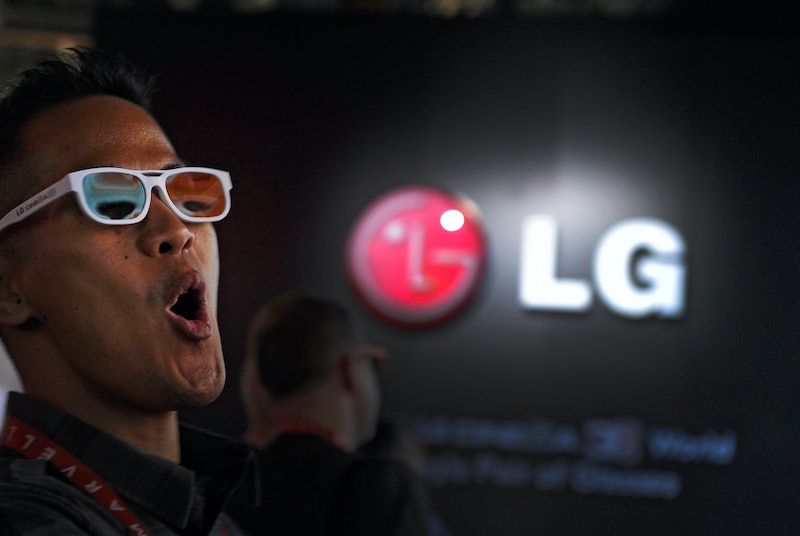 Samsung's dead serious about hitting Google and Apple where it hurts: innovation. Not only is the South Korean company developing curved smartphones — closely following LG's lead, who announced Monday that they will mass-produce a curved panel for their new line of phones — and selling gold phones, but they're also apparently developing a cheaper version of Google Glasses. Samsung has already shown itself to be a first-rate contender for contribution to the trend of "wearable tech," and is likely hoping to make the intelligent-glasses idea more mainstream.

The rumor comes courtesy of Russian blogger Eldar Murtazin, who has a track history of being right about these things. Murtazin said in a Tweet Monday that the company would launch glasses under its Gear line, and the product is temporarily labeled "Gear Glass," though the final version might be hit with copyright issues from Google if they're sold under that name. Murtazin said to expect the product next spring, in April or May.

Also on Monday, smartphone leader LG beat Samsung to the punch by announcing that it would mass-produce a curved plastic screen. The "panel" will likely be used in the company's first line of flexible smartphones, rumored to be launched next month. LG is calling their panel "the world's first flexible OLED panel for smartphones," and it's designed for a line of models that are bendy, plastic-screened, and "unbreakable." Over at Samsung, they're developing an almost identical panel with the same idea in mind, according to rumors that have been flying for months. The two companies are going head-to-head to launch what they hope will be the tip of the iceberg for flexible smartphones, which will in turn break new ground for the growing trend of "wearable tech."

LG's smartphone panel uses OLED technology, which is the same kind of panel used in LG's curved televisions — which, at $13,000, no-one really bought, though they're hoping this time will be different. It's plastic rather than glass, and so won't shatter or get scratched easily, and can adhere to a variety of shapes and sizes. Critics have been predicting for a while that a new type of smartphone screen is in the works — a "rollable," even "transparent," model of "wearable technology," which is literally technology you can wear on your body, like smartwatches — but, until now, companies have rejected them because they're difficult to design and construct. OLED screens need to be kept away from air and moisture, so they have to be encapsulated by another material to work effectively.

Next month, LG is tipped to launch a new line of curved smartphones, with Samsung hot on its heels. If the trend takes off, it could easily lead to a new generation of gadgets, including tablets and even computers. The initial prototype for LG's models looks like this, according to The Verge :

The design feeds into the rise of wearable technology, which has already seen limited success with Google Glass and smartwatches, and will probably see more when Apple brings out its long-rumored smartwatch, production of which has been under wraps for months. These won't act exactly as your phone does, but will act as a more compact alternative to your larger phone, tablet, or computer: it'll take photographs, notify you of messages, inform you about weather changes (not to mention, you know, the time) and so on.

This is all getting a bit Minority Report, but watch this space... which, if LG and Samsung have anything to do with it, will be on your wrist before too long.

More like this
20 Smart Devices Under $35 That’ll Change The Entire Vibe Of Your Home
By Emma Carey
Here's How To Get Your iPhone To Update Automatically Forever
By Emma Carey
The 8 Best Headphones For Pelotons
By Megan Gray
The 5 Best Bluetooth Label Makers For Your Home, Office & Beyond
By Rachel Dunkel
Get Even More From Bustle — Sign Up For The Newsletter