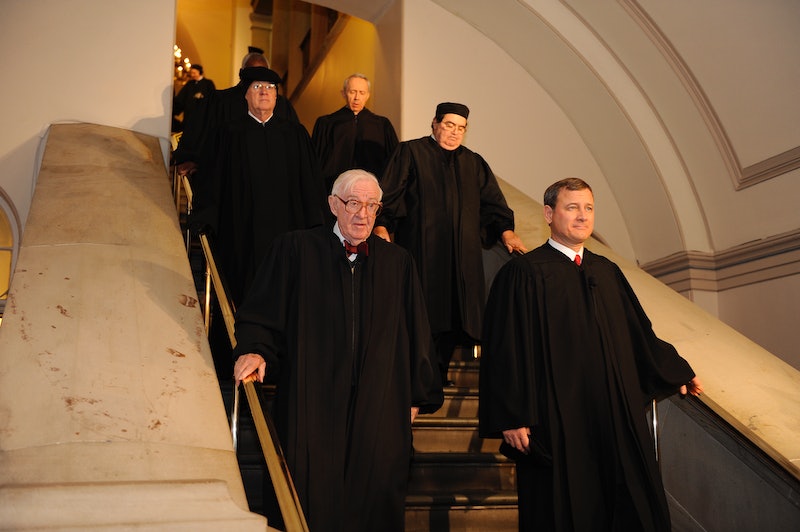 Perhaps in an effort to stay in the headlines, the Supreme Court has decided to hear a docket of highly-controversial cases this term that really run the gamut of hot-button topics, including abortion, affirmative action, campaign contribution limits, and presidential recess appointments.

The government is officially still shut down, but the court will remain open until at least October 11, at which point it will reevaluate its continued operation amidst the shutdown. Chief Justice John Roberts opened the court’s new term this morning, announcing the appointment of the court’s new clerk and making no mention whatsoever of the government shutdown.

Amongst the cases on the docket are McCullen v. Coakley, a First Amendment case centering on the rights of abortion protesters. In 2007, Massachusetts enacted a law mandating that protesters remain at least 30 feet away from abortion clinics whilst protesting. The law was upheld by the First Circuit, but opponents say it violates their right to free speech and assembly. The “Coakley” in question, by the way, is state Attorney General Martha Coakley, who lost to Scott Brown in the 2009 Senate election to replace Ted Kennedy but was subsequently reelected as AG.

The court will also hear McCutcheon v. Federal Election Commission, which addresses on how much money individuals are allowed to donate to political parties and candidates; Schuette v. Coalition to Defend Affirmative Action, which hinges on whether Michigan violated the Equal Protection Clause when it amended its constitution to ban affirmative action; and National Labor Relations Board v. Noel Canning, a case about the constitutionality of President Obama’s recess appointments to the National Labor Relations Board.

Meanwhile, Justice Antonin Scalia made headlines over the weekend when he insisted in an interview that he has gay friends and doesn’t hate people who have gay sex, which is the kind of eyebrow-raising denial most people don’t feel the need to make in the first place. He also accused his interviewer, Jennifer Senior, of getting the facts “completely wrong” about a court anecdote when, in fact, she had the facts completely right. This resulted in a fact check of the entire interview by Huffington Post, in which they found three erroneous claims, but we suspect that when you’ve got a lifetime appointment, fact checks don’t really get you down all too much.