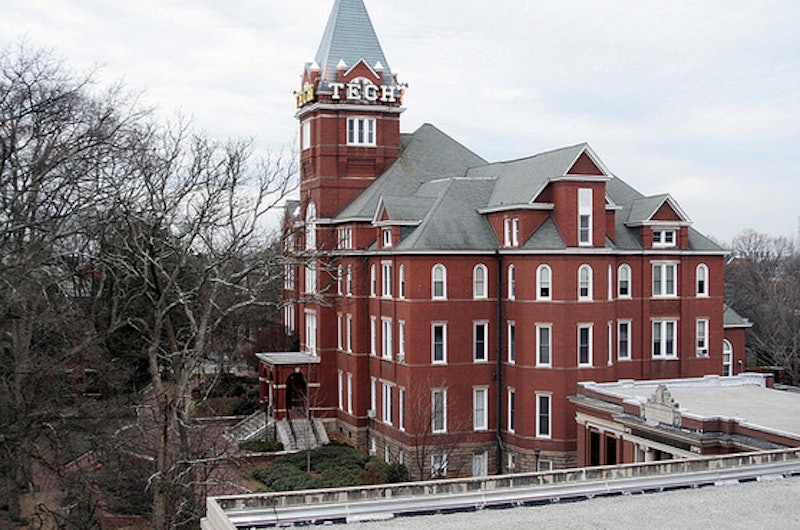 The social chair of Phi Kappa Tau's Georgia Tech chapter is rightfully being publicly shamed internet-wide for his ultra-rapey guide to getting girls into bed, which he distributed via email to his frat bros. Aside from the obvious fact that this missive advocates getting girls drunk, taking advantage of them and then kicking them out of bed, there's something else about this gross letter that seems...off. It smacks of a high schooler boasting about summer camp sexual exploits that never actually happened. Here's quote evidence that this guy has probably never actually interacted with a woman.

Exhibit A: First, introduce yourself and get their name, ask if they are having a good time, and then ask if they want anything to drink. If they say yes, walk them to the bar and tell them what we have to drink. If they say no and they look like they are in a sorority, ask them if they are in a sorority (DUH). If not, choose one of the following: where are you living, where are you from, have you been here before, how are classes going, or where all have you been tonight. Then proceed to have a conversation.

Nothing gets a girl interested like a stiff, awkward dude that uses a list of scripted talking points in order to get her comfortable enough to dry hump with him on the dance floor. Maybe just engage in casual conversation and assess if there's an attraction — then you won't have to trick anyone into hooking up with you?

Exhibit B: Ask her to dance. DANCING IS FUN!!!!! Always try to dance. If she does not want to dance and is with friends, say “aw thats no fun.”

Seriously? 'Aw, that's no fun'? Thanks for that panty-dropper of a conversational gem.

Exhibit C: Grab them on the hips with your 2 hands and then let them grind against your dick.

Whoa, that escalated quickly now didn't it! I totally love when a near-stranger grabs me aggressively and grinds up against me with his crotch. PSYCHE! When this happens on the subway I consider alerting authorities. It's not out of the realm of possibility that a girl may react similarly on a frat house dance floor.

Exhibit D: If she starts putting her hair over her ear, THAT MEANS SHE WANTS A KISS.

Exhibit E: You can make-out with her (tongue on tongue), you can stick your hand up her shirt (not right away though), you can go for a butt grab (outside or inside the shirts), or use your imagination.

In case you needed a primer on what making out means! Also, a butt grab is administered "outside or inside the shirts"? This guy seems to be a little confused on the correct layout of the female anatomy. He sounds kinda like Steve Carrell describing a breast as feeling like a bag of sand.

Hopefully the girls of Georgia Tech are wise enough to keep this dude's probable-virginity intact.

More like this
The Differences Between Kinks & Fetishes, Explained
By Lexi Inks
Breeding Kinks Have Been On The Rise Since Roe V. Wade Got Overturned
By Lexi Inks
Are Quality Time & Gift-Receiving Love Languages Compatible?
By Lexi Inks
It's A Pleasure #53: Help! My Boyfriend Won't Tell Me Why He Stopped Going Down On Me
By Sophia Benoit
Get Even More From Bustle — Sign Up For The Newsletter