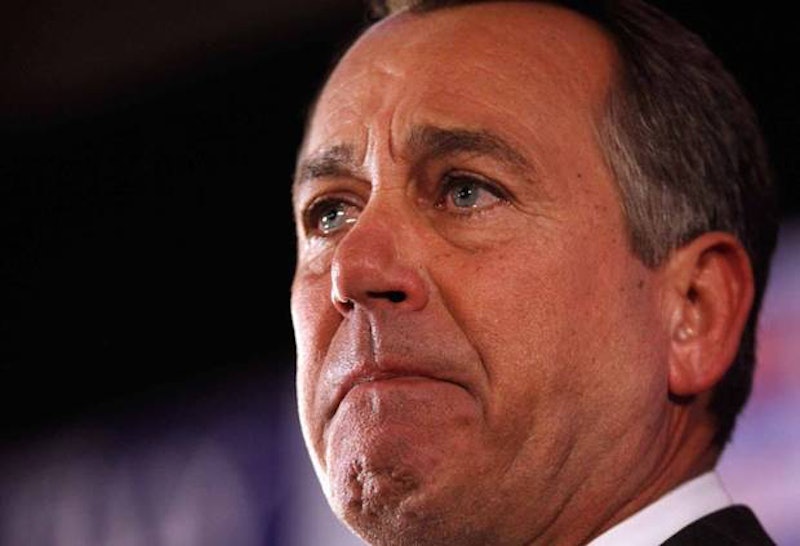 After launching a successful effort to shut down the government last week, congressional Republicans quickly pivoted and started blaming Democrats for shutting down the government. They’ve been hitting that drum ever since, and some very powerful Republicans even seem to think it’s working. But it isn’t, as the latest in a series of polls shows.

A Pew survey out today has Americans blaming Republicans over Democrats for the shutdown by an 8 point margin, with 38 percent faulting the GOP and 30 percent faulting the Obama administration. What’s more, 70 percent disapprove of how Republicans are handling budget negotiations, compared with only 24 percent who approve—a net -46 point approval.

To be fair, congressional Democrats aren’t exactly being applauded for their behavior. Only 35 percent approve of how they’re going about the budget talks, compared with 61 who disapprove. That puts them 26 points in the hole, which is hardly something to brag about. Still, that’s significantly better—or significantly less worse, depending on how you look at it—than public perception of the GOP.

Lest you think this is an outlier, an ABC News/Washington Post poll released today showed even worse results for the GOP. In that survey, 70 percent of Americans disapprove of how congressional Republicans were going about the budget talks, compared with 51 percent for Obama.

“The polls are shifting against the Democrats,” RedState’s Erick Erickson proclaimed yesterday. But they aren’t: A Pew survey taken just before the shutdown also had Americans blaming the GOP over Democrats for a possible shutdown, but only by 3 percent. And in the ABC/WaPo poll, disapproval of Republicans’ conduct rose 7 points in the last week amongst Republican respondents. So, the polls are indeed shifting against someone, but not the Democrats

Nor are the polls shifting against President Obama. Perhaps the most stinging indictment of the Republican strategy is that a week after the shutdown, Obama’s standing has actually increased, albeit only slightly. In the new Pew poll, 45 percent approve of how the president is going about the budget negotiations, up from 41 percent last week. That’s a very small increase, to be sure, and he’s still underwater. The fact remains, however, that after shutting down the government and tirelessly blaming it on the Democrats, all Republicans have to show for their efforts is a hit to their own approval ratings and slightly more popular president.