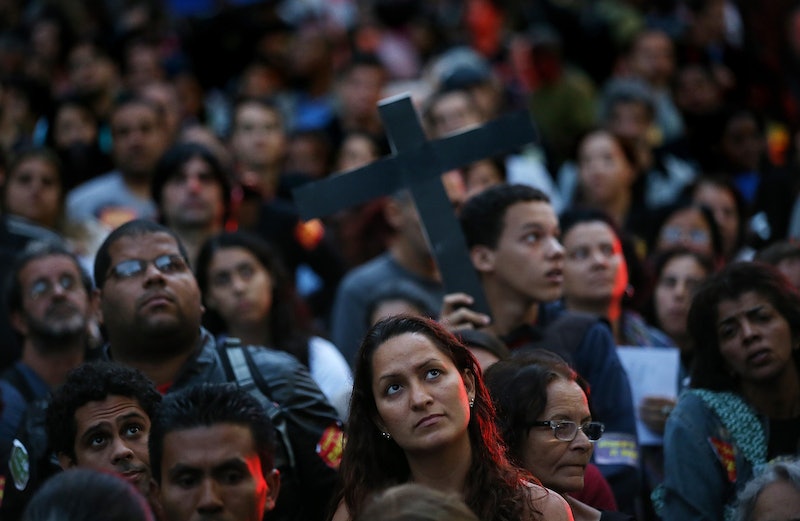 Following a wave of union-organized demonstrations over the last few weeks, tens of thousands of protestors gathered in Rio de Janeiro Monday to demand better pay for teachers, quickly clashing with police.

According to the teachers' union, roughly 50,000 people gathered in the Brazilian city Monday night (although police estimate a number closer to 10,000) to support the educators and protest against the brutality of the police tactics used in earlier demonstrations. In spite of a peaceful beginning, violence broke out as a small, masked group of protestors smashed a City Hall gate, while others threw firebombs at public buildings. Several of the group — known as the "Black Bloc" — forced their way into banks and tried to ransack ATMs, setting some of the banks on fire and stealing furniture from the buildings to barricade themselves against police. Security forces responded with tear gas, and still more protestors set a bus on fire on a main street in the city's center.

A similar demonstration in Sao Paulo ended the same way, with hooded youths breaking into banks and clashing with police. Teachers in Brazil have been on strike to demand better salaries for two months now, and have already rejected the government's offer of a 15 percent pay raise.

Since June, demonstrators have staged marches and street protests across the country, calling on the government to spend less money on the 2014 World Cup and pour more funds into health and education. In mid-June, over 200,000 people marched through Brazil's largest cities — the largest protests the country had seen in decades. The police's forceful responses to the protests quickly brought authorities under criticism, with protesters accusing politicians of nepotism and corruption, in spite of several concessions being made.The police force in Brazil has in fact been notoriously brutal for years — according to a 2009 report, Human Rights Watch (a U.S.-based watchdog group) estimated that roughly 11,000 were killed by police in Rio and Sao Paulo between the years 2003 and 2009, a number backed up by a 2008 United Nations report.In a separate development, the latest leak from ex-government contractor Edward Snowden has put Canada in diplomatic hot water with Brazil. The recently released documents show that a Canadian intelligence agency had kept tabs on a top Brazilian diplomat, as well Brazil’s mining and energy ministry, fueling Brazil's growing resentment towards Western intelligence agencies who appear to target the nation. Brazilian President Dilma Rousseff has demanded an explanation from Canada but — at least publicly — the demand has been met by silence.