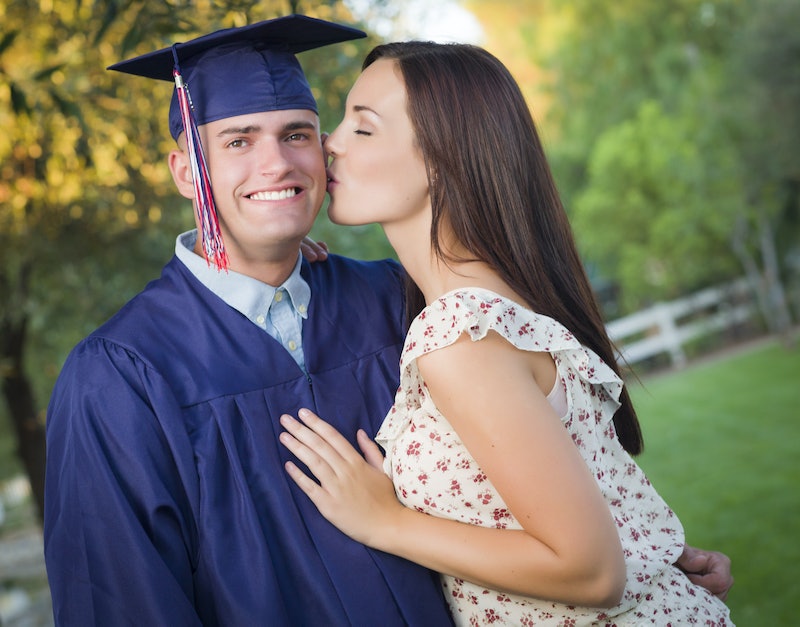 Almost one-third of married couples on Facebook were college sweethearts, according to a new study. And 15 percent of Facebook marrieds attended the same high school. The numbers come from Facebook's data science team, which analyzed anonymous data of U.S. couples over age 25 who classified themselves as "married" on Facebook. Couples who attended both the same high school and college were tallied as having met in high school.

"The count is a rough proxy for the chance of finding a spouse at the school,” said Facebook researcher Sofus Attila Macskassy. Though couples included in the study had to have attended high-school or college within four years of one another, there's no way to tell from the data whether they met/started dating while in school or after. The statistics also reflect primarily heterosexual married couples, Macskassy notes.

Interesting social patterns emerged from the data: Married couples who met in high school were more likely to come from rural than urban areas. Couples who met in college were more likely to come from small, conservative and religious colleges. More than half of Brigham Young University graduates on Facebook went "from classmates to soulmates," as Macskassy writes in a post about the research. Here are the rankings for which colleges were most likely to produce graduates with same-school spouses:

The 12 colleges in green are those that made both lists.

For women, the majority of colleges in the top 25 have a religious affiliation and a relatively equal proportion of male and female students (though the top college, Rose-Hulman Institute of Technology, has a student body that's 88 percent male). At all top 25 schools, half to 70 percent of female graduates married someone from the same school. For men, most of the top 25 colleges also had even gender ratios. About half to 67 percent of male graduates married a fellow alumni.

This map shows high-schools across the U.S., with red signifying it's very likely to for classmates to marry in those areas and blue meaning it's less likely.

More like this
The 19 Best Tweets & Memes About Bisexual Awareness Week
By Lexi Inks
How To Politely Reject Someone Who Keeps Asking You Out
By Laken Howard and Lexi Inks
21 Signs You're Not In Love Anymore
By Sara Altschule, Kathleen Ferraro and Carolyn Steber
10 Ways To Be More Empathetic To Your Partner
By Raven Ishak and Lexi Inks
Get Even More From Bustle — Sign Up For The Newsletter