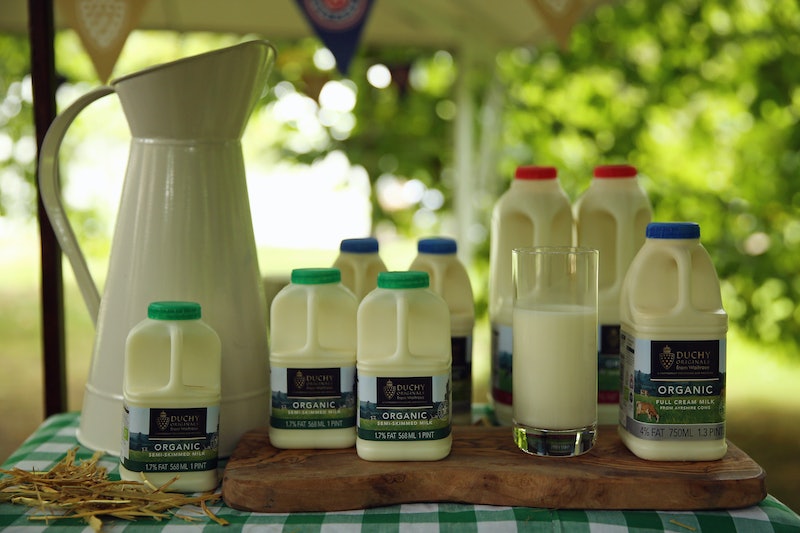 If you think that the world is getting a tad futuristic with all of these "smartwatches" and intelligent dairy products, you ain't wrong. LG just began mass-producing flexible plastic phones; scientists have been growing tiny organs from scratch in laboratories; there are at least two reality shows and several vessels planning to put humans on Mars in the next couple years; and, if you're the morbid sort, you can purchase a watch that counts down the rest of your life.

Oh. You thought that was it? Not even close. Here's some more crazy stuff on the horizon:

Milk jugs want to be intelligent, too.

Say goodbye to the humble milk carton. Quirky, the invention-extraordinaire company with 100 crowdsourced products already in stores, ran a collaborative "let's all invent things, guys!" competition, and came up with Milkmaid. The cute little glass vessel has a built-in sensor to tell you exactly how fresh the milk is, gradually changing color from green to orange as the milk grows older and sourer. Because when you live in a world in which you can have your face designed on your latte, isn't picking up and sniffing your milk carton all a little bit 90s? It also just looks nicer than any milk carton we've ever seen. Seriously: if Apple made milk (iMilk) this would be what they came up with.

Want to smell food through your smartphone? Of course you do.

Being able to inhale that sweet, sweet burger scent while eating a salad isn't everyone's idea of a good time, but at least we all now have the option. Japanese company Scentee has made little cartridges that plug straight into your smartphone's jack, dispensing the aroma of your choice: ribs, buttery potatoes, soup. Emkay. The idea, at least according to this odd promotional video, is that you sit back and eat bland rice or something, and your nose thinks you're eating prime ribs and is perfectly happy. And then you're skinny. Still, you know you want to try it.

Self-healing materials will mean that nothing breaks again.

Scientists have known for a while that you can get some kinds of broken materials to fix themselves with the help of sunlight, heat, or added chemicals. The trick, apparently, is to get something to self-heal while it's just sitting there. And for the first time, this has actually happened, with this oozing, gelatin-like material that jumps to fix itself without any intervention at all. The idea is that the material could ultimately be used in medicine, for NASA materials, or as a fun new kind of Jell-O, we're guessing. We also appreciate that it's named after the Terminator: "I'll be back..."

If watching TV is too difficult, then you can just attach Sony's newest gadget to your head.

As of Tuesday, you can pre-order Sony's new "wearable display," which in short is a headset that you attach to your eyes and that lets you watch TV as if you were at the movies. The gadget gives you the impression that you're watching a 750-inch screen from 65 feet away. It's big, inconvenient, and unwieldy — but so were cellphones in their first incarnation, and if this thing catches on it'll probably shrink to a more manageable size. It supports both 2-D and 3-D screens, and has a cushioned head pad. Retail price? $999. Being able to watch Game of Thrones movie theater-style while eating a bowl of cereal in your bathrobe? Potentially priceless.

The smoke alarm is getting a makeover.

We'll admit that revamping the smoke alarm is a more pressing concern than, say, digitizing the milk carton. Nest Labs has the answer: a new kind of smoke alarm that, praise be, recognizes when you stick out a hand and yell at the screeching alarm: "I'M JUST MAKING BACON." It connects to a Wi-Fi network, meaning that it doesn't need to have batteries, and comes equipped with a robotic voice that tells you what's going on: “Heads-up, there’s smoke in the bedroom,” it'll tell you, or “Emergency, there’s smoke.”

At $130, it's an expensive gadget — the average smoke alarm costs less than a quarter of that. And if you have a big house, you'll need to buy more than one. Still, can you put a price on never whacking that beeping noise with a broom again?

Robots can build themselves.

Who needs the bad rep of building a lethal robot... when you can just build one that assembles itself? Over at MIT, they've built just that. At present, they're just pretty colored boxes, but you know, the creepy things are always cute in the beginning.

Smartphones are getting real flexible.

Samsung and LG are going head-to-head to kick off this trend: on Monday, LG began mass-production of flexible panels for smartphones, ahead of their rumored "curved phone" launch next month. Samsung is hot on their heels, with their own plastic, bendy line of phones allegedly coming out in November. This is just the tip of the iceberg: analysts have been predicting for some time that the next generation of gadgets will have screens that bend in every direction, and will be "unbreakable" and encased in plastic. As we reported yesterday:

LG's smartphone panel uses OLED technology, which is the same kind of panel used in LG's curved televisions — which, at $13,000, no-one really bought, though they're hoping this time will be different. It's plastic rather than glass, and so won't shatter or get scratched easily, and can adhere to a variety of shapes and sizes. Critics have been predicting for a while that a new type of smartphone screen is in the works — a "rollable," even "transparent," model of "wearable technology," which is literally technology you can wear on your body, like smartwatches — but, until now, companies have rejected them because they're difficult to design and construct. OLED screens need to be kept away from air and moisture, so they have to be encapsulated by another material to work effectively.

According to The Verge, LG's new line will look like this.

Still, never let it be said that all new inventions are good for the world.