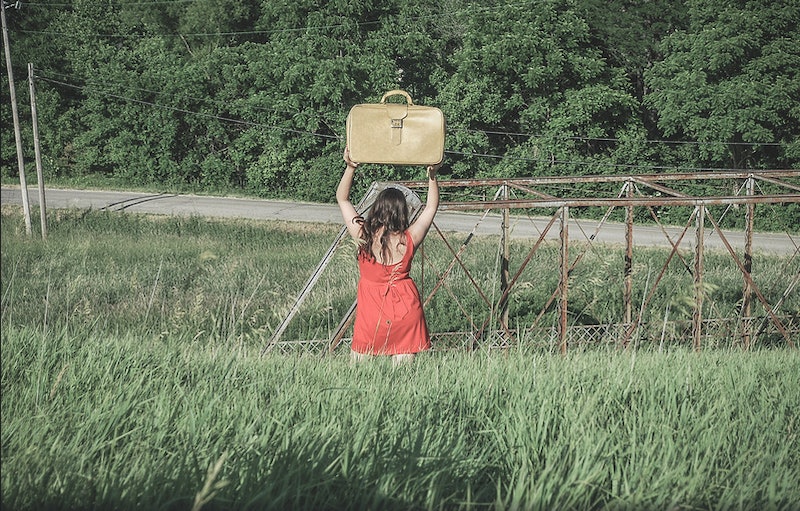 I am someone who breaks up with states more often than Taylor Swift used to break up her famous boyfriends, but every so often, your life will force you to take a look at your surroundings and just know that you are 600% done with where you are and what you're doing there. Sometimes it is as simple as changing your point of view, or maybe moving to a new apartment in the city you already live in. Different points in your life will necessitate change to come in different ways, to varying degrees—a radical upheaval of your entire existence isn't always necessary But just as often, it might be your gut telling you that you need to get yourself straight out of the state (or time zone or country or...) you are living in. Even if there's nothing wrong on the surface of your life where you currently are, you know yourself well enough to know when you are in the right place, and when it might be time to consider a major change.

Having lived in—*takes deep breath*—Tennessee, Washington, California, Virginia, and New York, I have, if nothing else, seen a large spectrum of how people, attitudes, and circumstances shift from state-to-state. Change is not as far out of reach as it can sometimes feel. If you are feeling out of place right now, there is undoubtedly somewhere you could be living where you wouldn't feel that way anymore. So how do you know if that feeling in the pit of your stomach is telling you to pack up and bail out? Luckily, there are a lot of signs:

You get major FOMO living where you live now

This is the very same circumstance that helped Taylor Swift lure Selena Gomez to New York: If all the cool things are happening somewhere else, quit moping around and being jealous—just go.

You went on a trip and were sad to leave

Someday in your life, you will have an experience where you visit a city and love it so much that it will feel weird going home. It's different (although confusingly, annoying related) from the feeling of just having loved a vacation and being bummed to return to real life. If it feels weirdly like you're leaving home, rather than heading back to it, listen to that feeling. If somewhere else seems more attractive than the nice warm bed and Netflix subscription waiting for you at home, that's nothing to ignore.

There are too many bad memories attached to where you live

Sometimes moving to another state isn't a matter of something pulling you toward the new place, but pushing you away from the old place. Maybe it was a particularly rough break-up, or a series of terrible job experiences, or a death. I'm not advocating adopting a habit of running from your problems, but if bad memories are genuinely affecting your ability to feel happy and healthy and functional where you live, moving to another state might be what you need to get that bad taste out of your mouth once and for all.

Even before you consciously understand it might be time for you to move, your unconscious self is starting to consider it by harassing all your long-distance friends, particularly the ones who live somewhere you might want to live.

You've stopped looking at new jobs on LinkedIn. You never open the e-mail blasts telling you what's going on in your neighborhood. You've even stopped swiping right. If you find yourself oddly reluctant to plant your roots any deeper than you already have, it might be because you are looking to make a getaway, even if you haven't come to terms with it yet.

You have talked about moving before

Nobody likes the person who cried "move." I know this because I am that person. Half the time when I say I'm moving, I put it off a kazillion months and then lurk off randomly because I'm embarrassed it took so long. It's...awkward. The important takeaway here is this: If you're talking about moving, it's going to happen. You might think it's a matter of "if," but at the point when you talk about it all the time, it's really a matter of "when."

You have major road rage where you live now

OK, I know—you can get road rage anywhere, anytime. But one of the number one symptoms of not being able to even with a place is getting disproportionately worked up on your drive. Sure, traffic sucks no matter what, and it's not like you're going to LOVE gridlock somewhere else, but let's have an honest moment right now: All that yelling and fist-shaking? Is it REALLY about the traffic jam, or are you just kinda done with this whole city right now?

Your career goals would be better served elsewhere

No matter what industry you're working in, there is likely at least one city that is the figurative Mecca of that field. For my sister and her fellow tech nerds, it's Seattle and San Francisco; for my actor friends it's Los Angeles; for me, it happens to be New York. You don't necessarily have to move to reach peak success in your career, but it certainly helps, and it'll be a relief to live near people who actually know what you're talking about for once.

You want to be closer to your family

It doesn't matter how old you are or how long it's been—if you feel like you want to move and be closer to the humans you love, there's no shame in that.

Or, alternatively, you want to move further away from your family

Not everybody gets merrily along with the 'rents and sibs. If you've got the guts to strike it out on your own, more power to you. Even if you do get along with your family, sometimes it's nice to get a break and get a sense for who you are on your own.

This is a biggie: some areas, for instance, are such a mix of progressive and traditionally-minded people that you really never know which you're talking to until you've accidentally offended someone. My experience in Nashville was very much this way. There is a huge divide in the city on important social issues, and sometimes the intolerant half is louder than the tolerant one. And although I'm all for sticking around and fighting the good fight where it most needs fighting, it can be too upsetting to live in a place where people have drastically different views than you, or where you're surrounded by mindsets and moral codes that feel unshakably problematic to you. Just because someone is entitled to their opinion doesn't mean you have to stick around and hear it.

I am the whiniest person ever when it comes to the weather, so I'm the last one to judge people for moving somewhere where the sun shines or somewhere it doesn't. The weather can have major effects on your health and psychological well-being. It may seem drastic to move because you're chilly every now and then, but once you consider how it will weigh on you over time and it doesn't seem so crazy anymore.

You just need a change

Human beings are actually alive for a really freaking long time, compared to other animals. And who wants to spend it all experiencing the same things in the same town over and over until they're dead? There are so many things to experience and eat and talk about that are beyond where you're living now, and if you want to be a part of it, there's no better time to go than right now.

More like this
3 Zodiac Signs Most Likely To Be The Center Of Attention
By Nina Kahn
Craving The Beach? Here's Your Guide To A Solo Vacation In Turks & Caicos
By Alexis Morillo
The 19 Best Tweets & Memes About Bisexual Awareness Week
By Lexi Inks
These 4 Signs Are The Sarcastic Jokesters Of The Zodiac
By Brittany Beringer
Get Even More From Bustle — Sign Up For The Newsletter