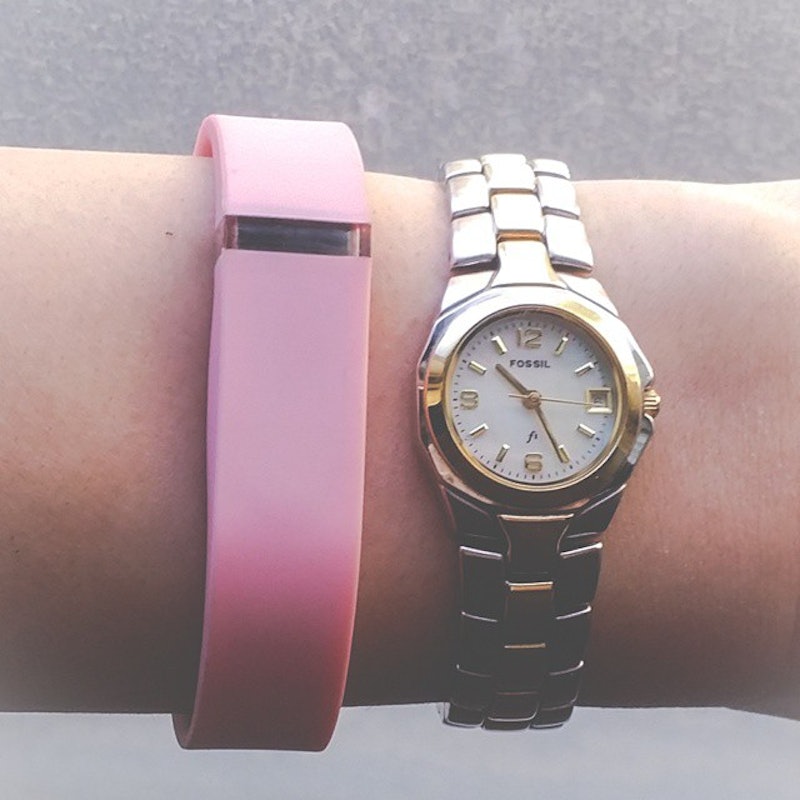 Nobody comforted me when the news came out that it was the last season of Parks and Recreation. Nobody glee-shrieked beside me when Bradley Cooper kissed Betty White on live television. Nobody bought me absurdly overpriced chocolates on Valentine's Day. Yes, you guessed it: I'm single. But just because I'm single doesn't that doesn't mean I am alone. Do you know who has been there for me through all of these trials and so many more? Fitbit. Fitbit, it turns out, is the significant other/spouse/life partner that I never had. When there was only one set of footprints? It was then that Fitbit carried me.

I know it might seem dangerous to use a Fitbit as an emotional crutch, but this is, at least, a notch above becoming Fitbit's slave. Someday I may find an actual human to share my life with, but until that day comes, I'll just be stepping here, illegally married to a device that occasionally blinks a few lights at me (It cares! It really, really cares!). Even if you have a real, breathing, sentient partner of your own, you eventually come to grips that you are in an open marriage with Fitbit, because the relationship you have with it transcends the relationship you have even with your laptop or your phone. Here are all the ways your Fitbit is basically your spouse:

You talk to it more than anybody else in your life

I live in constant fear of being institutionalized for saying things like "Really? Really?" to my Fitbit every ten steps, as if I were walking next to an actual companion.

You feel bad for yelling at it

It's an irrational, emotional guilt I can't even explain. Fitbit cannot hear me and yet I feel as if it has absorbed every word.

It's the first thing you see in the morning

And the last thing you see before you fall asleep

*Yawns*. See you in the morning, Fitbit.

You "tap" that on the reg

GET IT? Because you tap the Fitbit wrist band and tap is also a synonym for sex and LAUGH AT MY PUN EVEN THOUGH I AM THE WORST.

You feel gratified when it smiles at you

Honestly, I would move mountains to see that little icon beaming at me after 10,000 steps.

It has so much power over your mood

Oh, the alternating triumph and woe I have felt for Fitbit! It is more splendorous than any romantic gesture, more torturous than your worst heartbreak. My relationship with my Fitbit is how I imagine the tortured, passionate, co-dependent relationship between Justin Bieber and Selena Gomez.

It is emotionally supportive

Fitbit is always reminding you that it believes in you. We all deserve that kind of significant other in our lives.

Your reunions are always sweet

They say that absence makes the heart grow fonder, and nobody understands that quite like a Fitbit owner.

You don't want to let it down

Because it has that unshakable faith in you that a partner would have, you feel extra bad when you fail it.

Can you think of anything more unforgivable than someone using your Fitbit and putting steps on it that don't even belong to you?! The same way you you want to keep any people with wandering eyes away from your spouse, you want Fitbit all to yourself.

Even when you change its outside appearance, it stays the same on the inside

Your spouse will grow old and fundamentally still be the same person, as will Fitbit, with its many generations and alternate skins. At the end of the day, even with all its new bells and whistles, it's still just Fitbit. Your Fitbit. The one it was when this all began.

You can't help talking to your friends about it

Actually you probably talk about it more than you'd talk about your spouse. Whoops.

You fear losing it more than anything

Honesty hour: My Fitbit fell off in a crosswalk and I went bolting back for it so fast that I almost walked in front of a moving vehicle, and I'd do the same for someone I love. (Probably.)

You would go just about any distance for it

♫ Cuz I know I'd walk a thousand miles if I could just see you (and also rack up a bunch of Fitbit steps and be smug about it) .... toniiiiiight. ♪