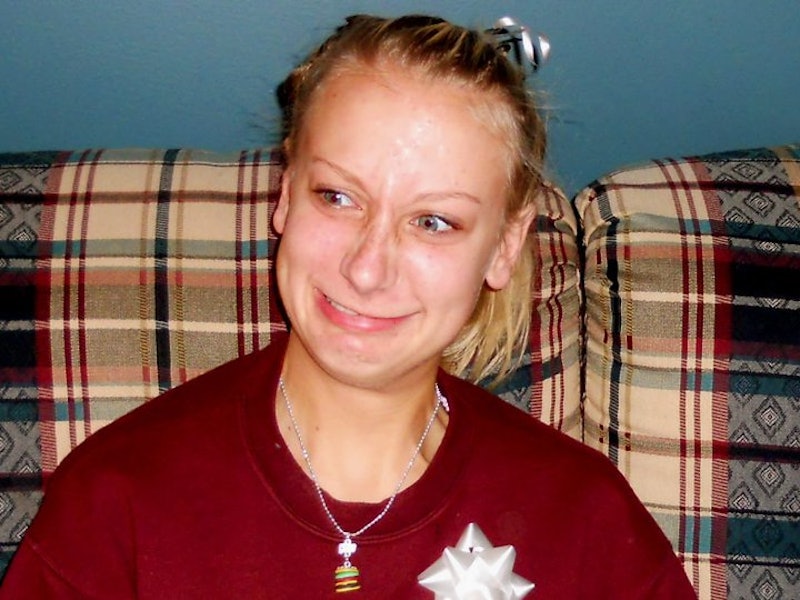 In my friend group, I'm the girl that if anything bad is going to happen from a certain situation, it's going to happen to me. My history in weird, coincidental beauty and general life accidents has given me a rite of passage to just about any conversation ever. Looking for someone who has broken her entire foot by stubbing it on a door frame? Me. Ever met someone who went to a job interview, then got an email to "check your fly" before coming in for my first day of work? Me. Ever had to wear a headgear to school? I have.

Don't get me wrong, I wouldn't trade my weird, blunder-filled life for anything. I have more stories for my grandkids than I can even count. Plus, I'm pretty sure my beauty blunders make me basically an expert to write about the topic. But there are a few beauty-related accidents that I thought I would literally never recover from. And a few my friends will not let me forget. Ever.

I know I am not the only one to make beauty mistakes, permanent or temporary. They can feel life-ruining. They make you self-conscious to the point of staying inside. Somehow, though, I have managed to live after each of these accidents. We all do it, and we all have pictures to prove that they happened. It doesn't mean you should stay inside or not tell your friends. If you have confidence with your mistake, people might just think it's cool (remember Regina George's cut-out tee?). Have a beauty blunder of your own? Tweet at me! I would love to hear about it/know it's not just me who's tabooed!

I was 12 years old when I heard six words no middle school girl wants to hear from her orthodontist, "You have to get a headgear." I thought I was going to cry. But, it turns out, it was going to be OK. I only had to wear it at night, where no one would see me.

It was actually the worst day of my life. This was before middle schoolers were allowed to have cell phones, so thankfully there's not a lot of proof. But my friends definitely still remember that awful day. And now I can laugh about it with them.

That's me. The blonde in the middle. I was born with probably the thinnest hair you could ever feel. It's a blessing and a burden all in one. When I was younger, my mother thought it would be a great idea to perm my hair to make it appear thicker. I was too young to know any differently and was always excited about a new hairstyle, so I was on board.

Mistake. Big mistake. But the logic made sense to me. I tried to perm my hair hair three times in my life. When I was 8 years old, then when I was 10, and because that still wasn't enough proof and I needed a hair makeover, I tried it again when I was 16 years old. I hate it so much that I showered three times that day to wash it out.

Since then, I have vowed to myself to never, ever perm my hair again.

3. Using Products You're Allergic To

Unfortunately, you usually find this out the hard way. Before I was old enough to wear makeup, my sister and her friend gave my best friend and me a makeover. When they were done and it was time to go to bed, they offered to take off our makeup for us using their makeup remover.

My eye swelled up to the size of a golfball. It didn't hurt and I wasn't watching her take it off, so I had no idea. When my sister took me to my mom, however, the gasps from her and my dad were enough. After trying out organic makeup removers and very expensive removers, I've had to accept that makeup remover products just aren't for me.

4. Shaving Off Half Your Eyebrow

This was a major and horrible accident. I played on my high school soccer team, and we were so small that the girls (three of us, total) had to play on the boys team. I loved it, but my high school self was convinced I had to have clean shaven legs before every practice so as not to terrify the guys.

One day, I was shaving my legs before practice and reached up to scratch an itch on my eyebrow. Unfortunately, I still had my razor in my hand and it slipped just right to shave off half of my right eyebrow. I didn't tell anyone until — but people obviously noticed.

Luckily, my blonde brows sort of blend into my pale skin. Between that and switching the side of my part so my bangs would cover up the missing eyebrow, I managed to grow it back without much humiliation.

When I was younger, my sister used to always mock me by saying I was going to be that girl waring lipstick + lip liner + eyeshadow + '80s blush. Well, joke's on her. My eyelids get dry to the point of not being able to open if I wear eyeshadow for three days in a row.

Also, my eyes aren't squinting from the flash in that picture. I literally could not open them any wider. I guess they're too week?

6. Not Doing A Patch Test

Thanksgiving is my favorite holiday because my family reunites in Illinois to spend it with some extended family. My cousin, sister and I are all around the same age and we always have a blast acting like middle school girls again.

A couple of years ago, we were out doing some last minute Thanksgiving food shopping and happened upon Nair. You know, the stuff that magically melts your hair off.

Turns out, that warning on the back of the label to do a patch test is NO JOKE. My sensitive skin couldn't handle it, and I started bleeding out my pores. Never again.

7. Leaving Your Fly Down

I had the exciting opportunity to become the editor-in-chief of my college magazine when I was just a junior in college, but the interview process was actually grueling. On top of creating a CD (old school, right?) with clips of multimedia projects and clips, each candidate had to interview in a room with the current editor-in-chief, the dean of the journalism program and other top professors. It was intimidating.

The same day, I was offered the position in an email from the current editor-in-chief. Thankfully we were friends, so it wasn't that awkward when, at the end of the email, she left the message "P.S. Be sure to check your fly before you go into the office next time ;)"

I deleted the email as soon as I got it. She saved the email to humiliate me for the rest of my life.

8. Piercing Your Ears At Home

I'm sorry. This is gross.

So, I do this thing that when I get bored, I pierce my ear. Because of sports in high school, I had to take my ear piercings out for every game. If you have any cartilage piercings, you understand the struggle of having them close up in a two hour time period. It's the worst. In the span of my life, I've had to pierce my helix (on both ears) twice, gotten my ears double pierced and pierced my tragus. Again, I went to small school, so I was infamous for this kind of boredom.

My freshman year of college, I was Skyping my friend and I told him that I was getting bored again. But, like a true college student, I didn't want to pay for someone to pierce my ear orbital. He double-dog dared me, repeatedly, to just do it myself.

After getting taunted enough, I decided to try it. And I loved it. Until I noticed that there was a bump growing on the back of my earring. When I took it out, I realized that I had pushed my cartilage out enough to create a permanent bump on the back of my ear. So that's why it's important to let someone else, who has more experience, pierce your ear.

Thankfully, it's not where many people look, but I try to let my hair cover it as much as possible.

More like this
15 Must-Have September Beauty Launches, According To Our Editors
By Rachel Lapidos
This Week’s New Makeup Releases & More Beauty Headlines
By Audrey Noble
Jecca Blac’s New Brow Drop Was Inspired By Your Fave Drag Queens
By Justine Knight
12 Bellissima Beauty Moments From Milan Fashion Week S/S 2023
By Olivia Rose Ferreiro
Get Even More From Bustle — Sign Up For The Newsletter