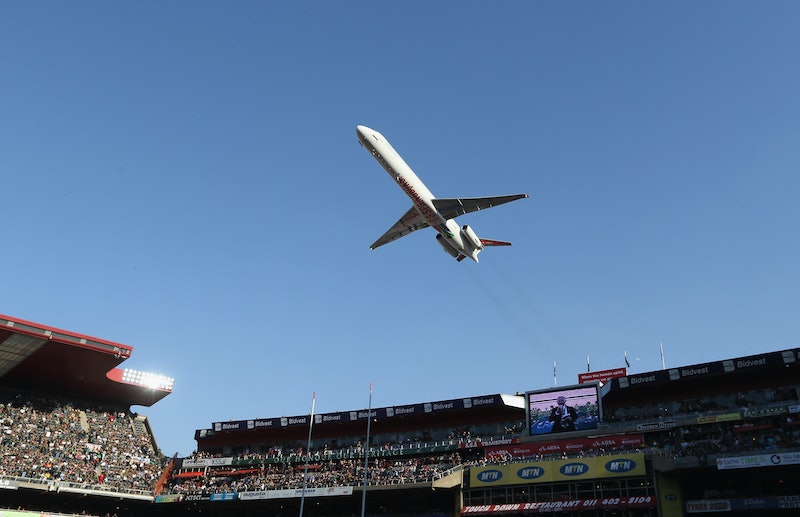 The nine-year-old stowaway who hopped a plane to Las Vegas last week really didn't need another violation on his record, it turns out. He apparently has a history of rule-breaking behavior, and has been brought to the attention of child protective services several times. The Star Tribune obtained an e-mail Tuesday which indicates that since Dec. 2012, the boy has been subject to four child-protection assessments. Though the assessments found no injuries on the boy, they noted "a pattern of behavior."

A few weeks ago, the boy — who has not been identified, and is too young to face charges — was arrested for stealing a car. Before that, he'd had a history of sneaking into water parks by waiting for a large family to arrive and sneaking in among the kids.

The e-mail, written by Janine Moore, an area director of the county’s Human Services and Public Health Department, also said that the boy has a history of lying, alternately claiming that his mother threatened to kill him or that she was dead. "Typically, staff can tell if a child is lying, but with this child, they are unsure what is going on," Moore wrote.

When he arrived in Vegas, the boy was placed in foster care and apparently turned violent. He was hospitalized and eventually calmed down.

It's unclear what will happen to the boy, but it seems unlikely that he'll slip through the cracks over at child protective services again, now that he boarded a plane without anyone noticing rather than just, oh, stealing a car.

Of course, sneaking aboard a plane isn't all that different from blending in at a water park, unless you look Middle Eastern. Jeffrey Goldberg of the Atlantic had already told us that airline security is a sham: he circumvented an airport's security system using documents made by a Sony laptop and an HP LaserJet printer "in order to prove that the Transportation Security Administration, which is meant to protect American aviation from al-Qaeda, represents an egregious waste of tax dollars, dollars that could otherwise be used to catch terrorists before they arrive at the Minneapolis–St. Paul International Airport, by which time it is, generally speaking, too late." (Ironically, the experiment happened at the same airport from which the nine-year-old stowaway's plane departed.) If a grown man can get away with what Goldberg did, it's no wonder a child, especially a cunning child, was able to get on a plane unnoticed. The biggest question there is why he chose Vegas — casinos must have tighter security than that airport.

You should read the whole piece to see how easy it would be for a nine-year-old to sneak aboard a plane, but here's an excerpt:

In Minneapolis, I littered my carry-on with many of my prohibited items, and also an OSAMA BIN LADEN, HERO OF ISLAM T-shirt, which often gets a rise out of people who see it. This day, however, would feature a different sort of experiment, designed to prove not only that the TSA often cannot find anything on you or in your carry-on, but that it has no actual idea who you are, despite the government’s effort to build a comprehensive “no-fly” list. A no-fly list would be a good idea if it worked; Bruce Schnei­er’s homemade boarding passes were about to prove that it doesn’t.

The ID triangle: before a passenger boards a commercial flight, he interacts with his airline or the government three times—when he purchases his ticket; when he passes through airport security; and finally at the gate, when he presents his boarding pass to an airline agent. It is at the first point of contact, when the ticket is purchased, that a passenger’s name is checked against the government’s no-fly list. It is not checked again, and for this reason, Schnei­er argued, the process is merely another form of security theater.