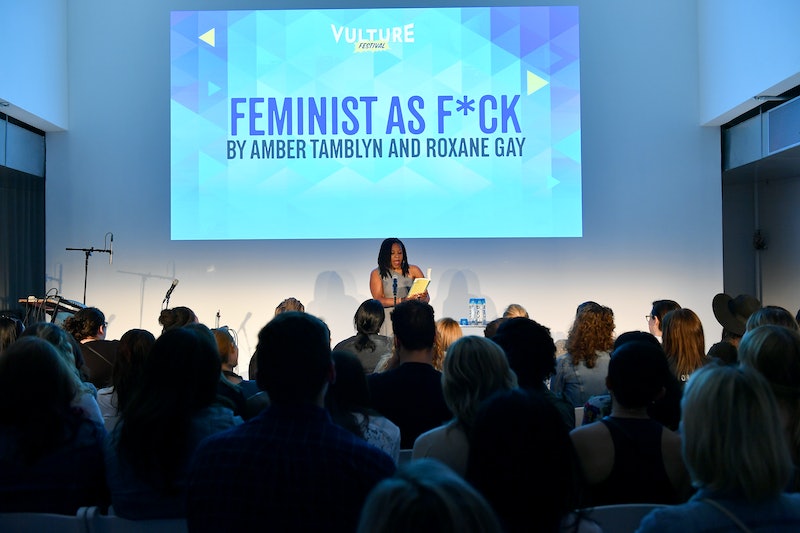 Last month, a story was published entitled, Study: Everybody Hates Environmentalists and Feminists. The article cites studies that found “feminist goals [are] hampered by a dislike of feminists,” “participants held strongly negative stereotypes about such activists” and “the most frequently mentioned traits describing 'typical feminists' included 'man-hating' and 'unhygienic.'" It ends by suggesting that environmentalists and feminists should tone down their aggressive/stereotypical behaviors in order to get their message across.

Even though I am a feminist and sympathetic to environmentalists' plight, I understood the author’s point. I don’t like it, but I get it. Ever since Joanna Coles became editor of Cosmopolitan, the magazine has been including semi-feminist content, with articles such as “Why do summer movies SUCK for women?” and “Will your guy change his married name?” Cosmopolitan’s feminism isn’t aggressive or threatening (some will argue that it’s non-existent), but it reaches about 3 million girls a month. Other feminist magazines, such as Bitch and Bust, filled to the brim with controversial feminist content, have a combined circulation of around 140,000 readers per month. Whose message is getting across?

I still don’t agree with the author. In fact, I think his article is absolutely detrimental to the feminist cause, because he is intensifying the negative attention that activism gets and doesn’t deserve. Feminism had provided amazing advancements across the world and for every person reading this article-so why is it uncool? Where does this supposed hatred come from? A lovely article on xoJane further discusses this bizarre aversion:

The thing is, when you devote yourself to something like activism, you're opening yourself up to a lot of emotional vulnerability for the sake of working against a power structure. That's a pretty brave thing to do, and I don't think people (myself included) like to be reminded of the fact that they themselves aren't being very brave.

So they write it off as "annoying" instead, because it's easier to face than the fact that someone is making them look like a coward. I know I've done this, especially as an adolescent: when confronted with someone bent on reminding me of an uncomfortable truth, I've disregarded them as "too intense" rather than accept that discomfort and try to learn from it.

I love the way that the author, Kate Conway, makes an audience’s aversion to activism their problem. Because people don’t want to deal with social issues, feminism is deemed uncool. It’s not that we have to rebrand feminism, it’s that young women need to get with the program. One of my favorite professors said that feminism wasn’t just for women; it was for people who want to see a better world. And if that is uncool, then I don’t want to be cool.

In the words of Amber Tamblyn, “women identifying as feminist is so important. And if you’re young, and you hate that word, keep that shit to yourself. Because you look f**king dumb.” Aggressive? Yep. But is she right? Hell yes.

More like this
Women Around The World Are Cutting Their Hair In Solidarity With Mahsa Amini
By Darshita Goyal
At 28, Melanie C Was Falling In Love & Reclaiming Her Confidence
By Olivia-Anne Cleary
Self Esteem's “F*cking Wizardry” Is An Anthem About Knowing Your Worth
By El Hunt
Isa Guha Is Taking The Lead
By Charlie Mock
Get Even More From Bustle — Sign Up For The Newsletter