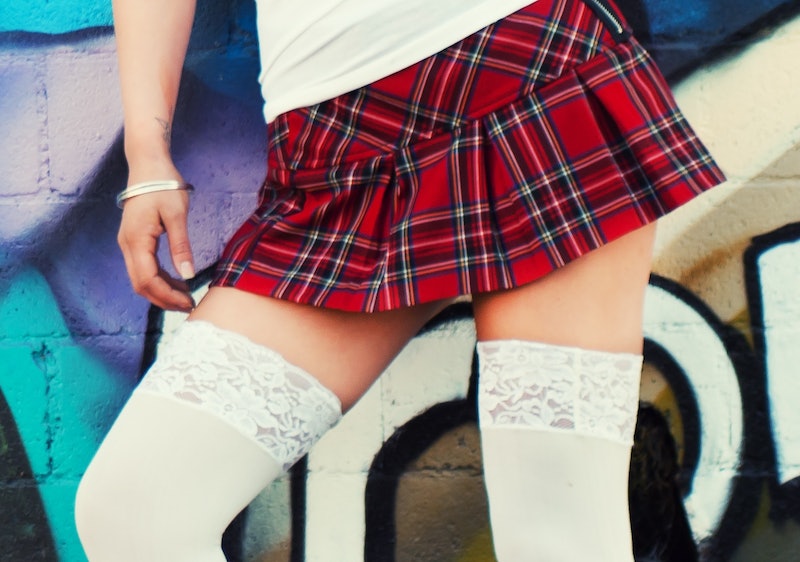 I was a Catholic schoolgirl, and it was the opposite of Britney Spears in the "Baby One More Time" music video. Instead of shimmying around in a plaid miniskirt with a tight white button-down, knotted up to show off a tanned belly, I wore a loose red polo shirt and totally unsexy khaki pants. It was not titillating in the slightest, which is unsurprising because Catholic schools don't actually want students to look like strippers. (To be clear, there's nothing wrong with looking like a stripper, or being a stripper, but I assure you that most school administrators do not agree.)

For a while, I loved joking about the uniform. After graduating I went through a phase where I told people on first dates, raising my eyebrows and affecting a facial expression that I hoped was charmingly wicked. "Oh yes, I used to be a Catholic schoolgirl," I would purr. And then I retracted the flirtatious statement without killing the mental image: "No, not the sexy kind. It wasn't what you're imagining."

I felt like I had a secret power, because my date was obviously still imagining what he originally imagined. I mean, if you're going to restaurants with men who have grownup jobs when you're 19, living with your parents and flunking a community college English course — which I was — then you've got to manufacture the upper hand. (Full disclosure: I still live with my parents.)

How 'bout the pigtail braids and pastel pink pompom scrunchies, huh? I can't believe that song came out in 1999. One for the history books.

I don't mention it in conversation anymore, but I still aspire to Spears' bewitching tenth-grade-going-on-Tinder-hookup ensemble. Sofie Mikhaylova wrote, "My Catholic high school didn't have kilts as part of our uniforms, but I wish it did. The 'bad schoolgirl' aesthetic is all I've ever wanted, and it still pulls at my heartstrings now, whenever I spot a perfectly pleated and plaid skirt." I concur! And I feel cheated because I had to wear a uniform but didn't get to preen naughtily in front of the mirror.

A commenter on Mikhaylova's article wrote:

"I just think schoolgirl uniforms are cute. I always have. To me, it probably has more to do with my debilitating preadolescent Sailor Moon obsession than 'aww YEAH now men will think I look like a sexy 13-year-old.' I just have always liked the school uniform look, probably because of how neat, clean-cut, and timeless the style is. There's a woman at my job who is probably in her 40s, is a really sharp, quirky dresser, and often wears what looks like it could have been a school uniform. And she rocks it. She looks totally cool."

My actual uniform wasn't cute, but it wasn't terrible. Like a lot of people who wore school uniforms, I learned to appreciate the freedom of throwing on the same clothes every morning. It might seem like the opposite of freedom, being told what to wear, but choices can take up more energy than they're worth, especially during the hyper-self-conscious teen years. (Actually, I had three colors of polo shirts and navy blue pants in addition to the khaki ones, so there was a tiny bit of variety.) You don't have to think about your outfit, and you're comforted by the realization that everyone else at school will look equally boring. As Mikhaylova quipped, "I could wear the same exact shirt for five days in a row, and nobody could tell the difference."

Since the weekdays were sartorially monotonous, dressing up on the weekend was more significant. My friends and I used to carefully construct ensembles for basketball games, dances, or trips to the movies. I could spend an hour deciding what to wear on an outing, especially if a crush was involved. How I dressed to hang out with my friends was different from how I dressed when I was going to see a boy.

I started dating significantly older guys during my sophomore year. When I was 17, a junior, my boyfriend was 24. Mom and Dad didn't openly hate him but the situation was certainly tense. I had what we can politely call "issues." Being a Catholic schoolgirl didn't make me want to play into the saucy "jailbait" Catholic schoolgirl trope — I would have exploited that role regardless. It just added an extra level of delicious cliché.

As a girl, as a blonde girl, as a vocally sexual girl, I was pigeonholed by my classmates. It was weird for them, though, because I was also smart and argumentative. Not every part of me fit into the "slut stereotype." My religion teachers alternated between being grateful that I started conversations and being frustrated because I was at the Richard Dawkins level of atheistic emotional maturity.

What I'm trying to say is that once a stereotype is imposed on me, I become perversely attached to it. Survival strategies for girls growing up in a misogynistic world vary; mine was to manipulate male attention using the parts of me that everyone else emphasized. As I said in the beginning, the facts of Catholic schoolgirl-dom were utterly mundane. But the cultural myth of the Catholic schoolgirl was irresistible.

More like this
Phoebe Dynevor Serves ‘Bridgerton’ Underboob In Stunning Floral Gown
By El Hunt
24 History-Making Black Women You Probably Didn't Learn About In School
By Ayana Lage and JR Thorpe
25 Inspiring Quotes From Black Women To Celebrate Black History Month
By Kyli Rodriguez-Cayro and JR Thorpe
J.Lo's Micro-French Manicure Has A Fun, Sparkly Twist
By Olivia Rose Rushing
Get Even More From Bustle — Sign Up For The Newsletter
From hair trends to relationship advice, our daily newsletter has everything you need to sound like a person who’s on TikTok, even if you aren’t.