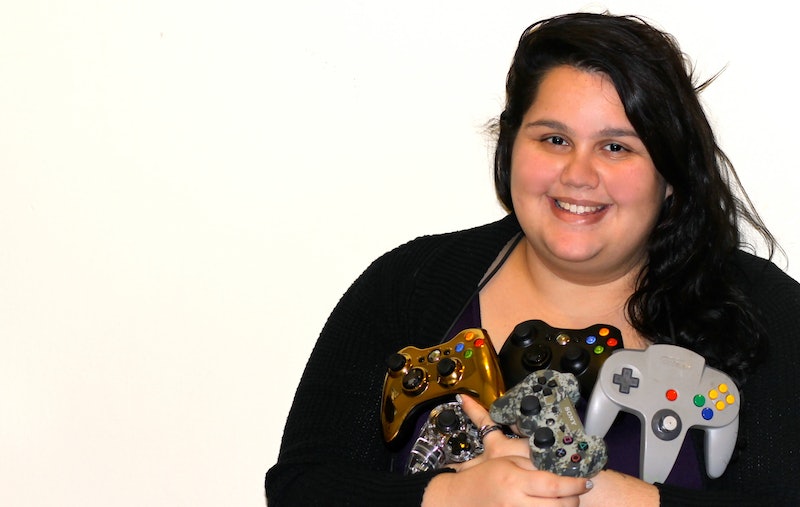 The first controller I ever held in my hand was that of the N64. It was 1997, I was 6 years old, and my parents had gave me my very first console for Christmas along with two games, Yoshi Story and Mario Kart. They knew I’d have fun with it, but they didn’t know it would be something I would cherish for over a decade to come.

Video games have been with me through everything. As an only child with parents who worked long hours, the bright, cheery cartoon characters I controlled with my thumbs got me through many a lonely summer. I had a seemingly unlimited world at my fingertips. I could race cars on the turnpike, save the princess, and learn about world history all in the matter of an afternoon. Every time I got close to getting bored, a new game or console would come out and make me fall in love all over again. I was a gamer girl, and I loved every single minute of it.

That little gamer girl turned into a gamer woman, and I am still holding a controller. It’s not usually the N64 one anymore; I moved on to the PS2 and Game Boy Advanced, then the GameCube, and finally the XBOX 360. But it’s there, and I’m still saving princesses in between running off to my full-time editorial job, writing on the side, walking my dog, working on my novel, and all the other things I’ve found to bring me joy.

And I’m not the only one. A staggering 52 percent of gamers are women, many of whom, like me, started as little girls and held onto it throughout adolescence and young adulthood. We've kicked our friends' asses in Halo and Mario Party; gotten lost in the incredible, immersive worlds of Skyrim and Legend of Zelda; and we've even teared up a little during emotionally intense games like Heavy Rain and Final Fantasy VII.

When women do show up in games, they're often depicted in sexually suggestive situations, and frequently serve as a romantic or sexual interest to a more prominent, male character. They’ve oversexualized us, demeaned us, and continue to do so for the entertainment of their only prioritized clientele: men.

I've been blatantly and rudely butted out of conversations about video games amongst fellow gamers, at conventions, in college, at my own house. I've been asked by video game store employees if I "understand" what I'm buying, or told how cute it is that I'm buying my boyfriend a game more times than I can count. I've been interrogated by male gamers to make sure I'm "legit," while hanging out with friends — and then promptly been hit on, too.

And forget even trying to step foot into the online gaming community — after having a handful of guys creepily follow me around in Ragnarok Online a few years back, you won't be seeing me in an MMORPG (mass multiplayer online role-playing game) again. Because there's nothing like being actively followed by a swarm of faceless male gamers, being pelted with messages demanding me to show them my breasts or asking if I have a boyfriend for hours until I have to log off because the game just isn't fun anymore.

It's made me feel gross and unsafe amongst people who should, for all intents and purposes, be my friends — or, at least, my fellow party members on an orc-slaying mission.

Gamergate — the predominately male-led harassment campaign against female game developers and critics — has broken the hearts of female gamers and developers everywhere, showing us that a horrifyingly large and vocal portion of people who also enjoy video games don’t want us anywhere near them. They don’t want us playing them, making them, or writing about them, and they’re willing to resort to any level of intimidation necessary to make sure we stay out of their territory.

Women have been pushed out of the clubhouse, which now bears a sign that reads: “Boyz only.” We’re not wanted, we’re not welcome, and if we try to make a place for ourselves, we have everything to lose: our careers, our relationships, our homes, our money, and our own safety.

Just ask the brave women (Brianna Wu, Anita Sarkeesian, and Zoe Quinn — just to name a few) who have attempted to break down the clubhouse door or create a new space for women have been treated with a villainous, inhumane cruelty. They’ve been harassed, slandered, doxxed, and threatened with physical and sexual assault.

They have been forced out of their homes. They have been silenced by a group of radicalized, misinformed misogynists who lurk in the shadows of the Internet looking for the next opportunity for an easy target under the guise of advocating for “ethics in game journalism.” They are willing to do any and everything to knock the controllers out of our hands, to send the next generation of gamer girls back to their dollhouses cowering in fear.

I’ll admit it: it’s tempting to let them intimidate us. It’s tempting to be afraid; to decide “nothing” is worth risking the kind of hell these people can turn your life into — certainly not video games.

But we can’t — I can’t. I can’t do it, and I won’t. I love video games, and I want them to be part of my writing career. I’m going to express my opinions, and I’m going to have them be heard. I’m going to keep talking, playing, and writing — even if it scares people or threatens their collective fractured masculinity. I stand with Anita Sarkeesian, Zoe Quinn, Brianna Wu and all the other brave, wonderful women who have worked to pave a road for women in gaming. I won't put my controller down, or my keyboard away.

Every day, I am taking steps to stand up for women in gaming. They are small steps, but they give me the courage to take even bigger ones each time. I do not allow myself, or any of my fellow gamer girls to get cut off in conversations about gaming. If a game is sexist, I speak about it, regardless of who it might annoy or offend. I do my best to support games created by or featuring women. I tweet, Facebook, and tumble about games I like and games I don't. I don't allow myself to be afraid of what the world will think of me for taking up space in the gaming community.

It's taken me a long while to build up the courage to write about games. But here I am, and I'm not planning on going anywhere.

Video games are for everyone. They’re for me, they’re for you, they’re for our little sisters, and our daughters to create, to play, and to critique. We cannot allow cruel, sadistic people to take our joy away from us. We need to stand up to Gamergate and keep being ourselves. But it starts with you and me.

It starts with us refusing to shut up.

More like this
24 Funny Valentine’s Day Captions To Use No Matter Your Relationship Status
By Jessica Booth
11 Super Bowl Instagram Captions To Use On Game Day — Even If You Don’t Like Sports
By Alexis Morillo
Flip Phones Are Gen Z's Favorite New Nightlife Accessory
By Maria Santa Poggi
These Are The Fastest Electric Kettles You Can Buy
By Margeaux Baulch Klein
Get Even More From Bustle — Sign Up For The Newsletter
From hair trends to relationship advice, our daily newsletter has everything you need to sound like a person who’s on TikTok, even if you aren’t.