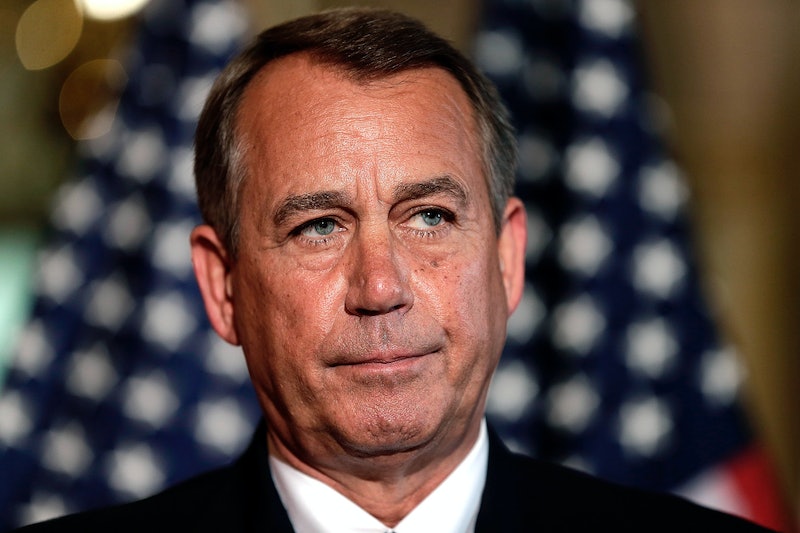 At the outset of day nine of the shutdown of the federal government, there's still no clear indication of how it, or the impending debt ceiling crisis, will be resolved.

President Barack Obama said at a press conference on Tuesday that he is willing to negotiate with Republicans, as long as they stop holding the debt ceiling hostage. "You don't get a chance to call your bank and say, 'I'm not going to pay my mortgage this month unless you throw in a new car and an Xbox,'" he said, indicating openness to the idea of "stopgap" bills to temporarily reactivate the government.

"I'm not going to [continue talks] until the more extreme parts of the Republican Party stop forcing John Boehner to issue threats about our economy," Obama said. "We can't make extortion routine as part of our democracy. Democracy doesn't function this way."

By now, it's a widely-held belief that Speaker of the House John Boehner has lost control of his party. He is widely considered a rational negotiator and decision-maker, but Obama's statement alludes to the far-right fringe of the Republican Party that is unwilling to negotiate or follow Party lines. They come from districts that seem to be going in the opposite direction from the rest of the country.

Boehner, on the other hand, rejected a stopgap approach to solving the crisis. "What the president said today was, if there is unconditional surrender by Republicans, he'll sit down and talk to us," he said. "That's not the way our government works."

As we reported yesterday, Obama said that talking with Republicans is frequently "a negotiation in theory, but in fact, basically, Democrats give a lot of concessions to Republicans, Republicans don’t give anything, and that’s dubbed as compromise."

The real-world consequences continue to mount. The family members of four soldiers killed in Afghanistan last weekend will have to pay their own way to Delaware if they want to meet the plane carrying their bodies, because "the Department of Defense does not currently have the authority to pay death gratuities and other key benefits for the survivors of service members killed in action," according to a spokesman.

News of this was — rightfully — met with outrage on both sides of Congress, and is apparently the only thing everyone can agree on. Senate Majority Leader Harry Reid said that "there are no words" for the situation, while Boehner said it was "disgraceful" and promised to pass a bill specifically remedying this on Wednesday.

While the House is trying to pass piecemeal legislation to remedy some of the most abhorrent parts of the shutdown, however, the Senate is expected to pass a "clean" bill to raise the debt ceiling through Dec. 2014 on Wednesday. It's unclear whether such a bill would gain enough support to pass in the House, where the sole sign of progress is news that they have decided to set up a working group to negotiate.