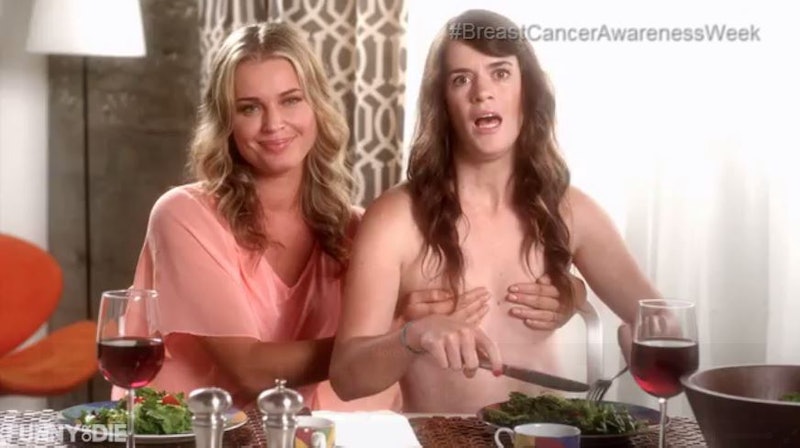 What do Rebecca Romijn, the NYPD and Spanish abortion laws have to do with one another? They're all in the news today because of their connection to topless women. As I was scrolling through my Google News feed this morning, I wondered if I'd accidentally created an alert for the word "topless" (I do this more often than one would think). But, nope, it's apparently just a really big day for exposed breasts.

The cops allegedly told her to "stop mouthing off," cuffed her and took her down to the local stationhouse where she was held for five hours and issued a summons (later dismissed) for "obstruction of a sitting area." Krigsman filed a lawsuit Monday at the Brooklyn Supreme Court. I can't help but think this whole thing could have been avoided if she'd instead gone to McCarren Park in Williamsburg, where they'll pretty much look at you funny if you're not a topless fire-eater ... But good for Krigsman for standing up for her right to bare chest.

Meanwhile, in Canada, another 24-year-old woman is topless. Her name is Nina Dobrev and I think we're supposed to both know who Dobrev is and care about her feelings on Obamacare. I can help you out with the first one: She stars in the TV show The Vampire Diaries. She recently posted a picture of herself topless, obscuring her breasts with a sign that says #GetCovered.

"Im Canadian. We have healthcare for all," she captioned it, followed by a link to info about the Affordable Care Act. "Because w/o it, youre naked." No, you're naked, Nina. I am sitting her right now both uninsured and fully-clothed.

Continuing this terrible trend of women taking off their tops for social causes (does anyone see any men doing this?), the terrible pseudo-feminist group Femen got all naked-like to protest Spanish abortion laws on Wednesday morning. The proposed laws are also terrible, and would make getting an abortion illegal except under certain conditions concerning health and safety. Somehow, though, I don't think three women stripping down in the middle of the Spanish Parliament and shouting "abortion is sacred" is going to make Spanish lawmakers change their minds.

But let's end this compendium of topless lady news on a lighter note: A breast cancer awareness video that Rebecca Romijn did for Funny or Die. When your hands are your bra, you never have to worry about finding the right size.