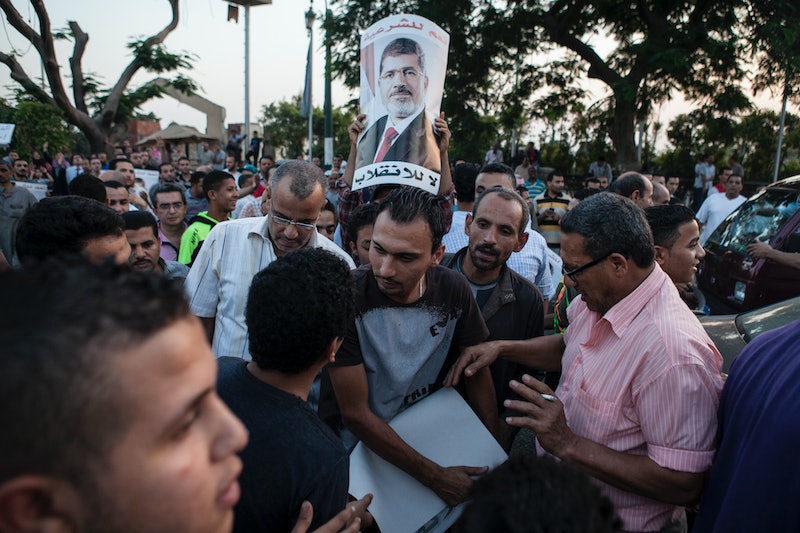 The United States government plans to suspend a portion of the $1.3 billion in military aid it gives to Egypt, sources say, as news broke Wednesday that ousted president Mohammad Morsi and 14 other senior officials will stand trial Nov. 4. Aid for counterterrorism operations, in which Egypt is a key partner, will not be affected.

The decision on military aid reportedly comes after weeks of crackdowns by the government against pro-Morsi protestors. Over 50 people were killed and hundreds more injured in the latest riots over the weekend. Thousands of members of the Muslim Brotherhood, as well as its top leadership, have been imprisoned.

In September, a court banned all of the Muslim Brotherhood's political activities, as well as its non-governmental organization, and froze its assets.

The U.S. has long been critical of the military coup in Egypt, but the rhetoric also carries a feeling of relief over the demise of Egypt's Islamist ruling party. Aid is contingent on "Egypt's progress in pursuing a more democratic path," he said. Together with the withdrawal of aid, the U.S. has stopped supplying Egypt with fighter jets and cancelled a joint military exercise.

The U.S. can’t completely withdraw aid to Egypt because of its strategic geographic location, as well as due to the increasing volatility of its lawless Sinai Peninsula, which lies in close proximity to Israel. The Peninsula has long been a site of kidnappings and a gathering ground for extremist elements.

On top of other charges over killings of protestors, Morsi is allegedly on trial for “insulting the country’s judiciary.”

"This is like all the other cases. It is a fabricated one," said Mostafa Atteyah, a lawyer for Morsi’s defense. At the core of the criminal case against Morsi, Egypt’s first democratically elected president after the Arab Spring, is his treatment of protestors in December of last year, when thousands gathered to protest his immunity from oversight and a draft of the country’s new constitution.

The Muslim Brotherhood is no stranger to government crackdowns. It was banned from political participation in Egypt for much of the 20th century after its founding in 1928. Attempted purges and crackdowns, particularly mass imprisonment during the 1950s under Gamal Abdel Nasser’s regime, only served to further radicalize the movement and create martyrs for the cause. During the period of repression, the Brotherhood created a strong social movement centered around providing social services neglected by the government, while at the same time promoting Islamic values.

The movement, doubtlessly, increased the Brotherhood’s popularity and contributed to its initial successes during the Arab Spring. But being a good service provider doesn’t always translate into being an efficient government.

An official announcement about the aid cuts is expected later this week. “We have not been officially informed of any change,” said Badr Abdellaty, a spokesman for Egypt’s foreign ministry. “Until the administration takes its decision and informs us officially, we cannot comment.”

Egyptian leader General Abdul Fattah al-Sisi, for his part, said that the country wouldn’t tolerate pressure from the U.S. “whether through actions or hints.”