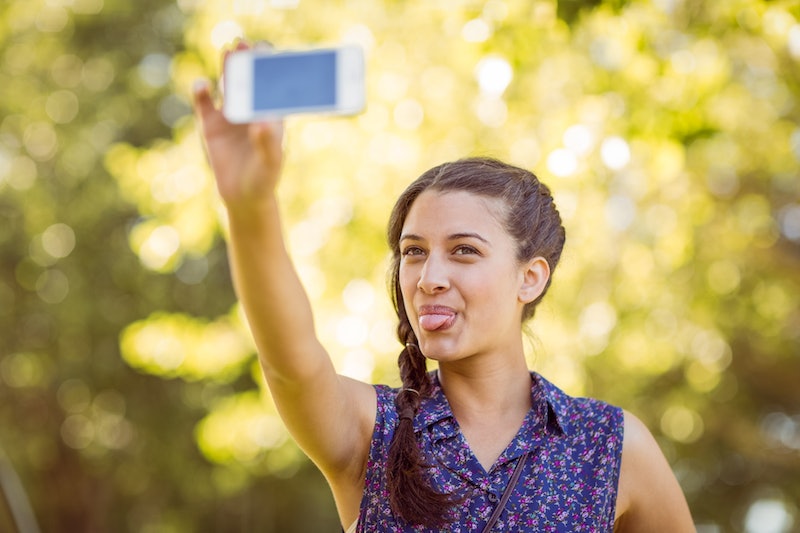 2014 was the year of the selfie. We got the selfie stick, #selfiesunday, #mcm, #wcw, Ellen's infamous selfie — heck, it's even in the dictionary now. But it's becoming common knowledge that the selfie you post isn't the first selfie you took. Even celebs will admit the image of themselves posted was the third (or 250th) attempt. If it's difficult to celebs, it's definitely difficult for us mere mortals.

Listen, posting a selfie is pretty a vulnerable deed. Not only are you pressured to make sure you have proper lighting, your makeup is on fleek, and the angle is just right, but you also have to be prepared literally read people's reactions to how you look IRL. It's not easy. Commenters can be really mean. And, after recently staying up too late just to read strangers comments about myself on social media, I've learned that not everyone in the world is filled with rainbows and niceties.

I've never been one for seflies, but I adore the women who have the confidence to stick to #sefliesunday. Despite comments I've read on celebs Instagram posts after a selfie, or even comments on my friends selfies, I definitely get that a selfie could be an emotional roller coaster. But I'm proud of the celebs and my friends who choose to post another — proof they have not stopped knowing they're beautiful. Here are the seven emotional stages everyone goes through when posting a selfie.

Kind of a relative step, but important nonetheless. I don't mean you have to be sitting next to Taylor Swift and Karlie Kloss at a Knicks game, but definitely doing something you want people to see you doing. Eating cheesecake? Worth it. Sleeping? No. Unless it's Sunday. Then just smile pretty.

I can probably count the number of selfies I have taken in my life on one hand, but experience has proved to me that experiencing frustration based on how you look, the angle, etc., is actually the hardest part of taking a selfie. This step is when the numerous photos are taken. Unless you already have your "right" angle down and a selfie is now a two-step process for you.

Posting a selfie is only half the struggle. Next, you're forced to come up with a caption accompany the picture. Hopefully with one that will enhance the picture. But, if anyone is like me, you need the caption to be something funny or clever just in case people don't like your selfie, they'll at least double tap for the caption. Or maybe it will divert some harsh comments.

The moment of truth. For most, this may be the most difficult stage. Pressing the "share" button on the bottom of the screen is when you're at your most vulnerable. And, let's be honest, you're asking yourself all the same questions you did when you were posing. Did I cover that zit? Are my eyebrows brushed? Do I really look happy enough? Do I look TOO happy?! And unless you want to go through the process of finding the right angle, light, and blouse all over again, I suggest just biting the bullet.

After posting a selfie, or any picture for that matter, to social media we watch our phones in anticipation for the likes or comments to start rolling in. But here's a secret from a non-selfie-poster: If I don't double tap, it's not because I don't like your picture. It's because I don't want to give into the confidence I know you get from the number of likes instead of what you just did. I'm just proud of you for posting it at that point.

It sucks, but it happens. We don't mean to compare the number of likes we get to our selfie from last week or, even worse, someone else's selfie. "But Bey's selfie made it to the popular page. Mine only got 40 likes..." It's not fair to us or the other individual. We are different than them, with different aspects of beauty and completely different personalities and roles in life. Not only do we quantify our picture with the number of likes we get, we quantify them by who likes the picture or what the comments say.

That one comment, although sour, shouldn't mean more to you than the positive comments. Haters are going to hate. Keep doing you, girl.

More like this
Everything To Know About Taylor Swift’s 10th Studio Album, 'Midnights'
By Grace Wehniainen and Jake Viswanath
Taylor Swift Wants To Direct A Movie Next — But You Might Have To Wait
By Radhika Menon
Confused About Blush Placement? This TikTok Makeup Hack Will Help
By Olivia Rose Ferreiro
The Pros & Cons Of The "Moisture Sandwich" Trend, Explained By Derms
By Olivia Rose Ferreiro
Get Even More From Bustle — Sign Up For The Newsletter