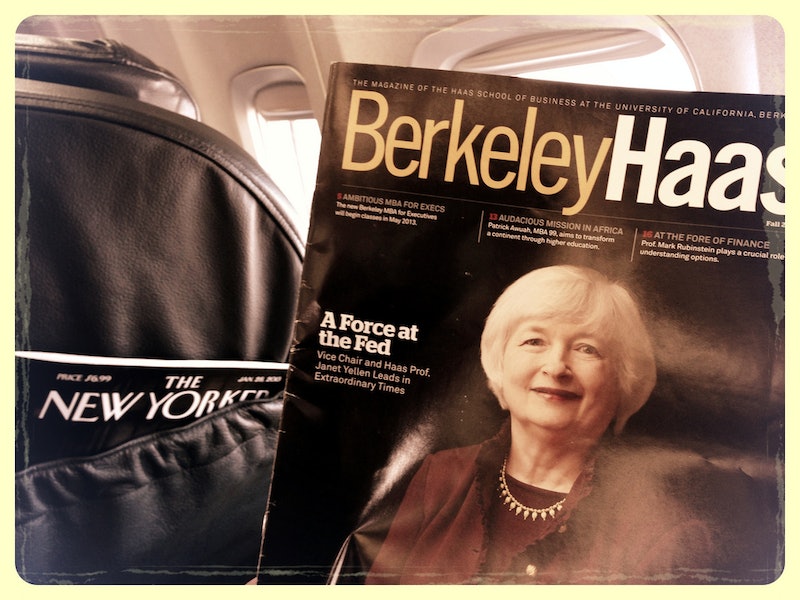 On Tuesday evening, the White House officially announced its pick for the new Federal Reserve chief: Janet Yellen, the President's ex-monetary advisor and current Vice Chair of the Fed. If her nomination is cleared by the Banking Committee and then the Senate, as is expected, she'll succeed Ben Bernanke as Chair and become the first woman to lead the Fed, not to mention the first Democrat to head up the country's central banking system in a generation. Her appointment coincides with the colorful new $100 bills that burst into circulation Tuesday, which have labeled "sexy" by CNN, though we're a little dubious that anything with Ben Franklin on it could emit much sex appeal.

Yellen's nomination, if successful, is important for three reasons: First, she's a woman, and a staggeringly successful one at that, with an impeccable track record and character praise across the board. If appointed Chair, it'll be the first time that all those Wall Street types will have to answer to a female boss. (As a side note, President Obama will surely benefit from a female nominee, in light of a spat of criticism that he tends to side with male leaders.) Second, she's a Democrat. As it turns out, all Democratic presidents since before Bill Clinton have nominated Republicans to lead the central banking system. And last but most importantly, her monetary policy is a (slight) break from norm, and if she makes it work, it could drag the long-flailing economy from the gutter.

Quick Economics 101: the job of the Federal Reserve is twofold, as they have to fight inflation whilst encouraging job growth. The Fed leaders of late, particularly Bernanke, have generally succeeded only at the first: joblessness is still high, and Obama, lawmakers, and the Fed have taken flak for not doing enough to cut it. Of course, Yellen has served successfully as the deputy to Bernanke, so the direction in which she'll take the Fed won't be a sharp change in direction — but it likely will be a change.

Yellen is a professor as well as an economist, and as the Daily Beast reports, she has written a great deal about the labor market, and veers more to the Left than her predecessors. The general impression in the financial community, a view that has in turn mildly boosted the markets Wednesday morning, is that Yellen will lean towards promoting job growth — even allowing for a little inflation, if that's what it takes to prioritize jobs.

Yellen has long been seen as Obama's financial darling, aside from a brief period in which she had to step aside for Lawrence H. Summers. Summers was briefly tipped to be Obama's nominee, but stepped aside after a Democratic backlash from the lawmakers that had long hoped Yellen would succeed Bernanke, and take steps to place emphasis on Obama's self-declared mission to boost the job market.