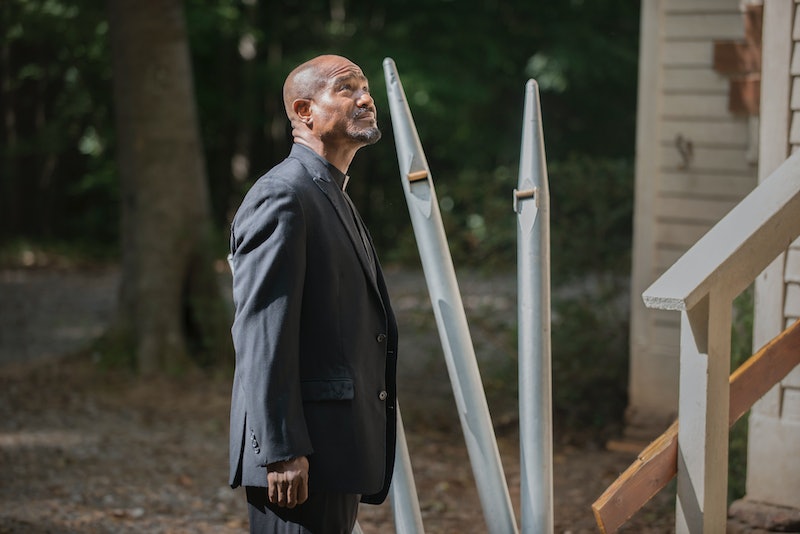 If we've learned anything from The Walking Dead's five action-packed, anxiety-enducing seasons, it's that faith can be a seriously dangerous thing. Rick told us that the key to survival in this horrific new life is to go through the motions like they're already dead, and to come out living on the other side. For those willing to fight the good fight, staying alive is enough. But for someone on The Walking Dead like Father Gabriel, his misplaced faith in humanity could mean the end of his life.

For a second there, Father Gabriel gave up his faith in God when Rick and the clan found themselves on the brink of exhaustion, starvation, and heat stroke. It doesn't last long — as the sudden downpour makes Gabriel apologize to the man upstairs for briefly betraying his undying faith. Until now, Gabriel refused to give into the "kill or be killed" way off life the rest of the world seems to have adopted, but if he doesn't begin to question his faith in other people, he may not last much longer.

Believing in something as strongly as Gabriel believes in humanity has proved to be dangerous for some of the show's other secondary characters — like Hershel, Lizzie, and the Governor. And every one of those instances has ended in some sort of cruel and brutal death.

Like Gabriel, Hershel had too much faith in humanity until his very end. In the year or so leading up to the overrunning of his farm, Hershel Greene refused to fire arms on his property. That was the deal when he met Rick's gang — you shoot, you're gone. For a while he believed there might be a cure that would bring back the undead, or at least that a part of them was still in there. He gave up on that pretty quickly, but never stopped believing in the living. It was his faith that the Governor might change his mind that lead to him being beheaded in cold blood.

The Governor had faith of a different kind — a purely evil kind — but it still got him killed. He thought he could create a community in which he was the leader and had all control. But he too thought the dead could come back, keeping walkers around to entertain his followers and others held in jars in his home. He believed in Woodbury a little too much for his own good, went a little nuts, and got himself and dozens of others killed because of it.

And then there was little Lizzie. Those poor little girls with no other family to speak of managed to make it out of the prison and to safety. In the end, the walkers didn't even have to get close to for the girls to lose their lives. Lizzie was so convinced the dead still had a piece of their humanity left that she killed her own sister to find out. Carol found her with Judith before it was too late and had no choice but to kill her.

In the comics, Father Gabriel lives well past the trip to Washington, but the TV series has changed a lot from page to screen. Gabriel's bloody end could be coming sooner than we thought. In fact, when you compare him to some of our other faithful characters, you'll find it's a miracle he's even made it this far.

More like this
'Wednesday' Star Emma Myers Thinks A Wenclair Storyline Is “Possible” In Season 2
By Alyssa Lapid
'The Queen’s Gambit' Season 2 Tweet Wasn’t From Anya Taylor-Joy
By Mary Kate McGrath, Jack Irvin and Grace Wehniainen
Ashton Kutcher Wants Danny Masterson “To Be Found Innocent” In Rape Retrial
By Jake Viswanath
Pamela Anderson's Sons Brandon & Dylan Have Their Own Hollywood Careers
By Arya Roshanian
Get Even More From Bustle — Sign Up For The Newsletter
From hair trends to relationship advice, our daily newsletter has everything you need to sound like a person who’s on TikTok, even if you aren’t.