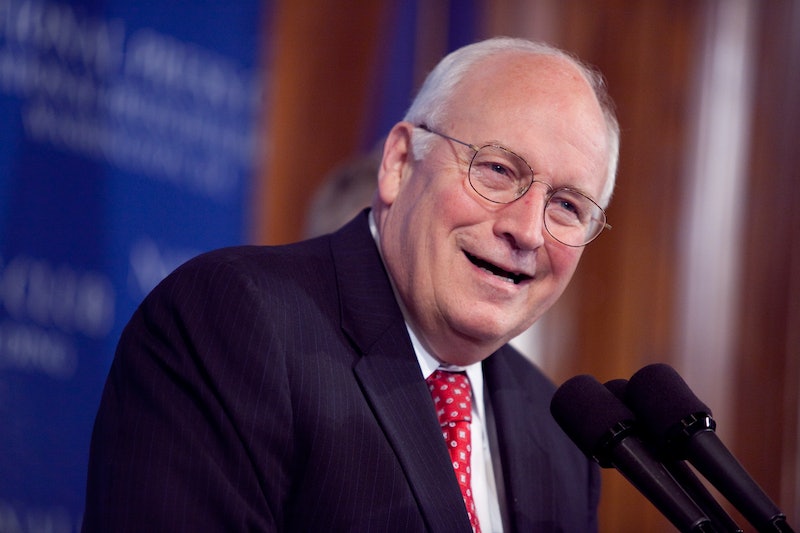 Former Vice President Dick Cheney was the main course at a roast in his honor at the Plaza Hotel Monday night, served with a side of jokes about war crimes. Sponsored by the conservative Commentary magazine, the event drew in big shots like Secretary Donald Rumsfeld, Senator Joe Lieberman, and former Attorney General Michael Mukasey. Some of the guests told Buzzfeed that waterboarding jokes featured prominently in the repertoire.

"I can see the case for enhanced interrogation techniques after Sept. 11 but I can’t really endorse sitting there drinking wine and fancy dinner at the Plaza laughing uproariously about it," said the guest, clearly not a liberal at heart. (Those waterboarded, I'd wager, probably wouldn't think the snazzy location was what made the jokes offensive.)

There were reportedly at least two waterboarding jokes, one by the former vice president himself, and one by Rumsfeld about waterboarding fish. Other jokes apparently concerned Cheney's pacemaker, and the fact that President George W. Bush didn't pardon I. Lewis "Scooter" Libby. You can check out the full list of top supporters of the event, and the roasters, here.

Now, lots of things are funny. Waterboarding, we think, is not.

Obviously, 2013 is a long way out from the Bush-Cheney administration, so here’s a refresher on what actually happens when you’re waterboarded: you’re tied down and immobilized, and a cloth is placed over your face. Then, water is poured down on your face, making you feel like you’re drowning or being smothered. Of course, it’s not just a sensation — waterboarding (through depriving you of oxygen) can also cause real brain damage, or even death.

Journalist Christopher Hitchens agreed to experience the “enhanced interrogation technique” for Vanity Fair in 2008. “Unable to determine whether I was breathing in or out, and flooded more with sheer panic than with mere water, I triggered the pre- tarranged signal and felt the unbelievable relief of being pulled upright and having the soaking and stifling layers pulled off me,” Hitchens later wrote of the encounter. The video below shows what happened — but remember that, unlike Hitchens, detainees don’t have a safe-word or metal objects to drop in case of extreme distress.

Senator Lieberman might have really hit the home run of the night when he joked (according to an attendee) that, "[I]t’s nice that we’re all here at the Plaza instead of in cages after some war crimes trial.” Nice.

Since it seems like nothing was too crude or off-limits for the honored guests at the Veep’s Commentary roast earlier this week, we came up with a few of our own suggestions for future roasts of Cheney. We're no comedians, so they're not that funny. But you know what? Neither are jokes about waterboarding.

"Now, Dick Cheney's own children have really settled the debate about whether nature or nurture is more important in what a kid grows up to be. And no, we're not talking about Mary Cheney's big fat gay wedding — we're talking about the fact that her sister Liz grew up to be too much of an opportunist to support it."

“Some folks want to hold Dick accountable for what happened during the Bush years. I say, let him be — the man has had a change of heart since then.”

“We all know Dick was raised Methodist, but between his support of Israel and board membership at the Jewish Institute for National Security Affairs, maybe he should consider converting to Judaism. But then again, that's a long, hard process and he’s already flunked out of secular school. Twice.”

"Dick was always a staunch proponent of sending out troops to war, but based on his shooting record we know he kept more of them alive by staying out of the field with them."