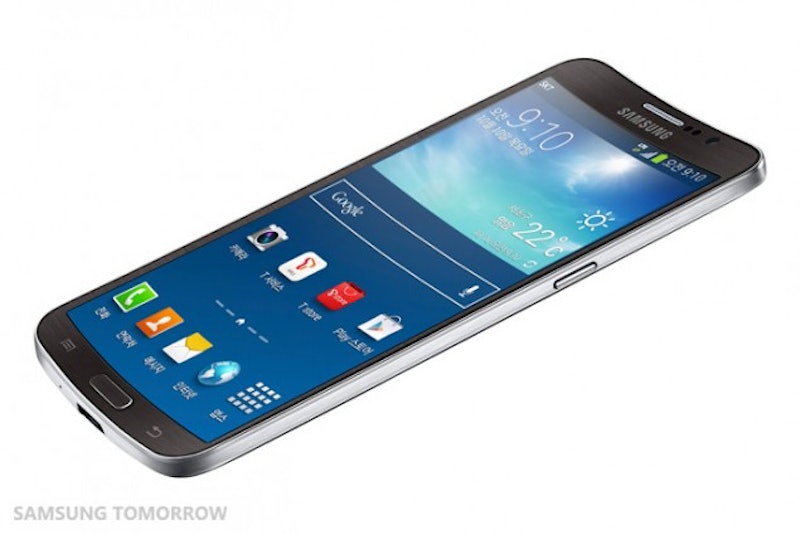 As Samsung beats LG to the punch to announce the world's first curved smartphone, for Apple, it's just been another week of generally dominating the market. As anticipation ramps up for the new line of iPads after its "release date" was leaked (Oct. 22, less than two weeks away!) Apple is still preparing to scatter the new iPhones around the world: on Oct. 25 the iPhone 5S and 5C hit Europe, and a week later, on Nov. 1, the rest of the world will get them.

Still, it's not all good news for Apple: the plastic 5C, which was billed as a more affordable alternative to the high-end 5S but is exactly as expensive as the lowest-memory edition of it, isn't doing so well. Though the 5S, particularly the gold version, has been flying off the shelves in America and in the East — where, in countries like China, the color gold is prized — the 5C has already been knocked down in price by retailers, and several are offering a $50 gift card with the purchase of one. Apple has only disclosed that nine million iPhones were sold in the first weekend they were available, so we don't know exactly how the 5C is measuring up to the 5S. Chances are, not well.

The iPad line's Oct. 22 release date has incited a new frenzy for Apple fans, who are particularly thrilled about this new chip that Apple's rolling out in all its newest products. The completely un-catchy "64-bit A7 processor", seen in the 5S though not the 5C, ups the ante from 32-bit — which, if you do the math, means it's twice as efficient. According to Quartz, it represents a "clean break" in all Apple products, and is the divider between "then" and "now" — it's apparently that good.

Additionally, the new iPads will probably have the 5S' Touch ID technology, also known as fingerprint recognition, and the Retina display first seen in the Retina line of Macs. The high-resolution Retina interface is pretty much the most vivid pixellation the human eye is capable of seeing, and if the iPads adopt it, it's hard to see how they can better the screen much more. (It's hard to see better, period.)

Meanwhile, LG was widely speculated to have beaten Samsung in the curved-smartphone race, since LG has already started mass production of "unbreakable" curved panels. Samsung has been quietly working on the Samsung Galaxy Round for a while, and the curve allows users to move the most desired applications from one side to another, to open more than one app at once, and to reorganize what they're doing from right to left.

Speaking of tech companies going head-to-head, Apple is also inwardly fist-pumping (or outwardly, we're not sure; Apple never tells us anything) over the Obama administration's stance on Samsung yesterday, which had the company's older phone and tablets actually banned from the U.S. When Apple was ordered to do the same by the Trade Commission, President Obama personally signed a waiver to overrule the Commission's ruling, and Apple merrily continued production. Awkward.

More like this
20 Smart Devices Under $35 That’ll Change The Entire Vibe Of Your Home
By Emma Carey
Here's How To Get Your iPhone To Update Automatically Forever
By Emma Carey
30 Clever Ways To Slide Into Your Crush's DMs
By Griffin Wynne, Carolyn Steber and Lexi Inks
Everything To Know About 'The Last Of Us' TV Adaptation
By Sophie McEvoy and Radhika Menon
Get Even More From Bustle — Sign Up For The Newsletter