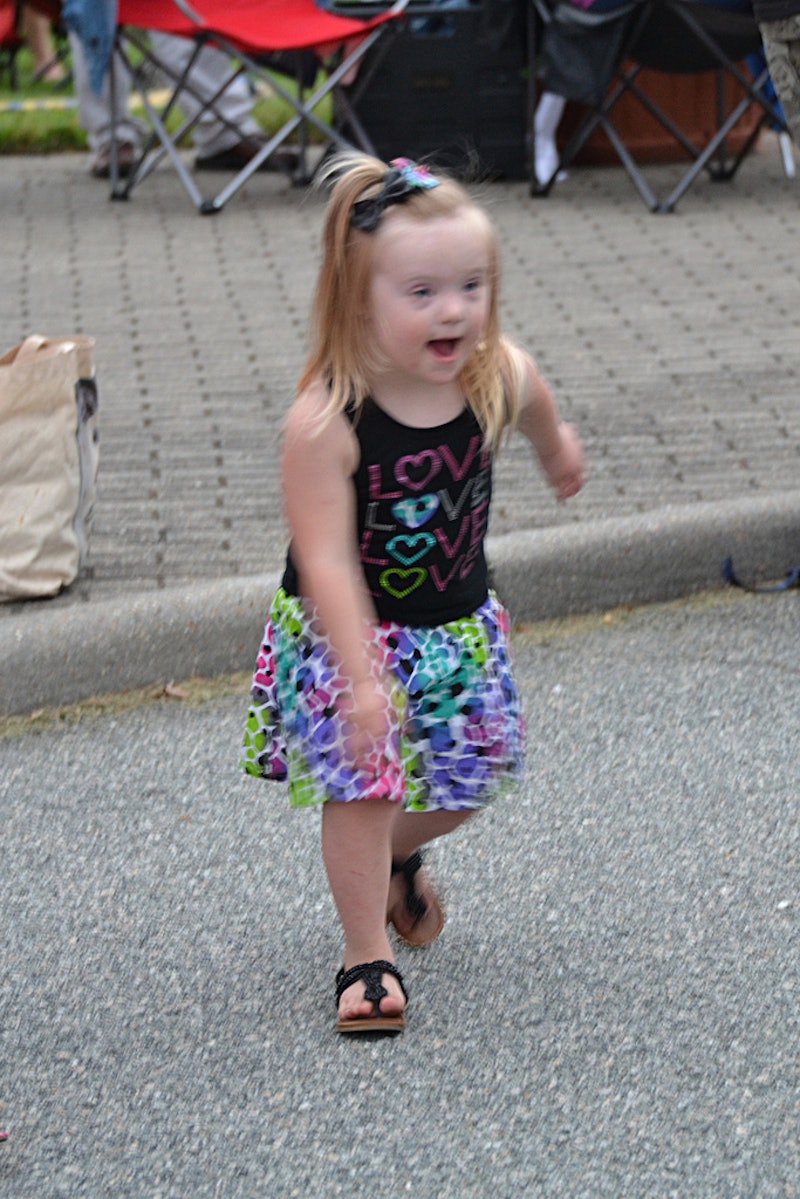 It's Down Syndrome Awareness Month and it's time we all educated ourselves. On January 12th 2013, 26 year old Robert Ethan Saylor went to see a movie. Shortly after it ended, he died of asphyxiation during an encounter with three off-duty sherriff’s deputies who worked security for the mall that housed the theater. Saylor had Down Syndrome. He wanted to see the movie again and had refused to leave the theater. For this, he died.

I don’t really don’t want to talk about Robert Ethan Saylor, though. It makes me too angry and too sad. Instead, I want to talk about Addy*. Addy is my cousin’s daughter. She has Down Syndrome. She is one of the most wonderful people I know. She loves to dance and play with her siblings and thinks that hopping off of the bottom step is the most fun activity ever invented. Her smile makes you smile.

Down Syndrome, like really any physical, mental, or developmental disability, is not well understood by society at large. I know our family didn’t know much about it before Addy, and when her parents learned before she was even born that she would be a Down baby, it was a hard thing to hear. But you’d never know it now. They not only love her, but they are proud of her and everything she has already accomplished. Watching them, I marvel all the time that they find such a seemingly effortless balance between meeting her unique needs and yet not treating her any different than their other kids.

I love my cousin, and I love her kids, and so when I read stories like Robert Ethan Saylor’s I can’t help but think of Addy, about how people will misunderstand her all her life. And it’s painful to think that the little girl who likes to stick out her tongue, who’s a picky eater and sleeps like a rock could all too easily become a tragedy, not because she does anything wrong, but because the world she lives in doesn’t think it’s important to teach law enforcement officers about people with disabilities. To teach anyone about people with disabilities.

I didn’t grow up with a person with disabilities the way some of my friends did. But when things like this or this or this happen, it still upsets me on a very personal level. And what is most upsetting is the fact that the bigotry around this issue isn’t the result of people being evil or irredeemable. It’s the result of ignorance. Ignorance breeds fear and fear breeds more ignorance and the cycle goes on and on, and until it is broken, there will always be another Robert Ethan Saylor. That is the heartbreaking truth.

According to the National Down Syndrome Society, October is Down Syndrome Awareness Month, so take some time this month to visit their website, or check out Autism Speaks or CerebralPalsy.org or any other condition you’ve heard of but aren’t quite sure what it is. Even pick up a novel about people with disabilities. There are plenty. Educate yourself. Break the cycle. I promise, it’s worth it.

More like this
The 19 Best Tweets & Memes About Bisexual Awareness Week
By Lexi Inks
This Psychological Effect Might Be Keeping You From Hitting Your Goals
By Lexi Inks
Here’s Your Daily Horoscope For September 28, 2022
By Mecca Woods
Here's Everything You Need To Know About Shuffling Your Tarot Deck
By Brittany Beringer
Get Even More From Bustle — Sign Up For The Newsletter