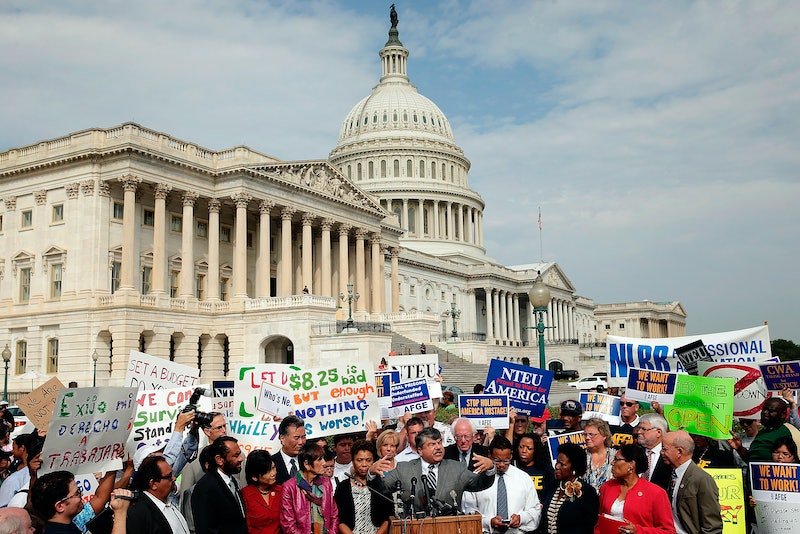 So it looks like the government shutdown isn't the only thing Democrats are fuming about: On Tuesday, eight House Representatives were arrested outside the Capitol in a protest that demanded attention be paid to the stalled issue of immigration reform. The move towards broad reform has been dialed down in Congress thanks to our little national-shutdown problem, but a proposed Democrat bill maps a route to citizenship for undocumented immigrants. The arrested representatives, all Democrats, included Joseph Crowley and Charles Rangel (both N.Y.), Keith Ellison (Minn.), Al Green (Texas), Luis Gutiérrez and Jan Schakowsky (both Ill.), Raul Grijalva (Ariz.), and John Lewis (Ga.).

“A huge majority of the American people think we ought to fix the immigration system, and we have the votes to do it,” Rep. Zoe Lofgren (D-Calif.) said. “But there is no vote. There is a problem here with the American democracy.”

Following the immigration rally, which was held in the National Mall park outside the Capitol, the representatives and other protestors formed a human roadblock in a street near the Capitol Hill lawn. Police didn't take too kindly to that and, in the most action Capitol Hill's seeing these days, arrested them along with at least 200 other protestors. The charges were for "crowding, obstructing, and incommoding" — which is a misdemeanor.

Gutiérrez (R-Ill.) said that he had masterminded the civil disobedience "so the Speaker of the House can free Congress and finally pass immigration reform.”

Republicans protested the protestors on Twitter, and, having suddenly decided to play by the rules, argued that the National Mall was technically a national park and therefore should be on lockdown. They also called Obama out for having a double standard, because WWII vets had been blocked from entering their memorial on the Mall. “The Mall is supposed to be shut,” said Brad Botwin of Help Save Maryland (an anti-illegal-immigration group,) who had come to the Mall to protest the protestors. “Why is the Park Service helping illegal immigrant groups and desperate labor unions to have a rally today?”

Good question. Turns out the National Park Service re-opened the memorial last week on the basis of First Amendment free-speech rights, which was the same justification they used for allowing the immigration rally on the Mall yesterday. The White House totally had the protestors' back and commended the protest, calling it an "enthusiastic demonstration of support for immigration reform."

"It is time for House Republicans to put politics aside and join Democrats to fix our broken immigration system and make the economy stronger," said White House Press Secretary Jay Carney.

(Note: Not Al Green of Congress, but appropriate nonetheless.)