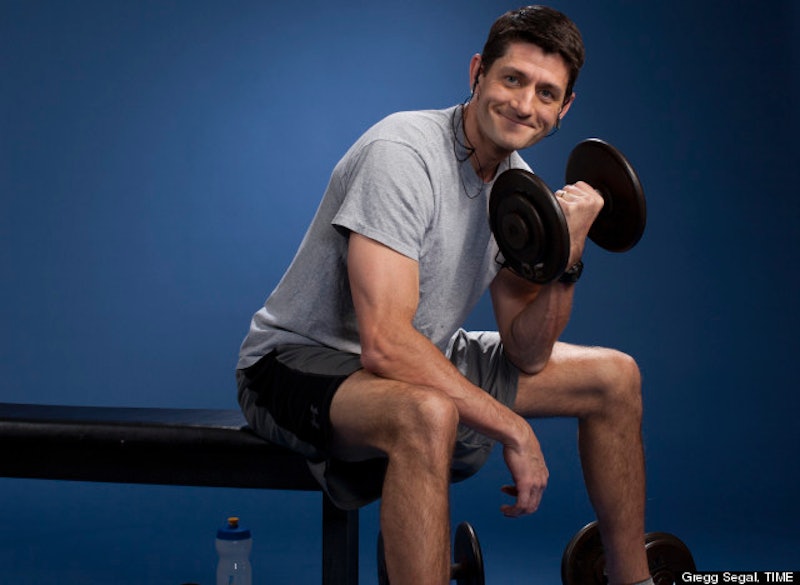 Let's take stock of the government shutdown, Wednesday, shall we? At least 800,000 workers have been furloughed, the Centers for Disease Control and Prevention can’t combat salmonella outbreaks anymore, and poor moms and kids no longer know where their next meals are coming from. But don’t worry — Paul Ryan can still do pull-ups in the comfy confines of Congress’s private gym.

ThinkProgress confirmed yesterday that while the gym for congressional staffers was shut down a week ago, the House gym, open exclusively to actual elected members of Congress, has remained open since the partial government shutdown— key word here being “partial” — commenced nine days ago. The lights are still on, the pool is still heated, and the whole facility is being cleaned daily by maintenance staff. This costs money, of course, but hey, that’s why they carved out an exemption for “essential” government services, right?

In response, Democratic Representative Earl Blumenauer is circulating a letter pressing Boehner to shutter the gym during the shutdown. Also, Democratic Representatives Patrick Murphy of Florida and Bill Foster of Illinois plan to introduce the Shutdown Prioritization Act, which would ban the Architect of the Capitol — the government agency tasked with maintenance and operation of capitol buildings — from running the gym during any future government shutdowns. (It certainly says something about the state of American government that rather than, say, a bill to strengthen voting rights, the House is instead pushing legislation to help better manage future government shutdowns.)

In the meantime, word got out this morning that the obscure government agency that approves new breweries and beer recipes has been closed due to the shutdown, which “could create huge delays throughout the rapidly growing craft beer industry.” That’s a particularly cruel twist, as drinking has apparently been a favorite activity of many a furloughed worker. But you know, at least Congress is able to blow of some steam with racquetball.

On the plus side, Starbucks is offering free cups of coffee to customers who treat the person next to them to a cup, in an attempt to get people to “support and connect with one another” amidst the shutdown, which will probably work to comfort the nearly 1 million furloughed workers, except not really at all.

Meanwhile, the wealthy Koch brothers of Koch Industries, who you'll probably recall as major Tea Party donors, are furious about a letter from Senate majority leader Harry Reid that accuses the brothers of pushing to defund Obamacare. The Koch brothers have long worked against the health law, but many of the organizations they fund take sneakier approaches to eliminating Obamacare — like repealing the law, a move they're more comfortable being tied to.

Said their spokesperson: “Koch believes that Obamacare will increase deficits, lead to an overall lowering of the standard of health care and raise taxes... However, Koch has not taken a position on the legislative tactic of tying the continuing resolution to defunding Obamacare, nor have we lobbied on legislative programs defunding Obamacare.’’