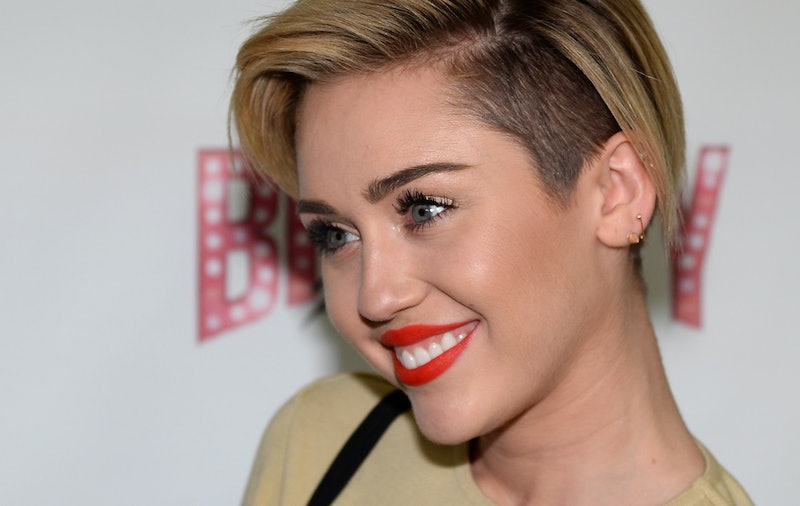 It seems just about everyone is weighing in on the ongoing saga of Miley Cyrus' transformation from squeaky-clean Disney star to a hyper-sexualized pop singer who tells reporters over the age of 40 that they're no longer having sex: Including Gloria Steinem. In an interview with New York Magazine at the Women's Media Awards last night, Steinem talked about Cyrus' behavior, and specifically the feud between her and musician Sinead O'Connor. (If you're not aware, Sinead O'Connor is really mad at Cyrus for making fun of her issues with depression.) "I think they’re disagreeing on substance," Steinem said of the feud, which has been ongoing through Twitter posts and a series of open letters posted by O'Connor. "I think they have different views of the world, and I would much rather be O’Connor ... I mean, she’s a serious human being. Perhaps they both are, but we don’t know that yet."

When it's pointed out that Cyrus is only 20 years old, Steinem continued, "But you have to remember that Sinead’s background — she’s been sexually abused. She was courageous in pointing out sexual abuse by the Catholic church. I’m sure it does pain her to see a young woman being oblivious to the endangerment of sexuality."

While I can't stand behind O'Connor's subtle slut-shaming in her letters (there's something very problematic about O'Connor's assertion that Miley needs to stop record executives from making her be more and more sexual), I do agree that Miley was wrong to basically make fun of O'Connor's past history with depression and suicidal thoughts — and that they're both coming from very different places.

New York Magazine also spoke with Rosario Dawson, who seemed to be more behind Cyrus' new look: "For some reason, when men [express their sexuality], it’s kind of like, cool, and masculine and mannish. But when these girls do it, it’s like, ‘You’re too young.' And there’s this responsibility that’s put on them just because of being female, that they’re supposed to be these role models. And I am interested in the idea that they’re kind of flipping the bird to that and just going, 'I’m doing my thing.'"

More like this
Romance Authors Are Mobilizing For Reproductive Rights
By Natalia Perez-Gonzalez
A New Portrait Shows King Charles With William & Kate Before The Queen’s Funeral
By Stephanie Topacio Long
Who Is Nick Cannon Dating & How Many Kids Does He Have?
By Jordyn Tilchen and Radhika Menon
Cheryl Remembers “Bright Star” Sarah Harding In Heartfelt Essay
By Sophie McEvoy
Get Even More From Bustle — Sign Up For The Newsletter