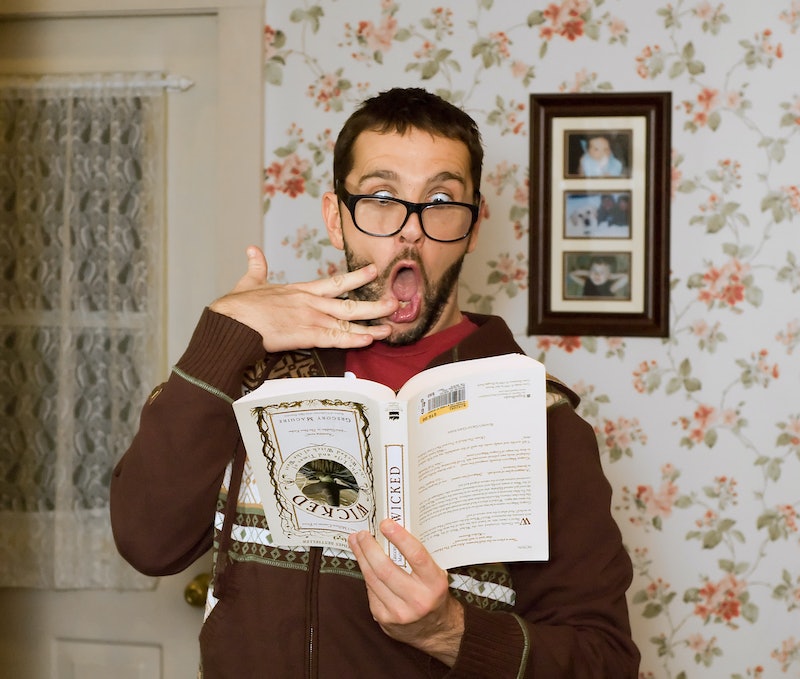 Some exes are perfectly nice, sure. But for lots of them... well, let's just say they're exes for a reason. But lest you think that you've dated the worst human beings possible, here are 9 characters who are (hopefully) even worse than what you've encountered. And if they aren't, then we sincerely apologize for your misfortune.

1. Gatsby from The Great Gatsby

Your ex might have been obsessive, but chances are good Gatsby's got him beat. After all, he spent five years thinking about a girl he'd only known for (at best) a few months, and organized his entire life around trying to get her back. Gatsby built a whole elaborate fantasy around Daisy, and he can't let go of it even after it becomes clear it isn't going to work out. The guy clearly has a screw loose.

No matter how jealous your ex was, Othello is hard to compete with. He's so prone to jealousy that just a few words from Iago are able have him practically ready to accuse his wife on the spot. And though his jealous rage doesn't reach a climax until the final act of the play, by then it's gotten downright murderous.

3. Cathy and Heathcliffe from Wuthering Heights

One of the best matched pairs in literature, these two awful people deserve each other, but you definitely deserve better than either one. Whether it's Cathy's insensitive selfishness or Heathcliffe's possessive streak, we hope that you've never dated anyone who's turned out to be as bad as either of these two.

4. Aureliano II from 100 Years of Solitude

Spoilers: There's a lot of incest in 100 Years of Solitude. And by the end of the family dynasty that the book recalls, things have gotten really weird. Like, really weird. So even if your ex turned out to be a total freak show, at least he or she has never slept with an aunt, right?

5. Abigail Williams from The Crucible

Exes do all sorts of awful things to get revenge after a breakup, but not many of them ever stir up enough paranoia to plunge a whole town into chaos. But Abigail Williams manages to mastermind just such a thing. She takes down not just the lover who spurned her, not just his wife, but a sizable chunk of Salem, Mass. as part of her revenge. Hell hath no fury, I guess, and hopefully neither do you.

6. Odysseus from The Odessey

Getting left sucks. A lot. But at least your husband never went off to war for 10 years and then took another decade getting home, right? If I were Penelope, I would have kicked him to the curb as soon as he dared walk through the door and questioned whether I'd been faithful. So even if you've dated a cheating, leaving hypocrite, take comfort that it could have been worse. You could live in a time where you had no choice but to take him back.

7. Bella and Edward Cullen from Twilight

This one should be fairly self explanatory. But if you've been hooking up with any possessive, sparkly vampires with weird, repressive moral values, or any weak-willed, dependent, unhealthily selfless quiet-types, it might be time to reevaluate the life choices that led to your current romantic history. Because no matter how bad your exes are, even if they top every other name on this list, they should not beat Edward or Bella. Not ever, ever, ever.

More like this
Drew Barrymore & Justin Long’s Reunion On Her Talk Show Had Her In Tears
By Radhika Menon
She Founded American Girl To “Bring History Alive.” Then She Made Over A Town.
By Amanda FitzSimons
10 Ways To Be More Empathetic To Your Partner
By Raven Ishak and Lexi Inks
Are Quality Time & Gift-Receiving Love Languages Compatible?
By Lexi Inks
Get Even More From Bustle — Sign Up For The Newsletter