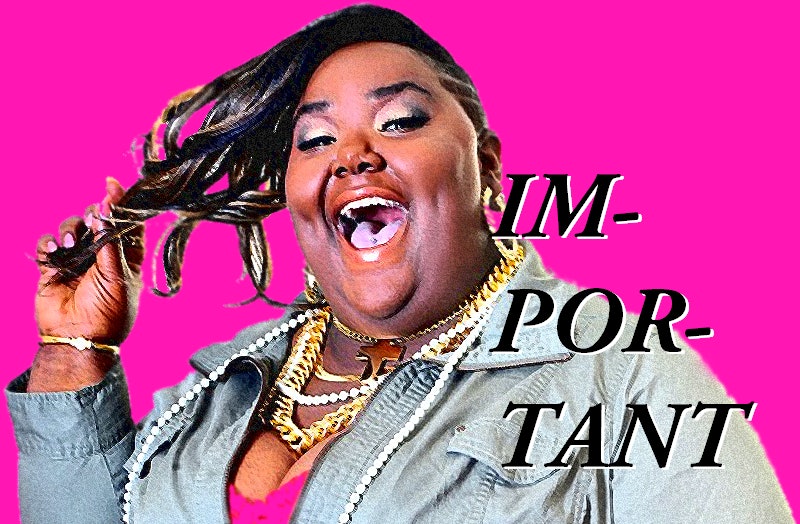 Mz. 007, a rapper from Saint Louis, Missouri, is important. And she wants you to know it. Her single "Important" starts out, "Pass me a drink, I'm important!" That demand is followed by unabashedly vain lyrics such as, "I'm comin' through, bitch, I'm gorgeous!" Which she is. The music video was published on YouTube on August 21, 2014; within a couple of months the song blew up on Tumblr, collecting more than 26,000 notes, after writer Les Fabian Brathwaite posted a link to NewNowNext. The post accompanies captioned GIFs of Mz. 007 dancing with the promise, "It’s just the song you need to greet the day and get ready to start snatching wigs like it’s your true calling."

Mz. 007's Twitter profile asserts that she is a #FatFlyChick and the #PrincessOfHipHop. Who's gonna argue? Sporting hot pink lipstick and piles of jewelry, décolletage on display in tight lingerie, Mz. 007 doesn't pull any punches. Her brash, inspirational music about partying and loving yourself is on par with tracks by Beyoncé and Nicki Minaj, who voiced similar sentiments when they collaborated on "Flawless."

I love that Mz. 007 chose "important" as the word to emphasize, resisting the implicit message of the American mainstream, namely that a plus-size woman of color doesn't matter. She doesn't go for the easy sell, the quicker concept, and stop with, "I'm pretty." This in-your-face emcee is beautiful, yes, but that's not the whole story. The song's central point is simple, and true: Mz. 007 is saying, "I take up space and I deserve to. I am valuable." In her own words, "Everybody fuck with me; I make big shit happen."

The only part of the song that I have a problem with is the very beginning, before the music even starts. Mz. 007 blows smoke at the camera and posits, "So, I told a bitch, I'm fat; you ugly. I can fix fat, but you can't fix ugly." To me, this is a really tone-deaf and weird way to preface a song about embracing yourself no matter what the haters say. It undermines the rest of the lyrics. Firstly, being fat is not something that anyone needs to "fix." Secondly, shouldn't body positivity embrace "ugly" as well as fat?

Body positivity is meaningless if it only includes "pretty" people. (Which it doesn't, of course.) I'm reminded of the Echosmith song, "Cool Kids," a sweet anti-bullying anthem: "I wish that I could be like the cool kids, 'cause all the cool kids, they seem to fit in." Let's not have a cool-kid clique in world of body acceptance. People with facial features that don't fit the norms of beauty — which, by the way, are racist and transphobic — those people are just as important as anyone with classic good looks.

I may be accused of over-analyzing "you can't fix ugly," but language has concrete ramifications. Language has tremendous power as our primary medium of communication. It is a tool that humans use to build the world we inhabit, to construct paradigms that determine how we behave. The reason why Mz. 007's "Important" is, well, important, is the same reason why the song's intro is troubling. Don't get me wrong; I still think it's an awesome track, one well worth playing on repeat.

I've identified as "vanity positive" for a while. There's a stigma against saying, "Yes, I am fabulous. I look fabulous because of how I choose to present myself, I'm funny, I'm smart," etc. You're not supposed to seem stuck-up. I think this stigma is ridiculous. It makes no sense to encourage everyone to go around feeling lousy and despising themselves. This is also the reason why I love Kanye West (foibles aside), whose latest album Yeezus featured a song called "I Am A God." Obviously West is not literally a deity, but comparing himself to one demonstrates what he thinks of the world that wants to tear him down. "I am a god" is a radical statement for a black man often condemned as "arrogant" to make. I agree with West: Far better to proclaim how great you are than to be like the Plastics in Mean Girls, criticizing themselves in the mirror as a false performance of humbleness. Fake it 'til you make it, huh?

Mz. 007's "Important" most excites me because soon young kids will be listening to it. Hopefully not, like, toddlers, but kids going through the hell of middle school. I want them to hear this song and realize, "Hey, I'm important too!" Even if sixth graders first hear "Important" and make fun of it because a fat woman is extolling her own excellence, the message will be there in the background. I want preadolescents to learn: This is something a person can do. They can loudly celebrate how cool they think they are. In a decade I want to be working with young adults who grew up on this song and others like it, who are confident and self-loving. I want them to have the jumpstart that you and I were denied.

More like this
Instagram & Facebook May Finally Lift Their Notorious Nudity Ban
By Allie Fasanella
Phoebe Dynevor Serves ‘Bridgerton’ Underboob In Stunning Floral Gown
By El Hunt
Beyoncé Wore A Golden Sheer Gown At Her VIP Dubai Concert
By Sam Ramsden
The Best Press-On Nails For Valentine's Day 2023
By Audrey Noble
Get Even More From Bustle — Sign Up For The Newsletter
From hair trends to relationship advice, our daily newsletter has everything you need to sound like a person who’s on TikTok, even if you aren’t.