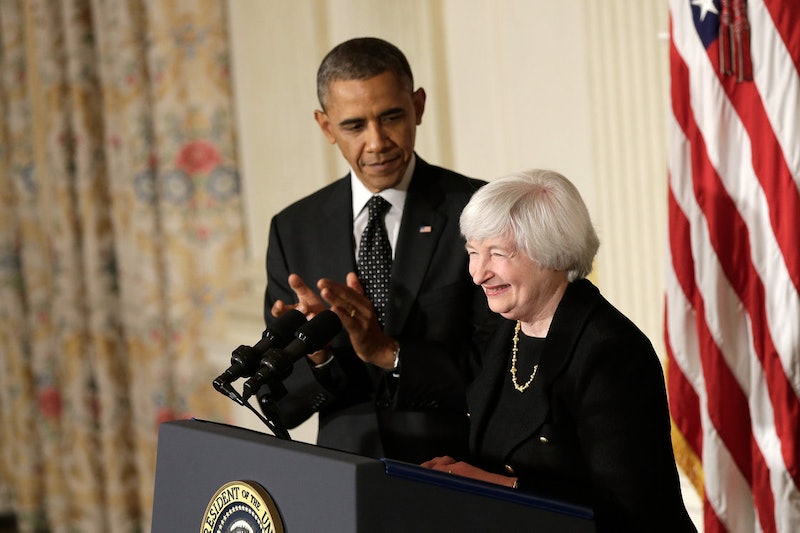 On Wednesday, President Obama nominated Janet Yellen to head the Federal Reserve. There was much fanfare before her appointment was even officially announced. More than 350 economists signed a letter urging Obama to appoint her, as did 21 Senate Democrats. Some of the excitement is over the fact that Yellen isn’t Larry Summers, who was Obama’s first pick for the job, but dropped out after learning that he’s hated by just about everyone who doesn’t already serve in the White House.

But that explanation is a red herring, because Yellen is a superb candidate in her own right. She has a little something for everybody — and not just progressives, although there’s plenty about Yellen for progressives to love. Here are four types of people who should be excited by her nomination:

In the words of Bloomberg’s Justin Wolfers, Yellen is “quite simply more qualified for the job than any of her predecessors.” He’s right.

First, let’s take a look at her academic career. After receiving her Ph.D. in economics from Yale in 1971, she became an assistant professor at Harvard, where she taught a young Larry Summers. She was later a professor at UC Berkeley’s Haas School of Business, where she twice won the Eart F. Cheit Award For Excellence In Teaching, and in between Berkeley and Harvard, she lectured at the London School of Economics.

But she’s also super experienced in actual policymaking. She started as a staff economist at the Fed for two years in the late 70s. Then she taught for a while (see above), and in 1994, Bill Clinton appointed her to the Fed’s board of governors. Three years later, Clinton tapped her to chair the Council of Economic Advisors. From 2004-2010, she was president of the San Francisco Federal Reserve, and Obama appointed her to the Fed’s vice chair in 2010, where she’s served ever since.

So, if experience is what you want in a Fed chair, Yellen’s got plenty of it.

The Federal Reserve has what’s called a dual mandate: Maximize employment on the one hand, and keep inflation low on the other. Fed chairs have to balance these two priorities, and have a lot of latitude with regard to what they focus on during their tenure.

Yellen, who’s the first Democrat to be nominated to chair the Fed since 1979, has built a pretty rock-solid reputation as a monetary dove — that's an economist who focuses on boosting employment rather than keeping inflation low. Some testimonials:

In a speech earlier this year, Yellen had this to say about the Fed’s focus on jobs:

With employment so far from its maximum level and with inflation currently running, and expected to continue to run, at or below the Committee's 2 percent longer-term objective, it is entirely appropriate for progress in attaining maximum employment to take center stage in determining the Committee's policy stance.

It’s not like Yellen will be be single-handedly strong-arming employers into hiring more workers. Plenty of things influence unemployment, and Fed policy is only of them, but the unemployed definitely have an ally in Yellen.

Yellen was the target of an insidious, transparently sexist whisper campaign prior to her appointment. Behind the scenes, supporters of Summers worried that she lacked the “gravitas” for the job, which is just slightly more subtle than bemoaning her lack of testicles and a Y chromosome. The Wall Street Journal was even more shameless:

Janet Yellen, the current Fed vice chairman, has emerged as the favorite of the Democratic left. As an economist with long experience at the Fed, she doesn’t lack for professional credentials. But her cause has been taken up by the liberal diversity police as a gender issue because she’d be the first female Fed chairman.

Got that? Liberals want Yellen at the Fed, and Yellen is a woman; therefore, they must only want her at the Fed because she’s a woman, and not because of the “long experience” or “professional credentials” mentioned one sentence earlier in the same paragraph. It’s kind of like when the GOP nominated a Mormon for president last year, and everyone started accusing the “conservative religion police” of supporting him solely because of his Mormon faith. Except no one said that, because that’d be craaaaazy!

Ezra Klein wrote extensively over the summer about the sexism Yellen faced. In any event, the point here isn’t just that Yellen’s is a woman; it’s that she’s an incredibly qualified woman who, despite nasty sexist attacks from prominent political voices, is on track to become the first female chair of the Fed. Her appointment is an indicator that old-school sexist gender-baiting just doesn’t work anymore, and that’s something for everybody to celebrate (except for old-school gender-baiters, of course).

At the end of the day, Yellen’s biggest qualification isn’t that she’s worked at the Fed for more than a decade, or that she’s a woman, or that she’s a liberal. It’s that, when it comes to predicting macroeconomic trends, she’s been right. Overwhelmingly so.

Nowhere is this clearer than in the lead up to the Great Recession. In May of 2007, Yellen sounded the warning bell with regard to the housing market, saying that “[t]he risk for further significant deterioration in the housing market, with house prices falling and mortgage delinquencies rising further, causes me appreciable angst.” Nobody really listened to her. That December, as the rest of the Fed was flatly predicting that a recession wouldn’t happen, Yellen was saying the opposite. “The possibilities of a credit crunch developing and of the economy slipping into a recession seem all too real,” she said at a Fed meeting in December of that year.

She was right. Her excellent predictive record isn’t confined to before the financial crisis, either: The Wall Street Journal conducted an extensive methodological analysis of over 700 predictions made by 14 Fed policymakers between 2009 and 2012, and Yellen came out on top.