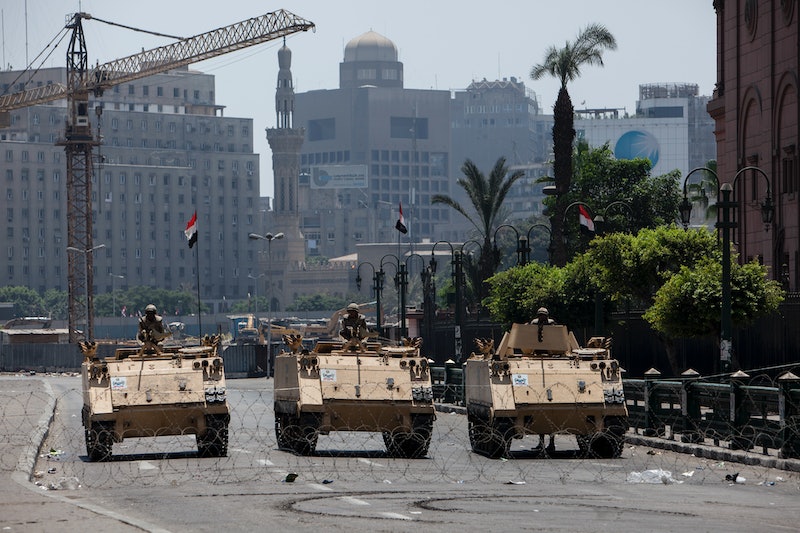 After much hemming and hawing about how it would actually reprimand Egypt for crackdowns on protestors, the United States finally told General Abdul-Fattah el-Sisi on Wednesday that it would freeze some of the country's aid. And even that is temporary, to not anger a strategic partner in an unstable part of the world.

Later that day, Defense secretary Chuck Hagel told el-Sisi that in total, the U.S. would withhold some major shipments, such as missiles, helicopters, and tank parts, as well as $260 million promised for Egypt's budget. Considering that total U.S. aid to Egypt clocks in at $1.3 billion, the reprimand for the crackdown pro-Muslim Brotherhood protestors is more of a slap on the wrist.

“This is not meant to be permanent; this is meant to be the opposite,” said a senior administration official, trying to soften the blow as much as possible. “It is meant to be continually reviewed.”

America repeatedly stumbled over how to preserve its relationship with Egypt without condoning the massive regime-sanctioned violence against protestors. It opted to not label the ousting of Mohammad Morsi, the country's first democratically elected leader after the Arab Spring, a coup — even though that's what it almost certainly was.

“The administration is trying to have it both ways, by suspending some aid but continuing other aid,” said Senator Patrick J. Leahy, adding that this "muddled" the message.

After reports first surfaced of potential aid cuts, Israel — Egypt's northeast neighbor along the highly volatile Sinai Peninsula — responded with "a mixture of disappointment and alarm," the New York Times reports. It expressed anxiety that a suspension in aid could void its 1979 peace treaty with Egypt.

“Our interest is basically having the peace with Egypt continue,” said Israeli prime minister Benjamin Netanyahu last week. “That peace was premised on American aid to Egypt, and I think that for us is the most important consideration, and I’m sure that’s taken under advisement in Washington.”

Other Israeli officials, speaking under the cloak of anonymity, were more pointed, saying that America reprimanding Egypt, an ally, "is about America’s standing in the Arab world."