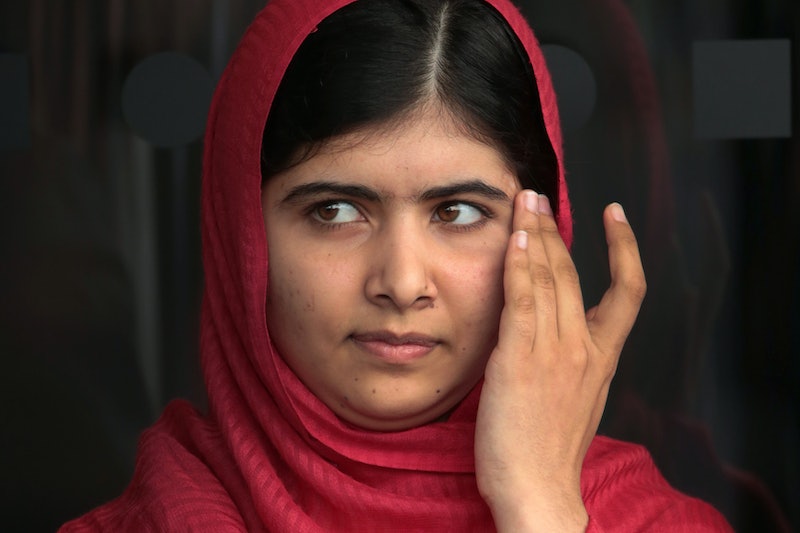 Prolific 16-year-old activist Malala Yousafzai won the European Union's Sakharov Prize for freedom of thought Thursday for her work promoting girls' education. The annual award, also known as the Nobel Prize for Human Rights, is decided o by the heads of the European Parliament's political parties. Yousafzai beat whistleblower Edward Snowden for the prize, and is also a frontrunner for the Nobel Peace Prize, to be named Friday, with betting agencies naming Yousafzai as the favorite to win.

After getting her start blogging for the BBC after the Taliban took over her hometown in the Swat Valley of Pakistan, Yousafzai began attracting media attention — both domestic and foreign — for her vocal opposition to their regime, which denied girls a right to education. The visibility caught up with her: One year ago yesterday, she was shot through the head by a Taliban gunman, who boarded a school bus on her way home. She was soon transferred to Birmingham, England, for recuperation, and she's used her new home there, as well as the media attention from the injury, to create a global platform from which to spread her message.

It's been an insanely busy, accomplishment-filled week for Yousafzai. On Wednesday, the one-year anniversary of the Taliban's attempted on her life, her first book, I Am Malala , was released. It's currently the second-best-selling book on Amazon.

On Monday, Yousafzai's interview with Diane Sawyer aired on ABC, and in the United Kingdom the BBC Panorama broadcast a feature about her. On Tuesday, she sat down with Jon Stewart on the Daily Show and left the loquacious host speechless.

On Friday, Yousafzai's set to meet the Queen and find out if she won the Nobel Peace Prize. It doesn't stop there: this Saturday, she'll speak at the University of Edinburgh at the inaugural meeting of the Global Citizens Commission. Back in New York on Sunday, she'll sit down with Christiane Amanpour in front of a town-hall audience for a live interview and broadcast.

BRB, going to go do some relaxing yoga on her behalf.