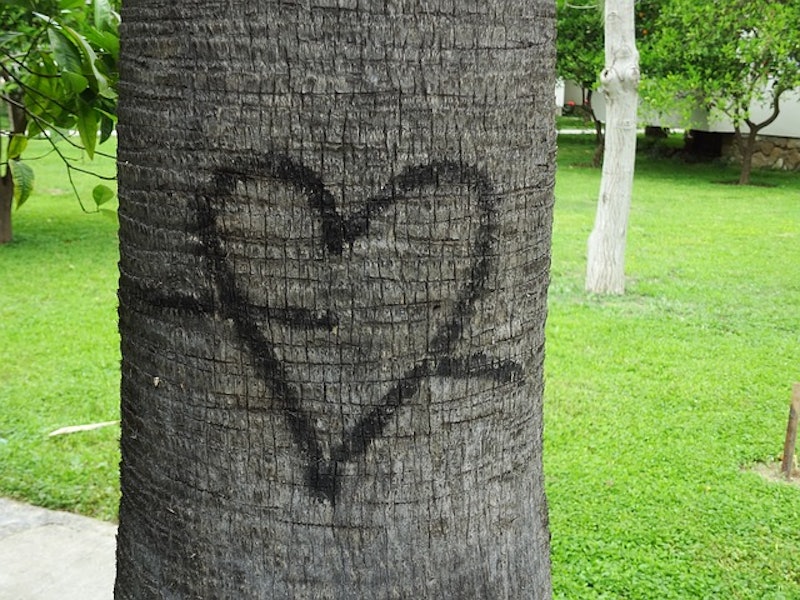 My mother hated the kind of women who needed a man around, and so I grew up not to be that kind of woman. I’m stubbornly self-directed and self-reliant. But damn if I don’t really like being in relationships. Maybe a little too much. I’ve spent scant time single in adulthood, so far — a situation I’ve long considered more circumstantial than self-chosen. But my latest romantic entanglement was so absurd, reckless and ill-advised that it’s made me rethink my agency in all this love-mongering. Might as well face it, honey. When you’re going gaga after just three weeks: You might be addicted to love.

Before this, my most recent relationship story might have been titled: “How to drag a breakup out for more than a year.” Finally, last month, we managed: THE END, all in capitals. I left what were once my cat, my home and my man behind in Indiana and came back to my hometown to see family, stay single and lick my wounds.

“I’ll be so devastated when I see you’ve started dating,” I told my ex as I left that early-September Saturday, through torrential tears that had been flowing all morning. “I can’t even imagine having feelings for anyone else anytime soon.”

This lack of imagination lasted approximately three days. The very first night after I left, I sent a text message to an acquaintance, Jake, whom I barely knew. Not to my BFF. Not to my sister. Not to my cousin down the street. Nope. I reached out to someone with whom I’d exchanged no more than a few dozen previous texts and a handful of retweets.

The thing about Jake is that I knew he was sad and newly-single, too. That was ostensibly why this made sense. I also knew he was crazy, the kind of crazy that sometimes results in hospitalizations and 12 step programs. By virtue of all this crazy/sadness, I figured he wouldn’t judge my current crazy/sadness.

Also: I thought he was cute.

Also: He lived across the country.

This long-distance was the saving grace, I told myself. There was no chance of romantic escalation. This was not an attempted rebound relationship — just a little hit of romance to ease my transition into being single. An emotional bandaid. I could manage. I could totally manage.

I could not manage. Immediately, we were texting every day and sending each other photos. With face-to-face contact impossible, we Facetimed (my first time). We talked on the phone at night, before bed, and then during the day too, and then two or three times per day. One morning about week in, Jake sent me three short video missives in a row, and from then on, voice memos and video selfies became another part of our repertoire.

“It’s weird, because part of me is like, oh, you can’t get in too deep, being so geographically separated,” said a friend when I told her about it. “But on the other hand, I’ve been involved in heavy, heavy emotional affairs before and they can be super-gripping,.”

It was all I thought about. I checked his blog and social media accounts with as much regularity as I checked my own. “Text me as soon as you wake up in the morning,” he’d say. “I like waking up to seeing texts from you.” I did. And though I didn’t answer every time he called, I always called back soon.

By two weeks in, Jake told me he was “falling in love” with me. When I told him he was silly — “you’re just bored and we both know it” — he chastised me for being patronizing and dismissive. This was quickly the new fact of our relationship as such: He was in love with me and wanted to tell me about it. Frequently. I simultaneously wanted to hear it more than anything and felt increasingly uncomfortable about it. I was not supposed to be doing this right now.

It was the same way with the calls and texts. I was beginning to get jumpy every time I heard my phone ding or ring. My heart would start beating a little faster, my stomach feeling a little queasy. It was either the proverbial butterflies or panic. Or both. Both is probably right.

I told my sister about the situation. “Well when he says things that make you uncomfortable, how do you react?” she asked. I told her I glossed over it and tried to change the subject. She sighed. “You know, most people would either directly address it or stop talking to that person,” she said. Subtext: Normal people don’t just go around thinking, ‘Oh, well, the crazy person across the country who I’ve been bizarro sexting is now sending me love videos. That’ll probably just work out fine.”

The problem is: I was falling in something with him too. Not love, exactly, but infatuation, tenderness, desire and a burgeoning want to possess that feels a lot like it. Crush. Obsession. Crutch. He sure provided a wonderful, wonderful distraction from my issues. I hardly thought about my recent ex at all.

Instead: I answered questions like “Are my kids a problem?” and “Are you texting with other men?” We talked about how and when we could meet. It was like we were part of a contest to see how quickly we could raise the emotional stakes. Jake brought out all my worst romantic tendencies, my ability to fall quick, hard and with frightening single-mindedness. All the things I normally suppress, fight off and hide, he encouraged and amplified back at me.

I still realized this affair was unrealistic — but I allowed space for cognitive dissonance. Probably we would tire of it before it came to anything. And yet maybe ….

Three weeks in, Jake called me to say he was getting back together with his estranged ex. This was a possibility I hadn’t considered, and the news hit me like a stomach punch.

The next day, my phone was so quiet I kept picking it up and checking the volume. I pouted and pined and moped, then pouted, pined and moped some more. In between, I tried to figure out what I was actually sad about: Jake himself? Being rejected? The loss of attention? All of these were somewhat disheartening, but the worst part was coming down off the lovers' high. And I realized that’s what I’m addicted to with new entanglements: The intensity. The feelings of intrigue. The way ignoring everything else in the world but this potential feels temporarily totally justified. The escape.

The danger never lied in whether this fantasy relationship would go anywhere (either it would or it wouldn’t, and in this case it wouldn’t). It was the fact that I’d been using it like a tourniquet. I had not taken a damn step toward processing my emotions about my ex and other calamities. I’d just buried or transferred them. Now here they were, bubbling up again with a new loss to throw into the mix, too.

So maybe all this has been a long way of saying rebound romances aren’t terribly healthy. I’ve spent the past week “detoxing” from Jake and reminding myself what I came home to do: Reflect, recuperate and re-imagine my life without my ex. There’s no room for any of that when you’re already reaching out for the next thing, the next person, and no matter how bright and shiny they are it's not really worth it. Staying single for a while might not be terribly interesting, but I think it’s pretty vital to self-care. Wish me luck?