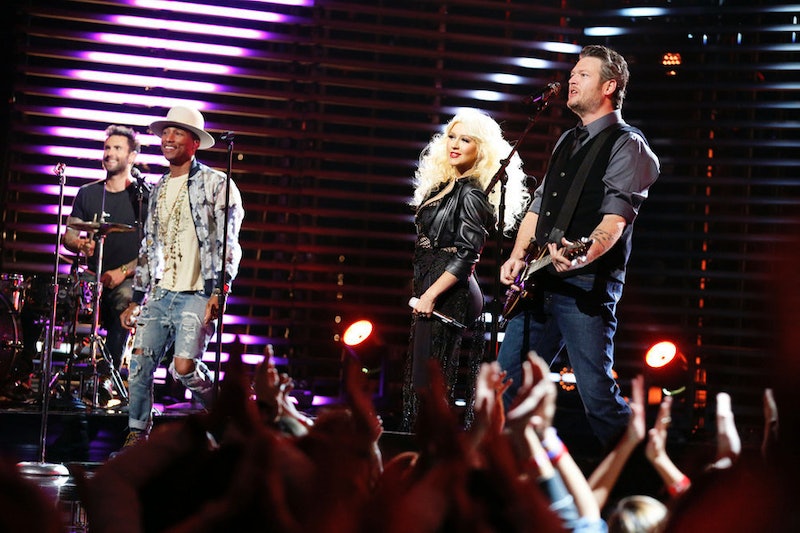 Between the artists' Blind Auditions, the coaches' Steals and the audience's Voice Saves, the founders of NBC's The Voice created a flawless system that is unlike any other TV-reality competition series. The highly anticipated eighth season of the singing competition that's created a platform for popular recording artists like Craig Wayne Boyd, Christina Grimmie and Danielle Bradbery is finally underway. And The Voice will find its Season 8 winner in just 26 (or 27) episodes. Yes, that is technically a lot of TV to keep up with (a TV drama generally only sees 22 episodes over a full Fall through Spring season). But you can do it, Voice fans.

Competitions typically eliminate hopeful talents — singing, cooking, dancing, designing — one by one until there's a last man standing. But the 20-something episodes of The Voice play a game of a whole different kind. Four celebrity coaches get to hand pick their artists, steal artists back once another coach lets them go and work with them one-on-one until they are the best they can be. After that, America can vote to save their favorites through Twitter during live eliminations. You think anyone could do all that in a reasonable mid-season number of episodes? Hell no. Fifteen episodes just aren't going to cut it.

Plus, all this complication is why the show is so wildly popular; it has four distinct phases that ensure each hopeful artist has every chance they deserve to advance. Here's why you shouldn't skip out on any of The Voice's numerous episodes; though the road is long, the journey is totally worth it.

The Heart-Warming Stories Behind the Blind Auditions

Not everyone comes in with a sob story, but it doesn't make the chair turns any less goose bump-enducing. The Voice is different from any other TV competition because when an artist gets chosen, they leave knowing it was based solely on their talent. So many times we see these shows where the judges need to see the "whole package" — and once this one gets to the live shows, of course that will eventually play a part. But the blinds prove that true artistry comes in all shapes and sizes and you can't help the chills that consume your body every time a coach takes a chance on one.

The Harmonies That Create the Magic of the Battle Rounds

The Battle Rounds are the performances we end up watching overhand over on YouTube after they air. The solo rounds are great, but there's nothing like the vocal sword fight between two talented hopefuls. Between the four superstar coaches and their celebrity mentors, some crazy-memorable performances have been born and this season shouldn't be any different.

The Breakout Performances You Didn't Expect During Knockouts

Some of these artists play it safe during blinds, or get through battles on sheer faith from their coach. But the Knockout Round is the one that separates the safe from the stars. Once you're at the Knockouts, you know you have only one chance to show your coach exactly the kind of artist you want to be and how hard you're willing to fight for it. Knockouts are where your favorites are born.

The Artist-Coach Bonds That Form During Lives

Last season's winner, Craig Wayne Boyd, was the underdog until he made it to the live playoffs. And I think he owes a major part of his success to Blake. I'm a huge believer in a perfectly matched artist-coach pairing being the recipe for success on the show. Not only does it help the artist tremendously when the coach understand's what his or her goal is, but having an on-screen connection like Craig and Blake had also gets the fans on board and voting.

The Voice Blind Auditions are already underway for Season 8, so break out the tissues and prepare for some unforgettable match ups.

More like this
Every Season Of 'Love Island' Ranked Best To Worst
By Alice Broster, Frances Stewart and Sophie McEvoy
Here's Everyone Who Will Be Competing In 'Survivor' Season 44
By Brad Witter
Zach Addressed His "Boring Bachelor Energy" After His Group Date With Latto
By Grace Wehniainen
Megan Mullally & Nick Offerman’s Relationship Includes Several Collaborations
By Caitlin Gallagher and Brad Witter
Get Even More From Bustle — Sign Up For The Newsletter
From hair trends to relationship advice, our daily newsletter has everything you need to sound like a person who’s on TikTok, even if you aren’t.