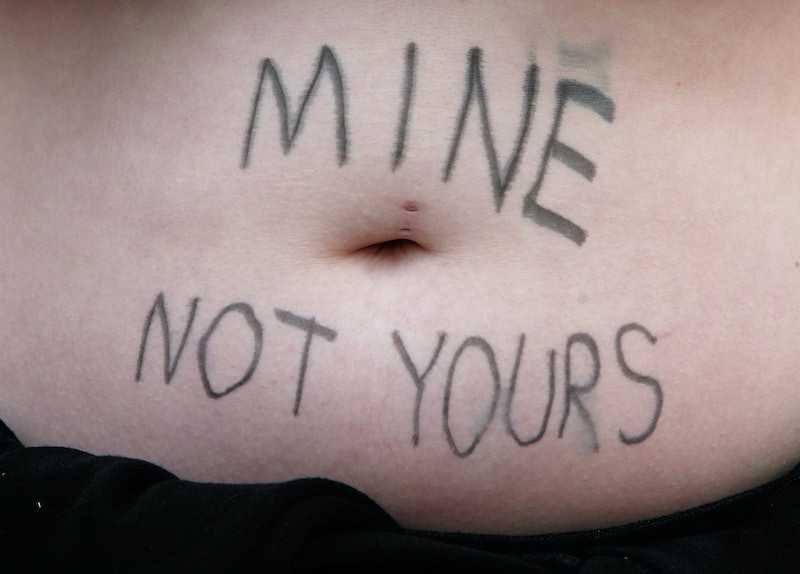 As usual, California is on the frontier. On Wednesday, Gov. Jerry Brown signed two bills into law that expand access to abortion — the only pro-choice legislation passed in America this year. Assembly Bill 154 addresses the shortage of abortion providers in California, particularly in rural areas of the state. The new law will allow non-physicians, like nurse practitioners or physician's assistants, to perform vacuum aspiration abortions for women who are in their first trimester after completing a training course.

The second law, AB 980, will repeal some sections of an existing law that seeks to place more stringent regulations on health care clinics that perform abortions than on clinics that choose not to.

The passage of the two new laws is a huge victory for those who support an availability of all options when it comes to healthcare for women.

"AB 154 will ensure that no woman has to travel excessively long distances or wait for long periods in order to obtain an early abortion," said Assemblywoman Toni Atkins. "Timely access to reproductive health services is critical to women's health."

"California is moving in a different direction than the rest of the country. So far this year we have seen 68 abortion restrictions become law, and California is the only state to make real progress to protect abortion rights," Elizabeth Nash, state issues manager for the Guttmacher Institute, a reproductive-rights research group told the Daily Democrat.

But of course, not everyone is pleased about Gov. Brown's decision. Wynette Sills, executive director of the Coalition for Women and Children accused Brown of putting "the profits of the abortion industry above the health and well-being of women and children."

National Right to Life Committee's Western Director Brian Johnston criticized AB 154 saying, "What this is doing is creating a whole new pool of abortionists. It's surgery by people who are not surgeons."

A study by UC San Francisco looked at 800,000 abortions performed by physicians and found that the rate of complications was about the same as when abortions were performed by doctors.

While Gov. Brown's decisions to approve these two new pieces of abortion legislation have gotten the most attention, they aren't the only decisions about Californian's health that were made on Wednesday. Brown also approved a measure capping the cost of medication for cancer patients, and another measure that would increase the number of people on the state's food stamp program.