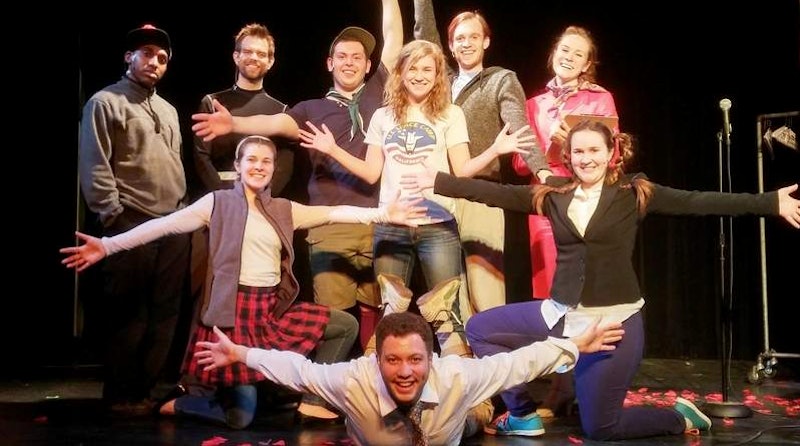 A funny thing happens when you're a dorky theater kid in school: Eventually you grow up and become a dorky theater adult. Fortunately, there is a breeding ground for humans like us, and it's called community theater. If you have ever been involved in community theater, you know that it is less of a hobby and more of a religion, or even a full-blown drug addiction. It is because of community theater that I have racked up thousands of miles on my car in the past few years, pulled countless all-nighters, and am now currently spending my Friday and Saturday nights crying onstage with a side ponytail in a pair of pink overalls—and I would not trade a single second of it for the world.

Professional theater sounds great, but it's community theater where the gloves come off and everybody feels just fine being their ordinary and ridiculous selves. Do you know what's messed up? I look forward to driving an hour in death-defying traffic just to hang out with the other nerds I'm in shows with, and no matter how many shows I do, that compulsion never goes away. For all the similarly hardcore theater geeks who are in this for life, you'll recognize the signs when you've been playing the community theater game perhaps a bit too long:

You use jazz hands ironically to land 50% of your jokes

In fact, you use them so often that it has gotten decidedly un-ironic and your loved ones are hoping that you'll seek professional help.

You have no age appropriate friends

My friend group ranges in age from 5 to 77 years old. When you actually get cast in a show with someone who was born in the same generation as you, it is the most confusing and amazing thing that ever happens to you (and obviously a cause for drinking after shows with reckless abandon).

Somewhere on your resume it says you "move well"

The oldest trick in the book. This is the only way people with two left feet have survived in this grueling, dance-intensive world.

Sure, everybody hears about the few times a "Spider-Man: Turn Off The Dark" actor almost bit it on Broadway, but nobody ever hears about the GIGANTIC SET PIECES that narrowly miss squishing the rest of us nationwide. Try as we may, our structural integrity is not always spot-on. Community theater is not for the faint of heart.

You lack any concept of personal space

Literally as early as a first audition you're expected to grab people's faces and by the time a show is opening, you've probably slept on top of each of your cast mates after an exhausting day at least once. In the current show I'm in, the girls have been walking around and casually flicking each other's boobs and saying "SCOOP DUNK." WE HAVE NO BOUNDARIES TO SPEAK OF.

You'll pretty much get naked any time, anywhere

Body shame? Ain't nobody got time for that. Between quick changes backstage and the fact that no community theater salary can afford dressing rooms, you're gettin' nekkid in front of your cast mates all the time, which eventually translates to you not giving a crap what other sane, non-theater people think of naked you either. Sorry that I'm not sorry, everyone in the gym locker room.

You know pretty much everyone you're auditioning against

If you stay in community theater in an area long enough, auditions basically turn into party reunion times where the one kid who is new in town gets very confused about how you all know each other.

I still have the leotard with feathers stapled to the butt from a 2007 production of "Seussical" but I just can't shake the sense that someday I will need it. I don't know why we hoard old costumes like trophies, but such is life.

You don't even panic at the words "Hell Week" anymore

Once you've been in community theater long enough, you become like a dolphin, where one half of your brain sleeps at a time so that the other half can be in the 7-hour rehearsals that follow your 8-hour work days. Somehow, you are able to coast through the final week leading up to opening night.

If I ran into a community theater friend working their real human jobs in their real human lives, I don't even know what I would do or say to them. Thinking about it is upsetting. I don't like that we exist in some universe separate from the one we're all in together.

Pfft, you think all that boss projecting on stage happens by itself? By the time you've been in this game long enough, you know better than to be caught dead with a cough drop.

If someone coughs near you, you flinch like a bomb has gone off

"DON'T YOU UNDERSTAND I HAVE TO BE ON STAGE THIS WEEKEND?! COVER. YOUR. DAMN. MOUTH." We are the literal biggest divas about getting sick who ever walked the planet.

The night a show closes, we're like, "I'm SO tired, I'm never doing this again," and then the next day we're crying from our crippling loneliness. As an anti-social extrovert, I can attest to the weird way rehearsals fill all the voids of human interaction you need without feeling like it's a huge amount of effort to engage, and when that is taken away from you, even for a few weeks, it's the WORST. Thank god there are so many of us and we're all so collectively invested, because we'll just keep chugging along and making community theater happen until we're all dead.

More like this
The 19 Best Tweets & Memes About Bisexual Awareness Week
By Lexi Inks
The Spiritual Meaning Of Angel Number 000, Explained
By Kristine Fellizar
These 4 Zodiac Signs Will Be Extra Lucky In October
By Brittany Beringer
Here’s Why Sagittarians Should Pursue A Career In Academia
By Nina Kahn
Get Even More From Bustle — Sign Up For The Newsletter