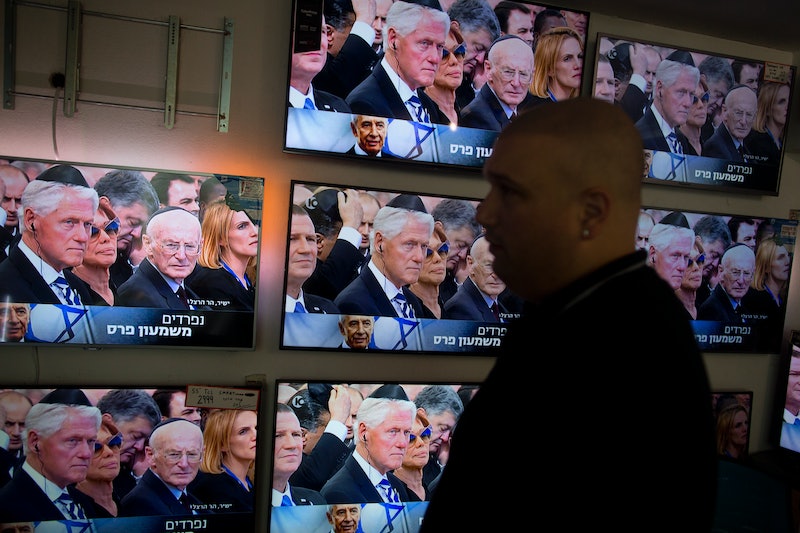 A 2011 study by Nielsen reports that the average American watches 34 hours and 39 minutes of television per week. THIRTY-FOUR HOURS. That is a whopping 20 percent of your week, only slightly less than the amount of time you spend sleeping and working (which each take up roughly a third of your time). Think of all the things you could accomplish instead! You could take over the world!

To be fair, while I’m about to start advocating giving up television here in a minute, I fully admit that I’m guilty of watching too much TV, too. I’m rather ashamed to confess that, most nights, my husband and I eat dinner in front of the television, TV trays propped on our knees. Seriously, I think we’ve only used our dining furniture twice in the last two years. So the following reasons to give up the boob tube are for me as much as anyone else; it wasn’t until I started writing this post that I realized how detrimental TV can be to both one’s social life and health. Give this list a read and take a minute to think about your own TV habits: Is your DVR ruling your life? Then maybe its time to take a step back. If going cold turkey seems like too drastic a step, maybe commit to having no TV on, say, Tuesdays and Thursdays, or turning it off on the weekends. Every little bit helps, right?

If you’re not relying on the television to help you while away your post-work hours, you’ll be more likely to go to the effort of hanging out with friends. You’ll discover that, although Rachel and Monica and Pheobe are awesome, nothing is better than the real thing.

A 2013 study from the Netherlands found that when people eat while distracted, they require higher levels of saltiness and sweetness to satisfy them, as opposed to when they are concentrating on their food. That means that when you eat in front of the tube, you may be consuming more than you actually need, simply because your food tastes bland to you. Furthermore, a study from the University of Liverpool and the University of Birmingham recently found that eating while distracted also leads people to consume more during meals later in the day—by a startling 25 percent!

Television is expensive. By getting rid of TV, you won’t have to give money to the cable company, and you’ll even save a little on electricity. You can use that extra cash for drinks with friends (See item #1).

4. You’ll save your sperm (if you are a sperm-having person)

A 2013 study from the Harvard School of Public Health found that guys who watch more than 20 hours of TV a week had a whopping 44 percent lower sperm count than those who go TV-free. YIKES.

If you don’t have the easy option of turning on the TV whenever you’re bored, you’re more likely to pick up a book now and then. Reading is good for you: studies have shown that reading for only six minutes can reduce stress by 68 percent.

6. You’ll have a better outlook on life

A lot of what we watch on TV presents a negative view of the state of humanity. Reality television, particularly, invites us to get lost watching attention-hungry people be horrible to each other. Has anyone ever gotten through a Real Housewives marathon and thought, “I feel good about the world”? Putting the TV remote down may help you to have a brighter outlook on the world around you.

TV is bad for sleep for a couple of reasons. According to the National Sleep Foundation, our brains are programmed to respond to changes in light; When it’s light outside, we can wake up, and when it’s dark, we can sleep. The light emitted from electronic devices can disrupt normal light rhythms and keep us awake when we’re supposed to be sleeping. Electronic devices can also simply be over-stimulating at night, revving us up when we should be winding down. (Televisions aren’t the only bad culprits here: all electronic devices have been shown to cause sleeplessness. So put your phone and iPad away, and read a book while you drift off.)

8. You won’t be watching commercials

We are constantly surrounded by advertisements—on billboards, in subway stations, on the internet, on phone apps. Cutting out TV won’t make your life ad-free, but it will eliminate a major source of commercials and product pushing. Seeing fewer ads may lead you to spend less and be happier with the stuff you’ve got.

Eyestrain is often caused by staring at bright objects for long periods of time (especially in otherwise dark spaces). Many of us can’t avoid staring at our glowing computer screens all day due to work obligations, but you can give your eyes a rest by laying off the TV.

An analysis published in the Journal of the American Medical Association in 2011 found that TV is generally terrible for us: Watching television increases our risk of heart disease and type 2 diabetes. According to CNN , “for every additional three hours the study participants spent in front of the TV, their risk of dying from any cause during the respective studies jumped 13%, on average.” The main issue seems to be that TV promotes a sedentary lifestyle and discourages healthier behaviors, like exercising. So turn off the tube, and go take a walk!

More like this
This Psychological Effect Might Be Keeping You From Hitting Your Goals
By Lexi Inks
The 5 Best SLS-Free Toothpastes, According To Dentists
By Amy Biggart and Danielle Calma
The 7 Best White Face Paints For Halloween In 2022
By Maria Cassano
15 Halloween Costumes Inspired By TikTok Trends
By Emma Carey
Get Even More From Bustle — Sign Up For The Newsletter