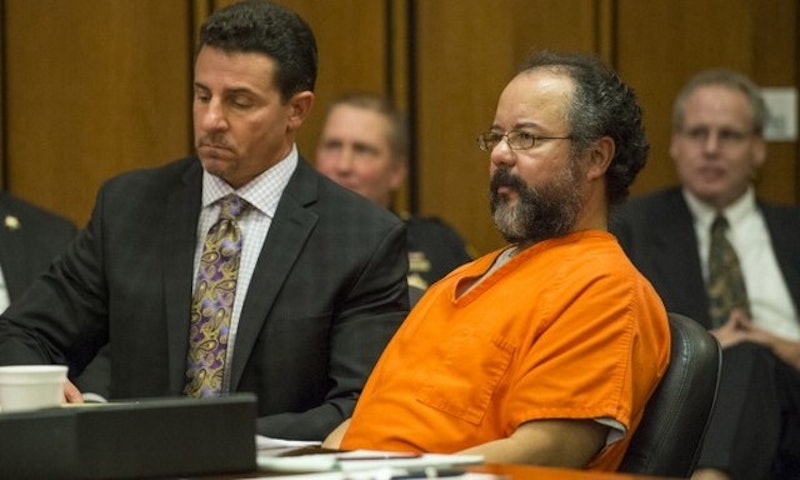 New details emerging Thursday in the death of Ariel Castro suggest that the convicted kidnapper and rapist may have died from auto-erotic asphyxiation, not suicide. Castro was found hanging from a bed sheet in his prison cell one month into a life sentence. According to new reports from the Ohio Department of Rehabilitation and Correction, Castro had his pants around his ankles and a bible open when he was found dead, around 9:18 p.m. on September 3.

“These facts, however, were relayed to the Ohio State Patrol for consideration of the possibility of auto-erotic asphyxiation,” the report says. “No other immediate observations about the scene led to conclusions about the motivation for the self-inflicted death.”

Originally, Castro's death was ruled a suicide. But Castro was not on suicide watch, and according to officials, he showed no suicidal tendencies that were a cause for alarm.

The report also said that Castro had left no suicide note and had pictures of his family out.

During his trial, Castro had claimed that he was a sex-addict saying, "These people are trying to paint me as a monster," he said. "I'm not a monster. I'm sick."

Additional details suggest that prison guards falsified logs that were meant to track Castro's observation. According to officials, guards may have skipped eight checks on the prisoner on the afternoon and evening of Sep. 3. It is also unclear if he was ever shown the suicide prevention video at the facility where he was held. The report also suggests that the ambulance contacted to respond to Castro's hanging was significantly slow in its response time. But the report also acknowledges that a faster arrival would not have likely changed the outcome.

Castro was convicted of kidnapping and imprisoning three Cleveland women, and repeatedly raping and abusing them for more than a decade. Castro also fathered a child with one of his victims.