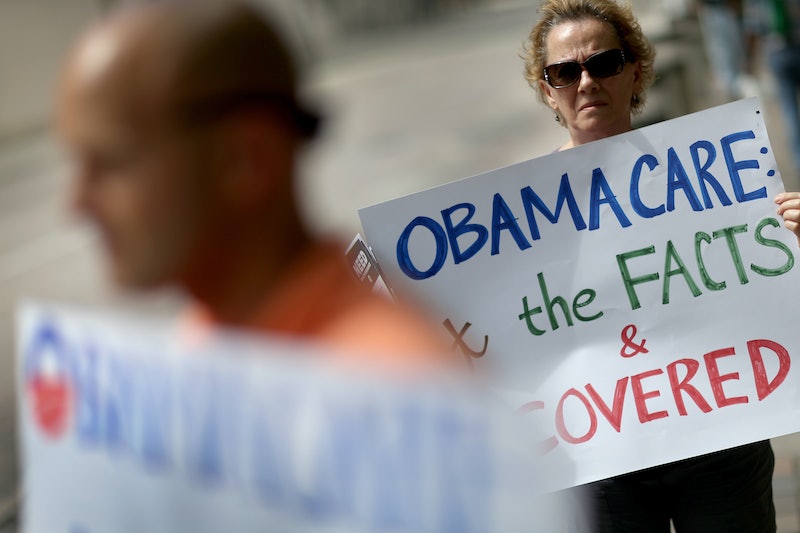 Millennials will be opting out of Obamacare "in droves", Cathy Reisenwitz wrote in a Forbes op-ed this week. This piqued my interest, but the rest of the piece turns out to be more an argument for why Reisenwitz thinks Gen Y should opt out rather than why or if we are. So ... are we?

ObamaCare forces people who can scarcely afford the extra cost to subsidize care for people who absolutely can afford to pay for their own health services.

In the exchanges, a young person will have to pay an estimated $250 per month for basic insurance. Again, this cost is so high because these premiums are expected to pay for older people’s healthcare costs. These costs now include covering a plethora of expensive drugs, services and procedures thanks to ObamaCare’s requirements for insurance plans.

Another math lesson seems to be needed here: Insurance is only a good deal when it actually works like insurance. Using insurance to pay for routine care and predictable healthcare needs makes it no longer insurance, but cost pooling.

Whether a significant portion of Millennials will opt-out is a question a lot of people are asking with no clear answers. People under 26 can stay on parents' health insurance plans (as many already are already doing). If we look to current Gen Y health insurance behavior: Among young adults offered coverage by an employer, only half opt to take their company plan (compared with 70 percent of workers over age 40), according to The Fiscal Times .

Young adults make up a disproportionate share of the nation's 50 million uninsured. Getting them to sign up for insurance coverage will be a major focus of the government this fall during the roll-out of the Affordable Care Act, or ACA, also known as Obamacare.

Beginning in 2014, people who don't get coverage through state or federal health insurance exchanges will be fined. But the fine could be as little as $95, or less than the cost of one-month of high-deductible health care coverage. Tim Clifford, the president of employee benefits group ADP, told the Fiscal Times:

"A $95 penalty, which isn't even due this fall but at tax time — and it's kind of invisible at that point — is probably not enough to change behavior."

A group called Generation Opportunity has been campaigning for young adults to opt out of Obamacare. But the group — best known right now for its terrifying and rapey Uncle Sam ad — is not quite the grassroots expression of Gen Y sentiment it angles at but an advocacy group funded by the Koch Foundation. GenOpp told the Atlantic Wire it was still "working on" finding the data to back up its assertions about the cost/benefits for young people.