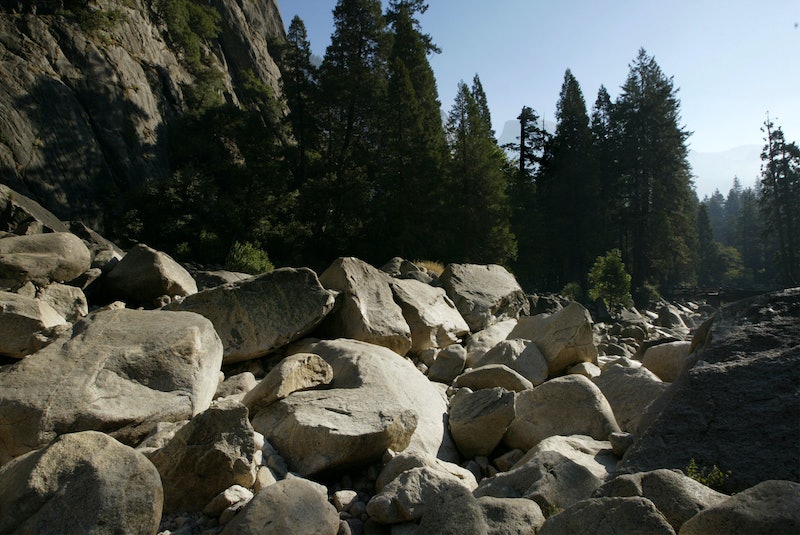 As of this morning, it looks like Congress is slowwwwly baby-stepping towards a compromise that could put a stop to the government shutdown, though there is still no official end in sight. Meanwhile, many worry that the lack of Center for Disease Control workers might cause a widespread health crisis, and government employees all over the country are still anxiously waiting for the day they can return to their day jobs (but hey, at least they get free vibrators).

Another side effect of the stalemate? If you filed a time-off request for October, your travel plans might bump into a few unforeseen hurdles.

If you lost your passport or have been taking your sweet time to apply for one, your upcoming international vacay might be kaput unless you get on it...like, now. The State Department will continue to process requests, but only until funding runs out. During the last government shutdown, hundreds of thousands of passport apps went unprocessed.

Campers and tourists in national parks like Grand Teton and Yosemite have been told to quit admiring the fall foliage and GTFO, but that hasn’t stopped fence-hopping rebels from breaking into Zion National Park and the Grand Canyon as an (illegal) act of civil disobedience. The good news? Obama announced today that states can choose to use their own funding to reopen some of the closed parks.

3. LONGER LINES AT THE AIRPORT? MAYBE.

The government deems TSA personnel “essential” so most can still go to work...they’re just not all getting paid. So if the security line lags or the agent forces you to throw away a liquid eye cream (“BUT IT WAS 65 DOLLARS!”), hold off on sassing them out. After all, they probably don’t want to be patting you down, either.

The East Coast sees a big tourism boom every fall, and everything from the Gettysburg battlefield to the Salem, Massachusetts visitors center has been shut down. The Feds have barred tourists from pretty much everything in DC (the Capitol, the monuments, etc.), but that hasn’t stopped this guy from mowing the lawn of the Lincoln Memorial.

Along with national museums like the Smithsonian, many zoos are on lockdown and even the National Zoo’s live video streams are MIA. Maybe Congress members should take a look at the depressing spinning wheel of the panda cam and reevaluate their recent choices.

More like this
How To Follow The New Royal Family Social Media Accounts
By Sam Ramsden
Dyson Is Dropping Futuristic, Air-Purifying Headphones
By Rachel Lapidos
Here’s Your Daily Horoscope For December 9, 2022
By Mecca Woods
Nick Carter Responds To Allegation Of Raping A 17-Year-Old On A Tour Bus In 2001
By Jake Viswanath
Get Even More From Bustle — Sign Up For The Newsletter