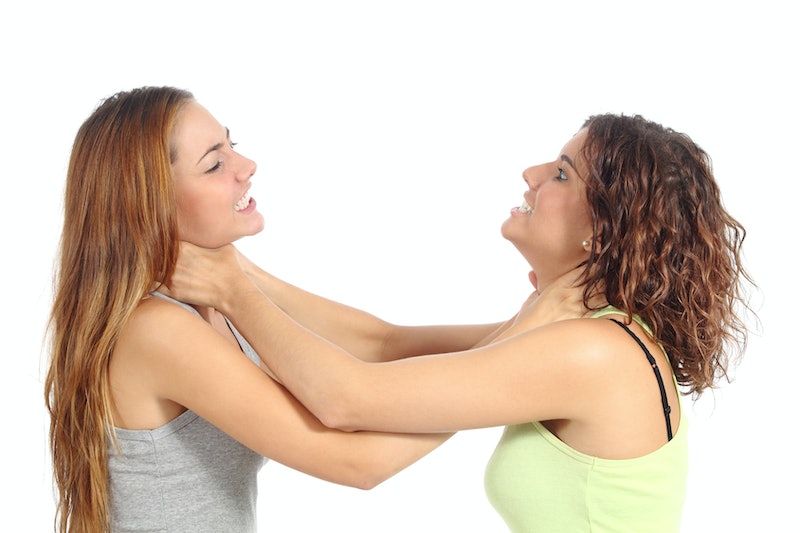 Feminism as a movement is widely misunderstood. Only 23% of women, according to a Huffington Post poll, identify as “feminist,” but most support the idea that “men and women should be social, political and economic equals.” The latter, of course, being the textbook definition of feminism.

Aside from the general public, this confusion has also created some discord in feminist circles. As the second, third, and fourth waves of feminism collide with the real, intersectional world, women’s choices are often under fire — mostly from other women who identify as feminist. It’s no shock that women can do and say decidedly anti-feminist things (anyone remember Phyllis Schlafly?), but it is somewhat surprising when it comes from those who identify themselves as part of the feminist movement.

These 3 seemingly-feminist-but-totally-not actions are pretty common, even in the most niche feminist circles.

1. Not respecting the work of homemakers and stay-at-home moms.

Stay-at-home moms and homemakers used to get a lot of grief in feminist circles. These ideas have their roots in second-wave feminism, when career opportunities for women were extremely limited. In academic feminist circles, much of the criticism of women who choose raising their children full-time over continuing their careers has largely dissipated, but there is still some very real-world disdain for SAHMs.

I get it — when you’re out hustling to the train at 6 a.m. and finishing big projects for clients, it can be grating to hear about your stay-at-home mom friends’ complain about dirty diapers and doing dishes. This doesn’t mean, though, that the work they’re doing is any less important than an advertising job or academic research. Feminism is about empowering women to make their own choices, and it’s pretty anti-feminist to assume that all SAHMs and homemakers have made their choice because it suits their husbands. A number of very feminist women in this country have chosen to stay at home and raise children because it is exactly what they want to be doing with their lives.

It’s October, so much of your favorite consumer crap has turned pink for Breast Cancer Awareness Month. Everything from football players’ shoes to spatulas is now available in a bubblegum hue, most offering to donate a “percentage of proceeds” to a breast cancer charity. The reality, though, is that most of these products are meant to create profits for companies, not benefit people with breast cancer. It’s likely that only a few cents from your purchase is actually going to benefit breast cancer research or treatment, so pass on the pink shit and give money directly to the Breast Cancer Research Foundation or the National Breast Cancer Foundation.

“Pinkwashing,” or using breast cancer symbols to make profit, is a very real problem. In an effort to reach out to female football fans, the National Football League created an entire line of pink products in an effort to support breast cancer research. The reality, though, is that only $3.54 of every $100 in product sales actually goes toward breast cancer research, while the NFL keeps $45. Since 2009, the League has only donated “more than $3 million,” which seems pretty low considering that they pulled in over $9.5 billion in revenue in 2011.

Everyone has an opinion about the personal choices that women make in their lives. Recent debates have included whether women should change their names after marrying, breastfeed in public, and wear headscarves. These choices, whether rooted in patriarchy or not, are now solely owned by women. It’s perfectly acceptable to say that wearing a hijab isn’t for you, or that you’d never get married, but it isn’t particularly feminist to ridicule women who want to make those choices.

For me, as a feminist, it’s important to remember that my life comes with a certain set of privileges and circumstances. Keeping that in mind has made it much easier for me to approach the choices of my friends and family with respect and understanding. You don’t always have to agree with a choice, but you do have to respect it. For example, based on what I’ve learned in my feminist education, I’ve made the decision to never get married. This decision doesn’t mean that I win some kind of “Best Feminist” award, and it certainly doesn’t mean that I can call other women bad feminists because they have husbands.

Feminism isn’t this rigid, unchanging force that has a specific set of rules, and there’s no right way to “do feminism.” The ultimate goals of feminism are to fight for equality and support women in their choices, even (and I would say especially) when we don’t agree.