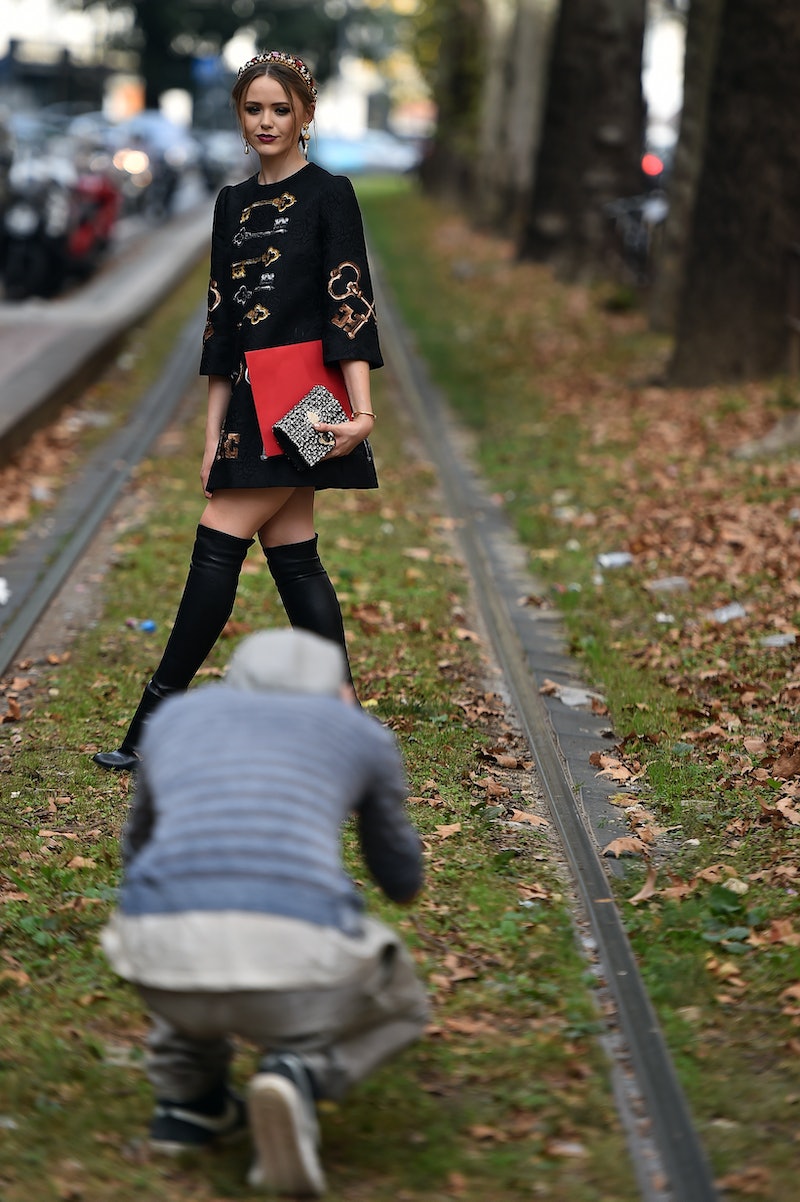 Fashion blogs are all over the Internet, and fashionistas have turned their blogs into a full-time job. But how do fashion bloggers make money off those pretty pictures of DIY makeup products, tutorials, and brand new clothes? It sounds like a dream come true, but there's a lot of work that goes into all those elegantly crafted Instagrams.

In 1997, editor of Robot Wisdom, Jorn Barger made up a word for "logging into the web and surfing." He called it "weblog," and the term was quickly picked up almost as quickly as computers. Now, nearly two decades later, weblog has adapted into less broad terms like "wasting time on the internet" or "fashion/food/YouTube/DIY/gaming blog." Names like Bryanboy, Michele Phan, and Leandra Medine are almost as recognizable as movie stars. There is literally a blog for anything these days. Blogs are much more than a hobby now, though. Founders are actually turning their blogs into a full-time paying job, often with a full staff and office space.

Today, according to Kara Morrison, founder of Blogoola (a blog about... well, blogs), estimates that nearly 54.9 million blogs use sites like Wix and WordPress to curate their blogs. No one has to create a website from scratch using a bunch of numbers and symbols (otherwise known as code) anymore. These sites will literally let you choose a theme or design a website with the click and drag of a mouse.

In June of 2014, WWD reported that fashion bloggers salaries were increasing into the millions per year. Refinery29 just reported that The Blonde Salad brings in nearly $8 million a year. How are these hair gurus, SEO queens, tutorial-making, and all around fabulous people turning their once-hobby into an income? Easy. Endorsements and proposals and having a unique voice.

“There are so many great blogs out there now that the market is very saturated. So it’s key to find a way to stand out, whether that’s your unique writing voice and perspective, or your particularly strong outfits,” Kat Collings, senior editor of Who What Wear, told me in a recent interview.

Jamie Feldman of The Huffington Post writes that fashion bloggers are essentially "branding themselves." Feldman writes that bloggers aren't pretending to be journalists, but they're adopting a certain persona or trait that makes them stand out, then wanted by designers or brands to endorse their products on their blog. They'll also offer advertisements for a company or brand on the fashion blog.

"The main reason bloggers' — particularly personal style bloggers' — incomes have sky-rocketed is the development and growth of affiliate link programs. Affiliate links, for those of you who don't know, allow bloggers to make a commission off the products they recommend or feature," Hayley Phelan of Fashionista reports.

Affiliate links work with cookies. Once you click on a product featured on the blogging site, and you purchase a product from its home company website, that blogger gets paid. Not to mention freelance articles. Many fashion bloggers are getting asked to write for almost any publication (Nicolette Mason for Marie Claire is just one example).

In 2010, Emma Galloway started her food blog, My Darling Lemon Thyme after moving from New Zealand to Australia and finding out her two children were gluten-intolerant and lactose-intolerant. In an interview with Galloway, she told ,e that she has found some pros and cons to blogging and motherhood, and money has not always come easy to her. Galloway had to actually pitch her blog to advertisers, instead of them coming to her.

"I have a couple of sponsors who pay for ad space, but this barely even covers my costs associated with running a blog. I’ve also done the odd sponsored post, but this is not something I’m into doing regularly,” Galloway told me. “As much as it would be lovely to make a living off the blog, turning it into a commercial blog has just never been my goal."

Despite not claiming themselves as "journalists," bloggers are definitely changing the way fashion shows, style trends and even breaking beauty and fashion news is reported.

The Cut remembers a time when fashion editors and guests at NYFW were not allowed to pull out their phones during fashion shows. Front row attendees were asked not to lean forward, let alone move their feet an inch away from the legs of their chairs. Now we've got Instagrams letting us know what's happening every single second.

These changes aren't a bad thing, but The Cut reports that all insider secrets to how fashion weeks happen is, well, no longer a secret. And fashion editors, who were there before iPhones were acceptable on the runway have joined them. Fashion blogger Scott Schuman told The Cut that times are changing for fashion bloggers these days.

"The thing that was different for the first generation was [most of us] rarely put ourselves on our blogs. The newer generation is all about themselves. What can we get out of this? It’s much, much more about self-promotion. It’s me, me, me. Look at me. Aren’t I cool? Look at this bright, shiny world I’m portraying.” Schuman told The Cut.

Schuman went on to say that readers now want to believe what fashion bloggers have to say, not just understand that they're featuring products on their site is merely their paycheck. The bloggers revealed the inside world of fashion, and changed the setup of the whole game while they did it.

Indiana-based vlogger, Mark Miller, told me that it shouldn't be a b(v)loggers intent to start a blog based on money or the perks. Miller started his vlog his junior year of college as he was beginning the process of coming out.

"Once I was out, I wanted to give out. I wanted to make a video of how I came out, what my experience was. And after that video, I started getting comments and questions...” Miller says.

Regardless of the reasoning, in order to get any form of payment for having a fashion blog, it's important to have a beautiful site with beautiful imagery in words. Looking at blogs that have made it big (ManRepeller, The Blonde Salad, Keiko Lynn, etc) fashion blogging is no easy work. Although its founders lead a glamorous life jetting to fashion shows and meeting celebs and designers, the reality is they have a responsibility to curate a functioning and attractive-to-the-eye website, along with pictures. Their words have to make sense and be grammatically correct. Designers and beauty brands still have a reputation to uphold. Unfortunately (for me) they're not going to click on the first fashion blog they find, but trust a brand that gives off a reputable and all around functionally, pretty-vibe.

And getting there is not easy. Miller says bloggers will definitely go through a time of not having a plethora followers, and this period of "limbo," as he calls it, is where Miller sees a lot of bloggers disappear.

“A lot of people start putting their content out there and they don’t see the following (they) want to. And I think it will stop the majority of people,” Miller says. “People just need to stick through it.”

More like this
What Is Miles Teller’s Net Worth? The 'SNL' Host's Bank Account Is No Joke
By Meg Walters
'Survivor' Host Jeff Probst's Salary Per Season After 22 Years Is The Real Winner
By Hugh McIntyre
Where Is Former Bachelor Host Chris Harrison Now & What Is His Net Worth?
By Hugh McIntyre
The Biggest Runway Trends From Milan Fashion Week 2022
By Allie Fasanella
Get Even More From Bustle — Sign Up For The Newsletter