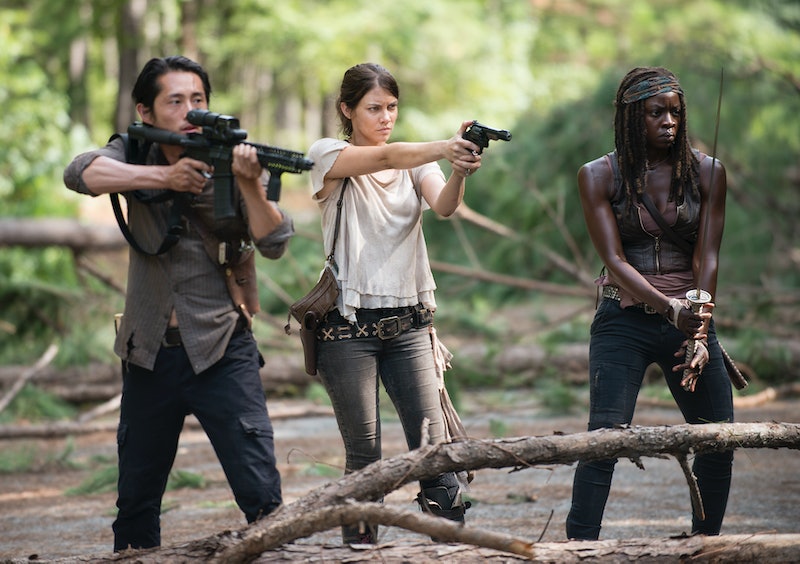 Panic ensued for The Walking Dead fans when a promo for last Sunday's episode briefly showed a scene of Glenn Rhee potentially getting chomped on by a walker. Things got worse right before they got better when the episode finally aired and Glenn found himself in a sea of walkers with no one but the unarmed Aaron at his side. But by some miracle, Glenn caught said walker at the last possible second and rescued Aaron, no harm done. But a part of me is still panicking that the episode was foreshadowing Glenn's death in The Walking Dead Season 5.

Following Glenn's almost-death, he decided to trust Aaron and Eric, but at what cost? Rick sees Glenn as the most loyal of the group, so for Glenn to risk the group's safety by convincing Rick to head to Alexandria must mean he has a good reason to trust these supposed saviors. The problem is, I can't help but think that Glenn's sudden outburst of faith is about to be his downfall. Tyreese's death was foreshadowed in a similar way, as were the deaths of Beth, Andrea, and Shane. I really hate to say it, but Glenn could be the next major character to bite the bullet.

What's even worse is that if the TV series follows the comics, Glenn's potential death is going to be anything but peaceful. According to the comics, Alexandria will mean some good things for Glenn and Maggie: Glenn will get a chance to use his skills as a supply runner and Maggie will find some peace after the emotional breakdown we see her having now. But we all know good things come with a price on TWD. In the comic series’ big 100th issue, which is during the Alexandria plotline, Glenn is beaten to death with a baseball bat wrapped in barbed wire by Negan, a villain we haven't seen on the TV series yet.

It's hard to tell if the show will follow this plotline. Of course, we should all watch knowing that every single character is at risk always. But also keep in mind that the show hasn't totally followed the comics thus far. If they had, Daryl wouldn't even exist and Andrea would still be alive — so there is some hope for Glenn. Just not a whole lot.

Believe it or not, we're already nearing the final episodes of Season 5 and a Walking Dead finale is pretty much nothing without a major death. AMC announced Wednesday that an extended 90-minute finale will find danger at the gates of Alexandria, where Rick and the group still feel like outsiders. And with the warning signs all there, 90 minutes in Alexandria cannot mean anything good for Glenn.

There’s always the chance that the show writers will throw us off by letting Glenn live or killing him in a different way, at a different time, but I would keep your eyes peeled. If they're waiting for the season finale, there is plenty of time for more foreshadow one way or the other. But if The Saviors who kill Glenn in the comics are in Alexandria, fans should start emotionally preparing.

More like this
Bill & Frank’s 'The Last Of Us' Episode Has Twitter Emotionally Wrecked
By Alyssa Lapid
This 'Gossip Girl' Wardrobe Error Has Gone Viral On TikTok
By Alyssa Lapid
'The Last Of Us' Has Officially Been Renewed For Season 2
By Darshita Goyal
Mollie Gallagher Has A Deeply Personal Reason For Taking Up Skating
By Maxine Harrison
Get Even More From Bustle — Sign Up For The Newsletter
From hair trends to relationship advice, our daily newsletter has everything you need to sound like a person who’s on TikTok, even if you aren’t.