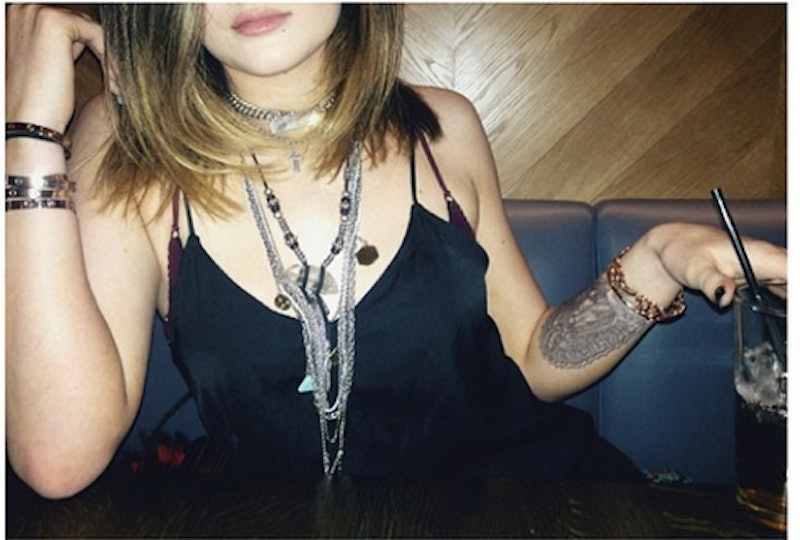 Kylie Jenner is probably one of the edgiest teenagers out there. She has a unique sense of a style, a constantly rotating set of hair colors, and in any case, she isn't afraid to make a statement. But does Kylie Jenner have any tattoos? After all, that'd be the best way to show off how ~different~ she is from the rest of her fam.

Unlike her super model sister Kendall, Kylie has a slightly less soft sense of style, opting for darker colors, sets of skull rings, ripped denim, etc. And it always, always works for her. In many ways, she's a fashion icon in and of herself, which is saying a lot given that it's probably quite easy to get lost in the mix of her whole, very famous family. But Jenner has a clear-cut, definite sense of style that makes her stand out and have her own brand of success within the Kardashian empire. And although you might have heard big sister Kim Kardashian speaking out negatively against tattoos, when it comes to Kylie Jenner, tattoos seem like they would fit, right? Even though you may be seen photos of Kylie with tattoos floating around the Internet, the truth is that none of them are actually real. Well, at least as far as we know right now, anyway.

Rumors of Kylie having real tattoos have been floating around for a couple years now because of a little thing called Sharpies. Kylie and Kendall have experimented with having different designs on various parts of their body and sharing the results on Instagram more than a few times now. First, there was the gun on Kylie's rib cage. Then, the antelope on her middle finger. And Kendall's HUGE skull design on her back. There's been a lot of "are they real or aren't they?" moments regarding the Jenners' Sharpie tats, but from what we can tell, those drawings are the closest thing Kylie (and Kendall) Jenner has ever had to a real tattoo. Maybe she's taking Kim's advice and avoiding the permanency of the real thing? Or maybe she's just hiding it really well. Either way, the Sharpie designs are apparently the closest thing that exists to Kylie (and Kendall) having tattoos — but some of them are pretty cool.

How could they bear to wash those works of art off?!

More like this
Kylie Jenner Goes Into Labor & Welcomes Her Baby On 'The Kardashians'
By Jake Viswanath
15 Hibiscus Tattoos That Bring Tropical Vibes To Your Body Art
By Paris Giles
Fermented Skin Care's Barrier-Boosting Benefits, Explained By Derms
By Audrey Noble
Everything You Need To Know About Ephemeral Tattoos
By El Hunt
Get Even More From Bustle — Sign Up For The Newsletter