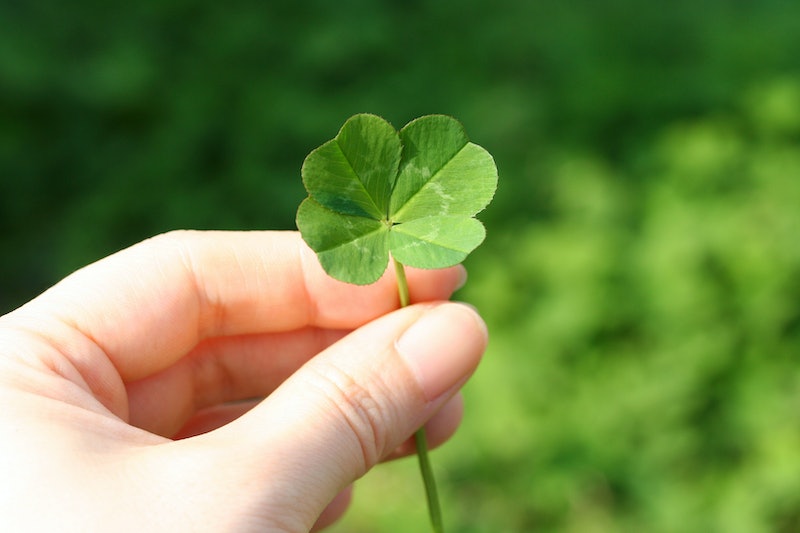 St. Patrick's Day is quickly approaching, which means there's never been a better time to whip out your shamrocks and other trusty good luck charms. Not that things aren't looking up right now. Winter has seemed endless this year, but we're almost out of the snow-covered woods. There are just a few weeks to go until warm spring bliss returns, and smiles come back to our hitherto freezing faces. But for the occasional day when it feels like life just took a steaming c-r-a-p in your purse, it helps to have some lucky charms on hand, if only to put your mind at ease.

Lucky charms are not hard to find, and no, I'm not talking about the cereal. (Those aren't hard to find either though, if you're craving a bowl of marshmallow goodness — probably aisle three of your local grocery store.) Believe it or not, actual lucky charms are everywhere. Depending on the origins or religious history, basically any tangible item can be considered good or bad luck. The original sources of said lucky charms are difficult to track since most of them were just rumors started hundreds of years ago, but whatevs. It's not going to stop us from carrying fake rabbit's foot keychains and avoiding walking underneath ladders. If you're looking to put some good odds in your favor on a consistent basis, here are the things you should always have around.

It was St. Patrick himself who explained that three of the four leaves represented the Holy Trinity: the Father, the Son, and the Holy Ghost. Many believe that the fourth leaf makes the shape into a cross, or could represent the grace of God.

2. Figs and Their Seeds

Fig seeds are a symbol of prosperity and fertility. So if you're looking for mo' money and mo' babies? Eat some figs.

A cricket in your house generally indicates that you will spend the following week slowly going insane from the incessant chirping. In Chinese culture though, cricket visitors are a sign of good fortune and wealth.

4. Horseshoes Above Your Door

Display a horseshoe with the ends pointing upward above the front door of your home as a symbol of protection and good luck. If the ends are pointing down, apparently the good luck will fall right out. So cradle that luck like a newborn baby, and keep the point up.

5. Tossing Salt Over Your Shoulder

Tossing salt over your left shoulder is a way to fend off evil omens and spirits. And if you pour it in a circle shape and stand inside of the circle, you won't get kidnapped by the Sanderson sisters on Halloween night. So good luck for two reasons.

According to some, people with red hair are generally bad luck. But if you rub the hair of a redhead, good luck will come your way. I know, it doesn't make any sense. But if caressing the locks of Prince Harry is lucky, then you kind of have to do it, right?

Known primarily as a good luck food on New Year's Eve, black-eyed peas are said to bring wealth. New Year's is over, but that doesn't mean you can't continue to eat them. Or at the very least, throw on an old Black Eyed Peas song and dance as hard as you can.

Yes, you read that right. Cakes are good luck. Ring-shaped cakes are a symbol of coming full circle, so.... I think it's time for a snack, amirite?

More like this
14 Last-Minute Halloween Costumes That Only Require A Flannel Shirt
By Kirsten Nunez
64 Genius Gift Ideas For Every Single Guy In Your Life
By Teresa Newsome, Mia Mercado and Brittany Leitner
12 Easy Halloween Costumes You Can Wear With A Denim Jacket
By Kirsten Nunez and Bustle Editors
How To Dress Up As A ‘Squid Game’ Character For Halloween
By Emma Carey
Get Even More From Bustle — Sign Up For The Newsletter