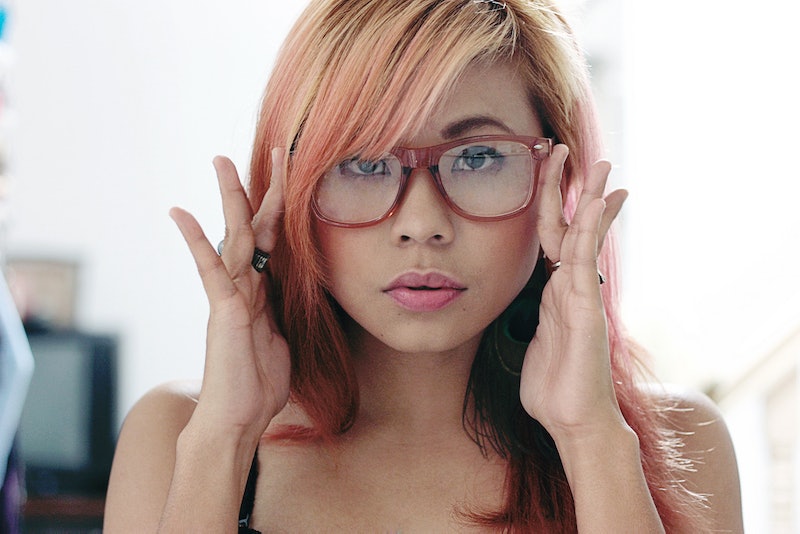 One time a friend of mine walked into an ice cream store, eyeballed all 32 flavors in the display case, looked up at the woman behind the counter and cheerfully said, "A scoop of mint chip and a scoop of rocky road, please." Like it was nothing. Like the decision was totally easy and thoughtless and certain, and she wasn't afraid that, in her haste, she had somehow tested fate. I, on the other hand, spent five full, excruciating minutes waffling back and forth between flavors before deciding, and even then probably had three to four mini existential crises while it was happening. Over ICE CREAM. The struggle in my perpetually overthinking brain is alarmingly real.

When you're an indecisive person, even stupid things like picking out the color of your scissors becomes a twenty minute episode in Target—and the bigger decisions are, of course, exponentially worse. If someone asks me where we should go to dinner, I basically resent them forever for putting such an impossible responsibility on me. Even though a lot of my friends think that my upcoming move to New York is super fun and spontaneous, the truth is I went back and forth on it for so many years that if Freud got a look into my thoughts, he'd probably run crying to the mother he resented so much. If you have ever been in the throes of indecision, you will relate to these thoughts all too well:

I swear, I have never actually gotten past the stage of thinking this in my head to the part where I physically put words on paper, because just the idea of pro-ing and con-ing gives me so much anxiety that my hands refuse to communicate with my brain. "I'M CUTTING YOU OFF," my brain says to them, in a dramatic sassy voice usually reserved for episodes of celebrity rehab shows.

Which is, inevitably followed within a nanosecond by:

"NOPE, NOPE, NOTHING IS RIGHT AND I HAVE NO GUTS TO LISTEN TO."

Oh, right, the reason we were in this mess in the first place.

This is a dangerous path to follow right here, because no matter what the decision is—career, love, personal, pizza toppings—you will inevitably use your worst case scenario skills to sabotage yourself. Ain't nobody better at worst case scenario-ing than an over-thinker. I'd say that it would help us survive the zombie apocalypse, but the truth is, we'd still be shredded for parts in the first five minutes deciding which shelter to run toward.

"What would *insert person you admire* do in my place?"

The problem is I don't have Jennifer Lawrence on speed dial, so I really don't know. The second problem is, even when you ask someone who has legitimate experience with the problem you're dealing with, you feel immediate relief, and then somehow go right back to overthinking everything all over again, because you're a PRO at this.

"STOP THINKING ABOUT IT."

Oh, if only. Over-thinkers are awfully optimistic about the prospect of shutting their brains down, but it's usually right about the time our heads hit the pillow at night that it stops listening to our commands and starts spiraling into the danger zone again. When you have any decision to make weighing on your mind, you won't get to sleep until you've panic-texted your mom, eaten whatever is within arm's reach, and bashed your face into your mattress several times in a row.

"What will everyone think if I do Choice A/Choice B?"

I'm a huge proponent of living your life and not giving a crap what other people think of you (which is why I have never once been embarrassed the times I have bent over and accidentally revealed my Tangled-themed underpants to the unsuspecting world), but at the same time, you can't help but let these thoughts leak into your head. Especially because, at this point, it's a thought-having free-for-all and there is pretty much no ground your head won't try to cover.

Time: the most important currency to any chronic over-thinker. It is, perhaps, more important to us than Chipotle. When someone gives you a few more days to put off a decision, it's like soaking into a nice warm hot tub of procrastination, and I can't think of a better feeling in the whole wide world.

"Am I making this choice for the right reasons?"

UGH, leave it to your brain to get all sentimental and thoughtful and shit. Just when you think you're getting in the clear and are finally ready to make a decision, for better or for worse, this pops out of the woodwork like a SURPRISE video game villain on the final level. Sometimes it is impossible to figure out if your intrinsic motivation to do something is good or if its selfish, and if either of those motivations are necessarily "bad." But even if it's impossible you'll probably end up beating that dead horse for as long as you possibly can.

"I should just never ever leave the house again ever and commit to the wholly simple life of nothing wherein I eventually buy a bunch of fish and die alone."

OK, so we have a little bit of a flair for the dramatic. A little. In our defense, at this point, our brains are whirring at about 900 miles per hour and it's a miracle we haven't just gone to PetCo to buy all the fish and make this a "thing" as fast as possible.

"The only end to this torture is deciding already."

The dark, cold, terrible reality is that, at some point, the decision is going to have to be made, and because you have already committed so much of yourself to the sublet in Crazy Town where you've spent the last few days weighing all your options, this final hour is all the more torturous. The thing about us over-thinkers, though, is that for the most part, once the decision is made, we make it without looking back—which is a small relief considering all the hell we have to go through to get there.